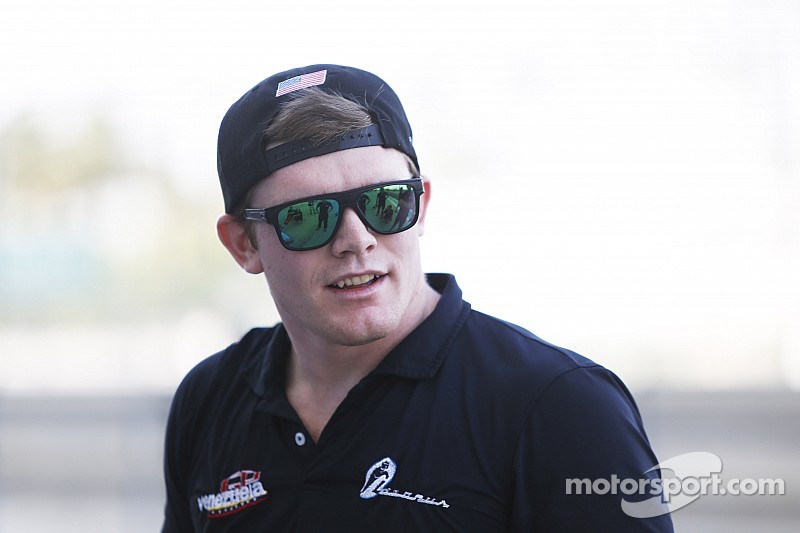 Conor Daly: "You have to be at a higher level of aggressiveness, focus, technical understanding and mental toughness."

Indianapolis, IN - Conor Daly spent the first week of the new year training in Florida for the upcoming 2015 season. With the first race fast approaching, social media is still buzzing with questions asking what will he be doing this season? He took time to sit down in Fort Myers Beach recently to answer some direct questions.

You just finished your 4th season of racing in Europe (three years GP3 and one year GP2). What's next?

Right now we are working as hard as possible to get me in an IndyCar for the 2015 season.

Was it a good decision to go to Europe?

Everyone told me growing up and going throught the Mazda Road to Indy that it would be a huge addition to my career if I went to Europe. I think it was a great decision because it is the toughest environment in the world to develop as a driver. You go up against the best, and force yourself to learn and focus at a higher level. I can't wait for an opportunity to use this experience competing at the top level of the sport - IndyCar.

What did you learn that is different from what American racing offers?

There was a lot learned over the last few years. Some of the main things I learned were to work at a higher level than I ever have before. You have to be at a higher level of aggressiveness, focus, technical understanding and mental toughness.

In the first GP2 test of the 2014 season in Bahrain, you were in the top five fastest for the Lazarus Team, but the season did not produce the results you were expecting; what happened?

It was a frustrating season for sure. In race conditions we were always amongst the fastest, but in qualifying, we just could not get the Pirellis into their small working window. I was not in a position to bring budget to the team and it was difficult for them to keep everything together. For Monza, they had to take a pay driver and then I was back again for Abu Dhabi, where I had one of my best races missing fastest lap by less than a than a tenth. Although it was frustrating, it was a great experience for me.

As you look back on the past four years, do you now think you are better prepared for IndyCar?

Without a doubt. I am now prepared to take advantage of an IndyCar opportunity. I feel like I have an extremely solid base of experience to move forward with a team at a high level. A GP2 car is similar to an IndyCar performance wise on road courses. I love ovals and have won on them in the past, and I've got an Indy 500 under my belt. All I need is that opportunity!

I don't know if you can call it more intense. I think you can say there are more competitive entries than American, which provides for a closer more aggressive field.

In years past the European training ground was highly touted as the best training for a young driver. You did that for four years yet it does not seem to have helped you get a seat - is the perception now different?

I think the perception has changed slightly due to the economy and the lack of team sponsorship these days. The pure opportunities, meaning chances given to drivers without a price tag attached are appearing less and less. I think I gained some respect from IndyCar teams after competing over there for several years, so hopefully that will turn into something over the next few weeks.

Would you have been better off staying in Indy Lights when you were leading the championship after winning Long Beach in 2011?

I ask myself this question a lot actually. After seeing Josef Newgarden enter his 4th year in IndyCar, making a living and doing such a great job, it makes me wonder whether I made the right choice. However, I don't like to live in the past, I am always looking forward. No matter what, I am proud of what I accomplished in Europe and am ready to move forward with my career whatever direction that may take me.

You were a bit of a trend setter in Europe. You started taking the American flag onto the podium and now we see a lot of drivers doing the same thing. Do you think it's important for a driver to represent a country?

I think it is extremely important and I am proud to be an American, wherever I compete in the world.

You also dared to defy the FIA by doing donuts after you won in Spain - something that no European winner had ever done. Vettel did the same thing later that year after winning the Indian Grand Prix and you were given credit for it in social media. Was that just a spontaneous move?

Well to be honest, yes - it just happened. It's so hard to win in Europe that when it happened, I just felt a need to celebrate. I was summoned to the Steward's office for an explanation though. Ironically, the FIA now allows drivers to do donuts.

Formula One appears to be putting younger and younger drivers in the seats. Why do you think IndyCar does not recognize young drivers like Formula One does?

I don't know why but I hope IndyCar teams see the importance of having a constant flow of new talent coming into the sport. It will be extremely important to have a next generation of young drivers get a chance to show what they can do and generate interest for new young fans. There is nothing I would like more than to have the American flag on the IndyCar podium with donut smoke still lingering in the air.

Do you have an opinion on Red Bull putting a 17 year old driver (Max Verstappen) into Formula One?

I think it is bold and potentially dangerous career wise for such a young driver. But if I got that kind of an opportunity, I would grab hold of it as quick as possible. It certainly got people talking!

Last year you had a great run in the Rolex 24 at Daytona. Will we see you there again this year?

At the moment no, I have been 100% focused on IndyCar and have not had time to pursue a sportscar drive. However, I would jump at the chance if offered an opportunity.

Thank you Conor and bet of lucks this season.