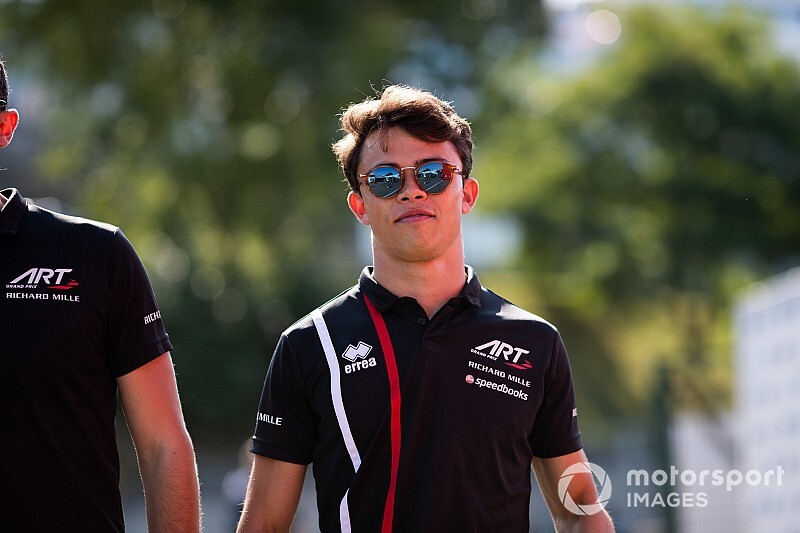 Formula 2 points leader Nyck de Vries set the fastest time in the practice session at the Hungaroring despite a late spin.

The session was suspended when Ralph Boschung – who had put together a deal to run with the Trident Racing team after battling budget issues all year – crashed at Turn 1 with 18 minutes remaining.

He appeared to lock up before his car went nose first into the outside wall. The Swiss driver emerged from the car with a thumbs up and walked to a nearby ambulance.

The session was also affected by a brief virtual safety car period after Sean Gelael – who missed the Silverstone races – spun his Prema-run car at Turn 8 with 33 minutes remaining.

After the Boschung crash, the session resumed with 12 minutes to go, but most drivers failed to improve.

De Vries spun with six minutes remaining, but still sealed the top spot in the session.

Mick Schumacher recorded his best result in an F2 session in his rookie year, the Prema Ferrari junior sealing second with a time set in the first half of the session. He was just under 0.3s slower than de Vries.

Anthoine Hubert almost crashed at Turn 1 in the early running, and had an aggressive battle for track position at one point with fellow Renault junior Jack Aitken. But the Frenchman wound up third in the final classification, ahead of Jordan King, who had come straight from a Formula E test in Spain earlier in the week.

Guan Yu Zhou – the top rookie in the points standings in sixth – emerged with three minutes remaining but didn’t improve on his fifth-best time set earlier in the session for the Virtuosi Racing team.

Aitken sealed sixth ahead of Sette Camara, whose DAMS squadmate Nicholas Latifi was twice blocked on rapid laps, and had to settle for 12th.