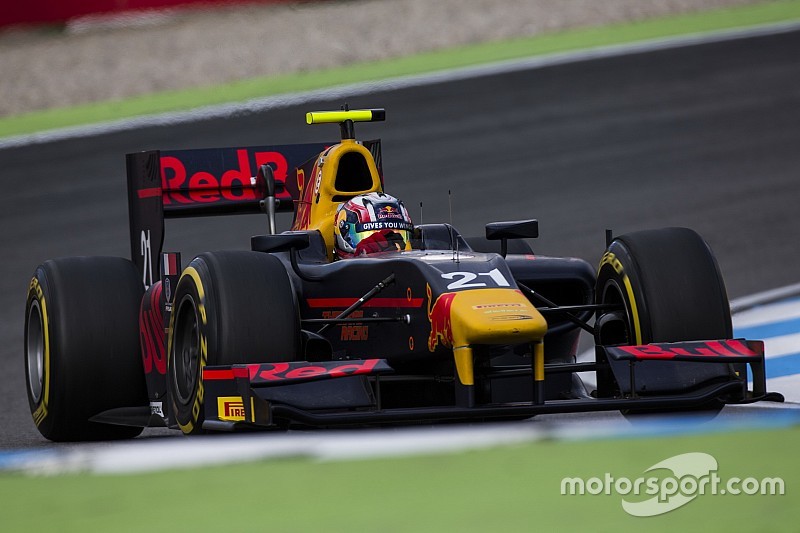 GP2 championship leader Pierre Gasly has been disqualified from the feature race at Hockenheim, where he had originally finished third.

The Red Bull junior bogged down off the line from P2 but recovered to complete the podium behind Sergey Sirotkin and Luca Ghiotto.

However, the fire extinguisher in his car had gone off during the race - and the stewards subsequently ruled in post-race checks that "the car did not comply with the safety equipment regulations".

As such, the Frenchman loses his 15-point haul from the race and will also have to start Sunday's sprint from the back, instead of sixth place.

The ruling gives Russian Time's Raffaele Marciello a spot on the podium in the feature race - and promotes Gasly's teammate Antonio Giovinazzi to eighth, meaning the Italian will line up on pole on Sunday.

Despite the penalty, Gasly remains as the championship leader with 107 points to his name.

However, the Frenchman now has three other drivers less than nine points behind him - with Sirotkin at 101 points and Giovinazzi and Marciello both at 100.

Gasly wasn't the only driver to to pick up a penalty after the race, as Russian Time's Artem Markelov and MP Motorsport's Daniel de Jong were both handed five-place grid penalties for collisions with Jordan King and Sean Gelael respectively.

As neither finished the race, they will start from the pitlane.