In his latest column for Motorsport.com, Ferrari junior Charles Leclerc looks back at another eventful F2 weekend in Silverstone - and, in particular, a dominant yet very stressful race win.

It's true that we've been quite strong all around since the beginning of the season, but Prema and I expected a difficult round at Silverstone all the same.

It's a venue where the British drivers are generally very fast, as they know the track so well, and it is a high-degradation circuit.

At the same time, we knew we should be strong in qualifying. Practice went very well and to then take pole by 0.458s was a good surprise. The gap was helped by the track being quite long, but the lap was good – I was happier about it than the previous pole lap in Austria – and the car felt great.

The pole position, our sixth in a row, also allowed me to equal Stoffel Vandoorne's record for most consecutive poles in the series, which is absolutely not something I could've expected heading into the year.

Already the first pole at the start of the season in Bahrain was a big surprise, as was the second one in Barcelona – but now we're at six, and it definitely feels good.

But our main focus was right away on the race, as that was our big concern. Silverstone is a very high-speed track and the front tyres are very hard to keep alive until the end of the race.

We had encountered heavy tyre degradation in Bahrain and Barcelona, and also a bit in Austria – and that was the part where I felt I struggle the most, so I really had to focus on it. 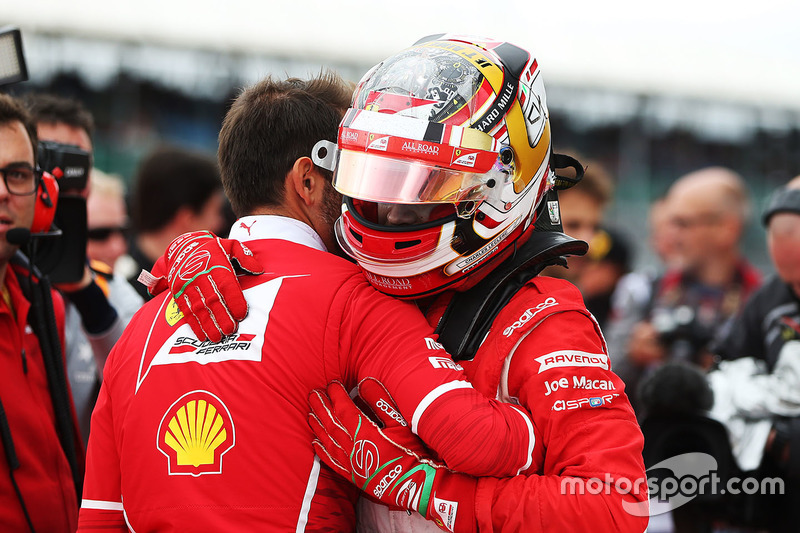 On the lap going to the grid for the opening race, I was trying very hard to warm up the brakes, as the temperature at Silverstone was quite low compared to what we usually have during the season.

Maybe I had worked them a bit too much because when I arrived to my starting position, I saw that the left-front brake had caught fire, which was a bit worrying.

Thankfully, it was stopped quite quickly and there were no big consequences, so the start and the first stint went great. We were very fast on the option tyre, building up most of the gap to the rest during those laps – because the pace was just very good. I had clean air, I could push but the tyre also held up well, as I did one lap more than most of the others who started on the option.

Towards the end of that stint, I was driving on the straight when I saw, on a big screen to my left, that somebody's car was smoking. Initially I was worried about a safety car, as you need to react and pit as soon as possible if it's called out – and then I saw the smoke was actually coming from my car.

I glanced in the mirrors to confirm it and, at that point, I wasn't really all that panicked – because, anyway, when you see the smoke, normally that means the engine's gone and there's nothing you can do.

But the data on my steering wheel didn't show a problem. I radioed to my team about it and they didn't know what the cause was. By that point, I was still expecting I'll have to pull over any second because when it's smoking like that, usually you don't finish the race.

Two corners later, I looked back at it again – and now there was a lot less smoke. I didn't know it then but the whole situation was because some oil had leaked into the exhaust. The flames picked up a bit when I pitted, but they were gone once I was back up to racing speed.

From that point on, it was quite okay. On the primes, I was going quite slow because we were worried about graining and I tried to stay calm, even as I heard that Norman Nato was closing up behind.

Then I started to push again. With a couple of laps to go, I went to look in my left wing mirror and found that it wasn't there as it had fallen off a few laps later.

So the end was stressful – I was worried about getting a black-and-orange mechanical flag, which would've forced me to stop and would've ruined my race, so finally seeing the chequered flag was a relief. Even then, there was still concern in my mind that whatever caused the fire could lead to a technical disqualification. Thankfully, it was all good. 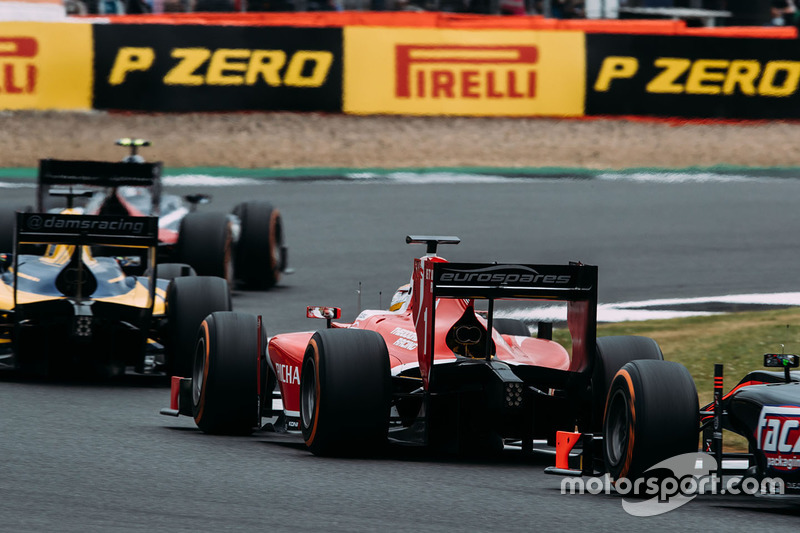 The second race was also good because our pace was amazing, even though we did get stuck behind Sergio Canamasas initially. He was very hard to overtake – and I didn't want to take stupid risks because it's anyway always difficult to pass Sergio.

Eventually, I got around him on the outside after a good fight and the pace from that point on was strong. I did the fastest lap and felt I saved my tyres very well for the end, but unluckily there was a safety car.

Oliver Rowland had a five-second penalty up ahead and, to be honest, I'm not very happy about what he did at the restart. He was running third and he held us up, allowing the front two to escape.

I don't know if he was trying to to throw me off, maybe he was trying to give himself clean air and to then push and minimise the effect of the penalty, but it didn't really work out for him.

Artem Markelov passed him and I was trying to get by as well, but I got held up behind him – and in the end Sergio managed to come back at me and overtake, which was a good move, fair play.

It was a shame to miss out on a chance to get on the podium, but it was anyway good points taken again.

I wasn't happy with the final laps, although I understand Oli is trying to make up as many points as possible. So the whole thing doesn't change anything for me, there's no added tension in the championship battle. 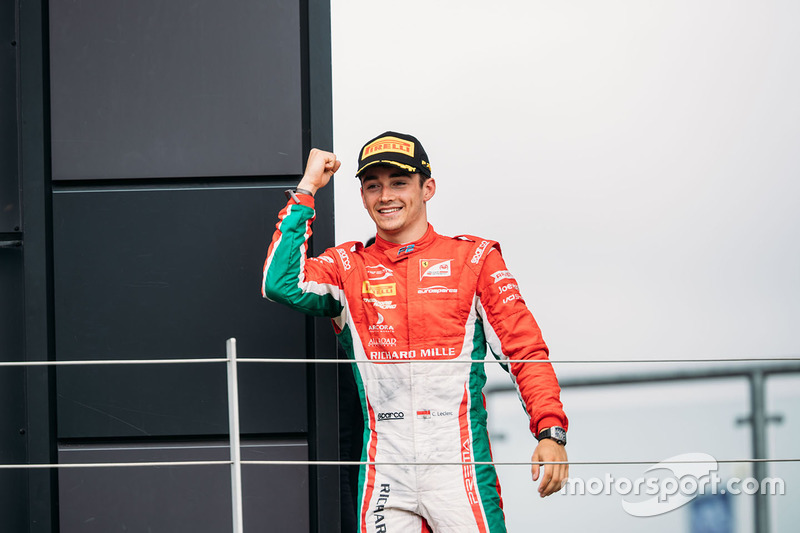 To be 67 points ahead in the championship is amazing, and I think it shows how competitive we have been since the start.

But, and I think I'll keep saying this until the end of the year, we have to keep pushing – the points lead is one thing, but another aspect that's very important, especially for my future, is impressing people.

The track coming up next – the Hungaroring - has been quite good to me in the past, and I think Prema's car was very fast there last year.

The final stretch of the season still feels quite far away, and I don't see the Hungary round as one where we can win or lose the championship.

Yet it is definitely a good place to try to extend the points lead even further, which would be perfect heading into the summer break. 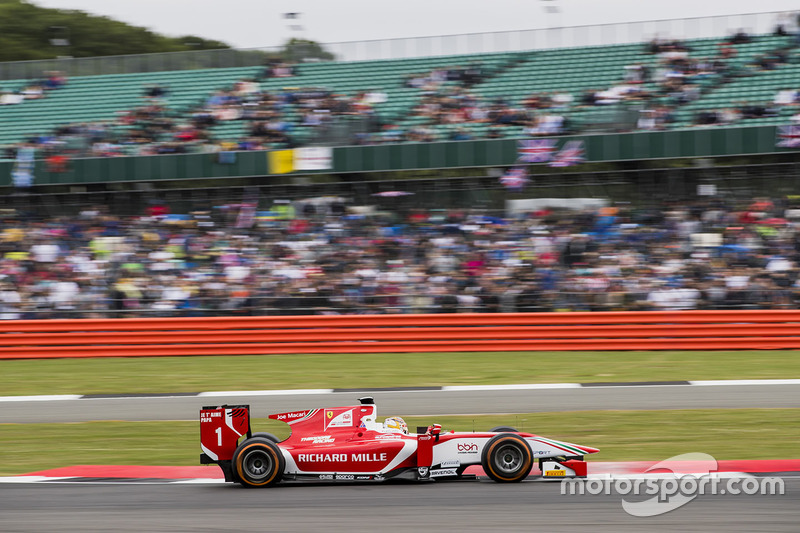