Matsushita has "adapted back" to F2 after Super Formula stint

Honda Formula 1 junior Nobuharu Matsushita feels he has got on top of Formula 2’s high-degradation Pirelli tyres again after spending a year away in Super Formula. 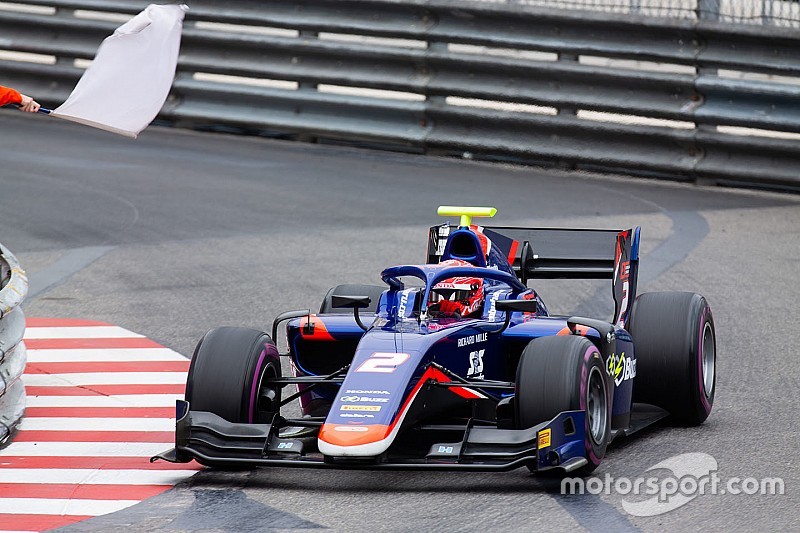 F2 returnee Matsushita had to relearn how to nurse the Pirelli tyres used in F1’s main feeder series, having got accustomed to low-degradation Yokohama rubber during his stint in Japan last year.

The Japanese driver particularly struggled in his first race since his return, losing as much as five seconds a lap in the closing stages of the Bahrain feature race.

Since then however he has shown a marked improvement in his performance, qualifying on pole in Baku and taking a podium finish at the previous round in Monaco.

Matsushita says with four rounds of experience under his belt, he can confidently say that he has got used to F2-spec Pirellis again.

“In the beginning I struggled a bit to save my tyres, I think now it’s fine and the next race is France [at Paul Ricard] and that’s like coming back to a normal track, so let’s see. I would like to prove that [we can manage the tyres],” Matsushita told Motorsport.com.

“Last year I was doing Super Formula and there is no [tyre] deg. You push every lap.

"Here you have to take care every lap. It’s the same, I’m just adapting back to it. The car is a little bit more heavy, the feeling is everything is heavier. Now I’m back to being quite ok.

“We are happy with qualifying but for the races we’ve had big deg. But now I think it will be fine for the rest of the season.”

Matsushita has been unfortunate on a number of occasions so far in 2019. A pole position in Baku was followed by a technical issue in the race and in Spain his engine caught fire.

But after a return to podium in Monaco, the 25-year-old is hoping that the worst is behind him.

“Obviously we had a lot of disaster weekends,” Matsushita said. “We could have had more podiums for sure and had many issues.

“In free practice [in Monaco] we could only do one lap, but finally I’m on the podium. I took fastest lap as well.

“I have a new car [in Monaco after the Barcelona fire]. Because everything is new, there was not enough time to check everything before practice. I feel really bad for this. Hopefully for the next races, no more problems.”

Honda, which supplies Red Bull and Toro Rosso, is keen to see a Japanese driver back in F1, but Matsushita only has 10 of the 40 required superlicence points.

He therefore needs to finish fourth in the points this year to qualify for one, but he currently sits only 10th on 26 points - 36 shy of fourth-placed Jack Aitken.

Asked if F1 was still the goal, Matsushita replied: “That’s why I’m here, obviously. I need results, and need to have weekends like this [Monaco] every weekend."