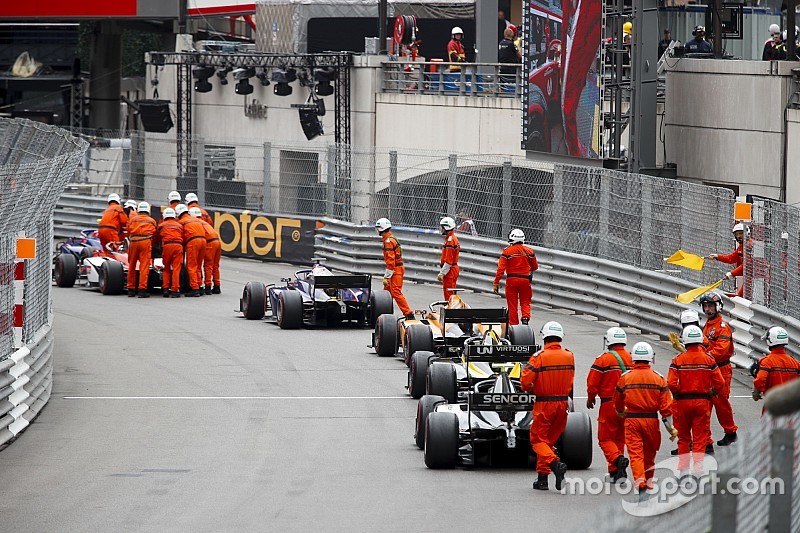 Formula 2 teams and drivers remain confused over why more than half the field were a lap down after the red flag caused by Ferrari Formula 1 junior Mick Schumacher.

Schumacher clipped the right rear of Tatiana Calderon’s Arden-run car at La Rascasse and sent her into a spin, blocking the track for the cars ninth and down the order.

The cars were re-ordered in the pits, and those that were ninth and below were not given a chance to get the lap back they had lost as a result.

The drivers who ended up lapped were in that position because they were put behind cars that had officially completed one lap more before the red flag in the pitlane.

This meant that the order of the cars was correct, but those behind the top eight were showing as a full lap down.

As the timing system was not adjusted, these drivers remained 'lapped' – and were not allowed to unlap themselves under the safety car.

Article 42.3 of F2’s sporting regulations, which relates to the procedure for lapped cars when resuming a race, was not followed.

The rule states: "At the two minute point, any cars between the safety car and the leader, in addition to any cars that had been lapped by the leader at the time the race was suspended, will be allowed to leave the pitlane and complete a further lap, without overtaking, and join the line of cars behind the safety car which left the pit lane when the race was resumed."

No official explanation has been given but one is expected once an investigation into the procedure during the race suspension has been completed.

Should the usual procedure have been followed, the top eight – yet to pit – would likely drop behind the lapped cars after stopping, which would have mixed up the order dramatically.

Some teams and drivers believed the timing screens would be corrected and therefore pushed hard as they believed they could make up positions. As it happened, this was extremely unlikely as they were a lap down and remained so.

Feature race winner Nyck de Vries said: “We were forced to change tyres [under the red flag] to make a gap.

“If we didn’t make a gap after the red flag we would have been behind the people who had pitted behind us.

“So we were forced to really push after the red flag to make a 25-second gap to the drivers on the alternative strategy who boxed earlier than us. We were kind of forced into that strategy.”

De Vries, however, didn’t require the 25-second gap as those from ninth place down remained lapped. Many of the drivers in the top eight now face a tyre shortage as they used an extra set to try to build the gap to the cars on the alternate strategy, and may have to use scrubbed tyres tomorrow.

Points leader Nicholas Latifi told Motorsport.com: “I honestly didn’t know we were a lap down, I don’t think the team knew 100% until the end of the race. I think this was a mistake from race control.

“I was pushing flat out because I thought ‘if I can get past these guys, maybe I could get on the edge of P8 or P9 after the others had pitted.

“For me, this is a mistake from race control which you have to analyse because I think something like this has happened before.

“Even if they put the leaders to the front in the pitlane, just take a lap off for us [the lapped cars].”

Latifi was out of position on the alternate strategy, and had a number of incidents in the race with other drivers, receiving a drive-through penalty in the closing stages for causing a collision with Sean Gelael.

His lead was cut from 26 points to just one point, with de Vries taking over second in the standings.

Explaining the incident that caused the red flag, 14th-place finisher Schumacher said: "When I was catching up to Tatiana, I was around two seconds faster and I knew I needed to go by. In that section of the track she was pretty slow, so it was a bit of a 'now or never' situation.

"From that point onwards the race was obviously compromised. For sure it was not the race we had expected, but that's Monaco. Really a special track.

"We logged a lot of laps, I felt comfortable and quick, so we will try to be back motivated tomorrow."

For her part, Calderon, who retired in the pits and was the last classified finisher in 16th, told Motorsport.com: "I saw him coming from a few laps before, I was trying to survive on the primes.

"To be honest I never thought he would try and make the move there, I just felt a little touch on the rear right and spun. [There was] nothing we could do."