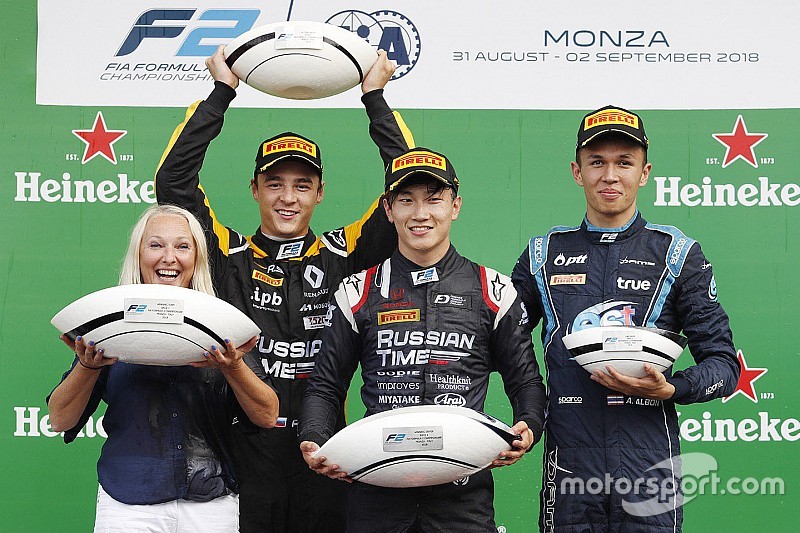 Makino was one of three drivers to start on medium tyres and, despite lining up on the grid only 14th, he found himself leading the race in just five laps as the rest of the field on supersofts struggled.

He took the lead away from Markelov, who remained his closest rival after everyone on supersofts pitted over the course of two laps, the gap between them the pair staying at around 45 seconds.

Makino maintained most of his advantage, only allowing Markelov to cut it by around five seconds and, when he completed his pitstop on lap 28 of 30, he rejoined two seconds in the clear.

On fresh supersofts, Makino cruised to the finish to take his maiden win, becoming the 10th different race winner in F2 this year, with Markelov completing a Russian Time 1-2.

Markelov was the early leader of the race from fourth on the grid, helped by Sergio Sette Camara (Carlin) having to pit at the end of his formation lap, and pole-sitter George Russell bogging down.

He was temporarily passed by Alexander Albon (DAMS) but repassed him before they pitted for mediums.

As Albon lost out to Russell in the pits, the championship leader also passed Markelov on fresh mediums, but the Russian once again fought back and then led the group that started on supersofts until the finish.

Russell was subsequently passed by Albon, who ended up completing the podium, and the Mercedes junior was then engaged in a thrilling fight with title rival Lando Norris.

Carlin driver Norris pulled off a tight move from the exit of the opening chicane, but could not hold on as ART's Russell fought back and eventually secured fourth.

Norris also fell behind the second DAMS car of Nicholas Latifi, settling for sixth, and is now 13 points behind Russell in the standings.

His teammate Sette Camara impressively recovered from dropping to last as he pitted at the end of the formation lap to seventh and set the fastest lap of the race.

MP duo Ralph Boschung and Dorian Boccolacci were the other two drivers on the same strategy as Makino, and spent most of the race second and third after the early flurry of stops.

While Boccolacci couldn't keep his tyres alive long enough and had to pit too early before retiring with a car problem, Boschung rejoined from his tyre change in seventh, and only lost two places to take ninth from 18th on the grid.

Jack Aitken and Arjun Maini both retired from the race, while Alessio Lorandi was hit by Roy Nissany on the braking point into the Roggia chicane, the duo rounding out the order in 16th and 17th respectively.