Binder tested cars for both Venezuela GP and Racing Engineering. The Austrian talks about the test at Jerez and his hopes for the future.

The 20-year-old Tyrolean had also completed a successful test for Racing Engineering the day before to get a first taste of the former Spanish Grand Prix circuit. 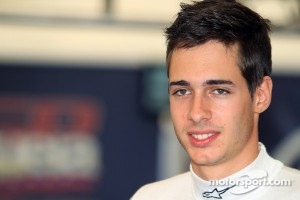 Ahead of a well-deserved winter break, Rene speaks about his personal hero and his goals in the official feeder series of Formula 1…

Rene: "In fairness we have to admit that a few drivers had no new set of tyres left in that final afternoon session, however, on the other hand side, my overall lap time would have been quicker as well, if we had mounted a second set in the faster morning session.

Anyway, our mission was to focus on our own programme which we managed to do. So overall, the Jerez test was important and the best motivation for me to work even harder over the winter."

You have a professional team behind you including Ayrton Senna's former physio and coach Joe Leberer, who has prepared a few young hopefuls for F1…

Rene: "I am very thankful for that support as Josef knows exactly what it needs to become a better athlete and driver. My training has become rich in variety and we have even included some elements of boxing work out together with my manager.

Racing has become a very complex discipline and it is pretty obvious that you cannot just build on pure talent."

Your grandfather started as an Alpine herdsman to set up his own timber trade company in the 50ies that is meanwhile one of Austria's leading wood industries. Is he your persoal hero?

Rene: "Yes, of course. It is an incredible story that was published in his personal biography and my grandfarther was the one in our family who started to race as he even won the Austrian rally championship.

The secret of his success was hard work and confidence. And I think that was also the concept of my uncle, Hans (Binder), who was the first Tyrolean Formula 1 driver."

It is hard to believe that a small alpine region gave birth to 3 Grand Prix drivers with Gerhard Berger, Karl Wendlinger and your uncle. So as we know that you are an excellent skiier, is there any correlation between racing on tarmac and snow? 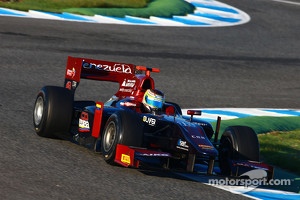 Rene (laughs): "I would hope so, as in winter time I spend at least 30 days on skis.

Even if I don't compete in races, which wouldn't be allowed by any team principal.

Anyway, we cannot expect that being a Tyrolean is an advantage in motorsport as from a commercial point of view it would be better today to come from China or India. So everything I can do is to work hard in order to become a frontrunner in GP2 as this is the official feeder series."

Rene: "It simply proves that the GP2 car is the perfect machine to get ready for the ultimate step, especially with the current tyre situation that is a completely new challenge.

In my opion it had a very positive effect on our sport as racing requires more strategic cleverness and better car control again, especially in race conditions.

And the most important aspect for me is to know, that there is not a huge difference in the power of GP2 compared to F1 with V8. That's at least what GP2 graduates say after their maiden test in a Grand Prix car."

So tell us about your preparations for the 2013 season, as you are aiming for your first full season in GP2…

Rene: "Well, that's the plan and I believe that I am ready for the next step. Having the experience of 3 race weekends in GP2 I am now fully motivated to optimize my potential.

As said before my race pace was already there, so what I have to focus on is my qualifying speed and a perfect tyre management.

As a preparation I will definitely spend some days in a simulator and, in addition to my fitness training, complete an intensive karting programme in Italy and Germany."

Fast forward to this time next year, what achievements would you be happy with?

Rene: "I hope that by the end of 2013 I am able to get the maximum out of the car and make the most of my opportunities. To be honest, I am quite confident that I can deliver some good results but predictions are always difficult."

Postseason testing for Gianmarco Raimondo as he prepares for 2013