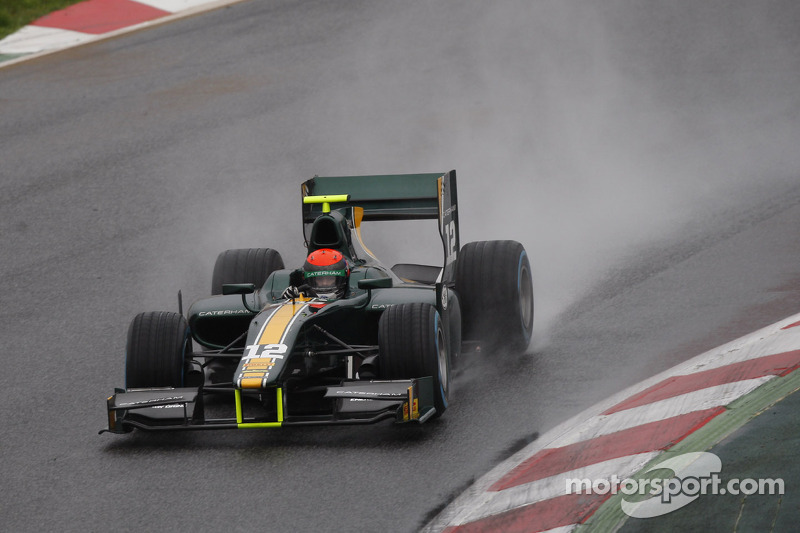 Day two of the first post-season test session opened this morning at Circuit de Catalunya on a very wet track with rain pouring down incessantly. It took a while before the first drivers braved the tricky conditions in order to do their installation laps. Kevin Ceccon at Ocean was the first one to feed on to the track, but it was Sergio Canamasas at Lotus GP who set a first laptime albeit a pretty slow one compared to yesterday’s best time.

The minutes ticked away and the rain kept on coming down. Only a handful of drivers set a laptime. Jolyon Palmer at iSport broke under the 2min barrier ahead of Eddie Cheever Jr (Coloni) and Canamasas. Halfway through the session, Nigel Melker at Racing Engineering went top ahead of teammate Facundo Regalia, but the Argentinean improved and went quickest before the session was briefly halted after Rene Binder (Lazarus) spun and stopped at Turn 5. 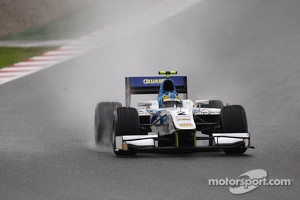 The skies eventually took pity on the GP2 field and the rain stopped for the final hour of the session. Alexander Rossi at Caterham took control of the timesheet ahead of Daniel Juncadella at Rapax and returnee Pal Varhaug at iSport. On a drying track, the laptimes slowly improved, but the session was red flagged twice as rookie Sergei Sirotkin (DAMS) lost control of his car at Turn 4 and as Rene Binder also spun and stopped at Turn 6. At the chequered flag, Regalia was leading Canamasas, Rossi, Melker, Daniel De Jong, Adrian Quaife-Hobbs, Varhaug, Arthur Pic, Juncadella and Stefano Coletti.

After a one hour lunch break, the cars were back in action on a less damp track. Coletti, De Jong and Cheever Jr were the first ones out. Laptimes dropped as the track dried out and Canamasas set the early pace but was soon bettered by iSport duo, Varhaug ahead of Palmer. The session was interrupted after the Norwegian and Pic both went wide and stopped in the gravel bed.

At the restart, the sun came out and hopes to use the slick tyres arose. Melker went quickest ahead of both Trident cars, but Coletti improved and claimed the top spot just before another red flag halted the proceedings after Rene Binder spun and stopped at Turn 7. The track went live again and Rossi dipped under 1m32s and went top ahead of rookie Daniel Abt. 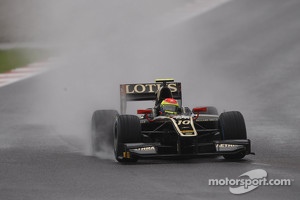 Another two red flags interrupted the session: Juncadella first went wide at turn 4. Soon after the restart, it was Lucas Foresti who lost control of his Caterham car also at turn 4. With 30 minutes left on the clock, the proceedings got going again and most drivers hoped to get the most out of their new sets of tyres. Quaife-Hobbs found some extra pace amid traffic to slip into P2. A final red flag concluded the day courtesy of Varhaug who crashed into the barrier at turn 4.

Rossi finished on top ahead of Quaife-Hobbs, Melker, Trummer, Abt, Coletti, Rio Haryanto, Canamasas, Juncadella and Kevin Giovesi. The GP2 paddock will gather in three weeks time in Jerez for the second and final post-season test session of 2012.

Filippi sets the pace in day one of Barcelona testing