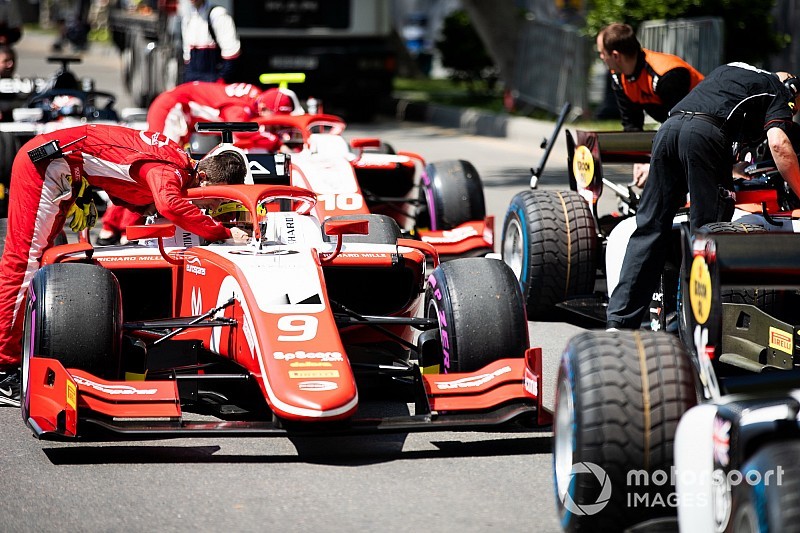 Mick Schumacher says he has learned from his mistake in the Baku Formula 2 feature race and insists that “it won’t happen again.”

Schumacher spun his Prema-run car early in the race, and was classified 19th, before recovering to fifth place in the Sunday event.

The German has had a tough baptism in F2 thus far, and currently lies ninth in the championship.

“In general I think there were a lot of positive sides, also in Race 1,” he said of his Baku weekend. “Obviously the spin was one of the biggest negatives in it, because there was a lot of potential in getting a lot of points.

After the challenges of Bahrain and Baku, Schumacher played down the significance of coming to Barcelona, a track he has tested at.

"But still for me it’s really important for me to learn, and try to be as consistent as possible over the whole year, and not repeat a mistake like I did in Baku.

“We’re very early in the season. Obviously we have very experienced drivers [on the grid], but nevertheless if you manage to be consistent, gather points, there is for sure a possibility to be in the mix in front.

“It’s really, at the moment, just trying to learn, and if you’re able learn and every time take that experience and try to improve from that, that’s when also the consistent points will come in.”

Asked by Motorsport.com if his learning curve had vindicated his decision not to try to jump straight to Formula 1 after his European F3 success, Schumacher said: “I think F2 in many ways prepares you in a very good way for F1, not only because we don’t have a lot of sensors, so the tyres, you really have to feel it, you have to go into the lap and know whether the tyre is ready or not.

“And then you have to also feel how much you have to prepare the tyres to be ready. And this is something that I feel helps you a lot for F1, because the gap between F3 tyres to F2 tyres and F1 tyres is quite big. So I think it was the right step for me.”

Schumacher says that he is starting to understand the Pirelli F2 tyres better.

“Baku in general is completely the opposite of Bahrain. Baku is the least tyre deg that you will have of the year. In Race 2 when I went from P19 to P5 I was pushing nearly every lap.

“We didn’t have that many laps because of the safety car, but as I was driving I felt very comfortable, also regarding the cars on front, they seemed to struggle a lot more than ours. I think that was something very positive.

“And also Bahrain, the tyre management was OK, and I felt good. Maybe I even under-pushed a bit much at the beginning, I was trying to save the tyres too much, and I was able to still do very good lap times at the end of the race.”