Sergey Sirotkin: Hungary win proves we can get it done 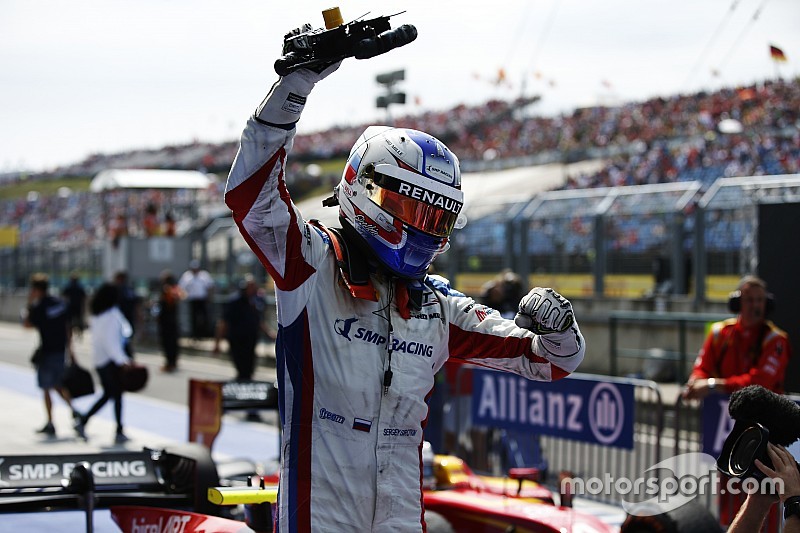 Finally, our efforts with ART Grand Prix have been duly rewarded at the Hungaroring, as we scored strong points and picked up our first race win of the year. Yes, we couldn't really fight for pole, and, yes, there was a problem with the start in the Saturday race – but we recovered and ran extremely well in race trim.

It was a good weekend. Our car was one of the fastest out there, if not the fastest, from the very beginning.

But in qualifying, unfortunately, we couldn't contest pole position. We got on the front row, but we just didn't have the speed to challenge Gasly and Prema.

His half-second advantage was perplexing. If it was half a tenth, there's ways to approach that, you can find that time somewhere on track. But half a second – even more than that, almost six tenths – is unreal. And it wasn't one lap for him, he went much quicker on several attempts.

Getting back on the podium

As it so often has been this year, the start was problematic in the Saturday race – more on that later.

Anyway, I was fifth or sixth out of Turn 1, passed my teammate round the outside of Turn 2, then followed Nato until the pitstop, both him and myself running the softer compound.

I couldn't really pass him, so we decided to go for an overcut. When he made his mandatory stop, I stayed out for another lap, upping the pace by 1.4s. That was encouraging, so we opted to do one more lap on these tyres. And it was faster still, but Nato, on new hard tyres, went even quicker.

As a result, I rejoined close behind him. But just a lap later, I tried to give him a scare into Turn 1, leading to him locking up and getting a worse exit – and, into Turn 2, I just dived down the inside, and that was that.

Giovinazzi was next up the road, and he had an easier time dealing with traffic. He managed to pass two cars at once on the main straight, while I then lost time dealing with both of them, which hurt my tyres as well.

I caught Giovinazzi again shortly thereafter and was following him until the end of the race – but even though I tried to be careful with the tyres, the wear was much worse in the dirty air. So by the end, when I started to attack, I hit the cliff with about half a lap to go and had to settle for third.

After the bad start on Sunday, we took apart the clutch and we found the problem. As a result, on Sunday, we got what could very well be the best start of all this season – P6 to P2, a return to form shown last year.

I lined up behind race leader King on the safety car restart, and he went for a rather smart tactic when the race got back underway, going on the throttle in a place where I didn't expect it.

So, immediately, he had a bit of a gap, but he locked up in the penultimate corner, going off-track.

I'm not sure whether it would've been illegal to pass him there, but I figured I'd get another chance to go for victory and I let him back ahead.

Then we ended up side-by-side in Turn 1, then Turn 2, where I changed direction on him on exit to then go around the outside of Turn 3 for the lead.

From that point on, in clean air, the pace was ideal. I did not push to the limit at all, just managing the gap, in case there was a safety car or something like that.

In the final four laps – when I knew that, should anything happen, the race will not restart – I decided to up the pace, and the gap grew from 2.5s to 4.9s.

It's great to win, but it's a bit of a shame about Sunday's start. On race pace, even compared to the Prema duo, we were faster. But it's just so tough to pass around here.

We're now 37 points off the championship lead, but I'm trying not to think about the title picture yet. For now, we'll take it one race at a time and it's important to keep spirits high. This weekend will have made that an easier task, because we proved we can get it done.

The mindset from last year, when I had lots of fighting races, with aggression and overtakes – I think it's back and it's important I keep hold of it.

It'll be crucial, now, to keep clawing back ground to the leaders and, by the end of the season, we can start thinking about points.

It's good that Hockenheim is soon – to be honest, I'd be okay with racing every weekend. But it'll be especially welcome if we can maintain the form we've shown in Hungary.

Lynn: "DAMS isn't where it was last year"

Evans: "I haven't paid a single dollar" since first year of GP2