Sergey Sirotkin: Making the most of Baku havoc 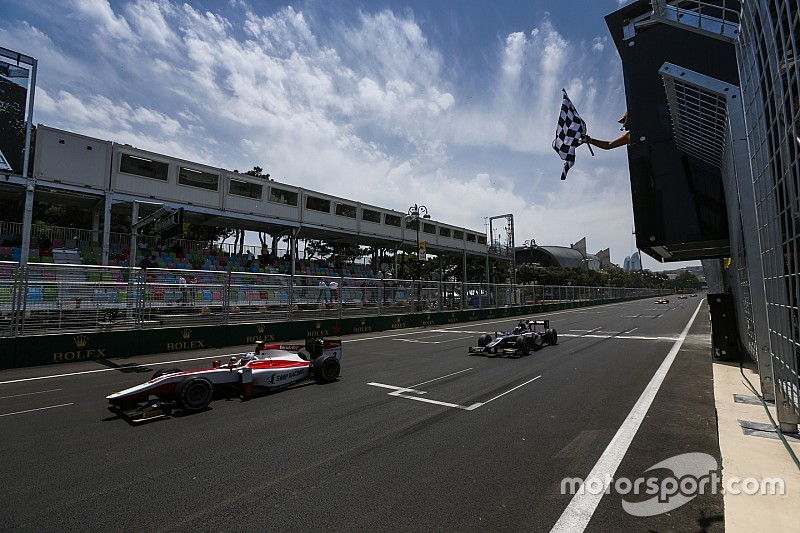 Motorsport.com columnist Sergey Sirotkin looks back at his performance in GP2's chaotic debut in Baku, where the Russian claimed two podiums despite significant damage to his car.

The past weekend of GP2 racing in Baku left me with a mixed feeling. On the one hand, I felt I wasn't as comfortable with the car as I had been in the first two rounds of the season, and a first win of the season continues to elude me.

On the other hand, after having had little to show for my pace in Barcelona and Monaco, I leave Baku with two podiums and a healthy points haul.

That it was going to be an up-and-down weekend was clear from practice, which was a tough one. I consistently encountered traffic, including on my best lap, which I also had to do without DRS because of the yellow flags.

All considered, third in the practice timesheets wasn't so bad, but I couldn't say we had done a particularly thorough job, which would've been nice ahead of qualifying.

In the shootout for pole, I had my usual luck, with yellow flags coming out on my flying lap and disabling DRS, which, at this track, is worth something like five or six tenths.

Then, in Turns 3 and 4, I ran side by side with, I believe, Nato, before having to pass a car on the inside of Turn 8.

If I had encountered none of those issues, I think it would've been a pretty good lap – pole or within a few hundredths of pole. Instead, I lined up third.

Then again, on this track, where you qualified clearly didn't matter too much.

My initial start in the Saturday race was actually quite good, but poleman Giovinazzi's was not, and he nearly stalled right ahead of me.

I had to react quickly to avoid him and released the throttle as a result. The revs dropped down, albeit nowhere near enough for the anti-stall to kick in – and yet it kicked in anyway, putting me into neutral gear. When I switched back to first and accelerated, it was too late.

And, with Giovinazzi managing to get going after all, to an onlooker it would've appeared that I made a complete mess of the start, but it did not look like that at all from my side.

The rest of the race was far from easy. At Turn 5, I went to overtake King on the outside, but thankfully realised in time that he did not see me. I slowed down but contact still followed, and my car's front wing ended up with a big chunk of the top-left bit broken off. I did the rest of the race without that part, which wasn't a huge help.

It wasn't easy, and I can't say we were producing particularly strong pace. But thanks to having the correct strategy and me being in the right places at the right times, I was passing one car after another.

It all culminated in a last-lap move for second as I was exactly where I needed to be to pull off a pass on Marciello, clearing him by 0.11s.

Race two was initially a bit more normal for me, but I ran into one big problem on the second restart, when I had already been second, behind my teammate.

He kept semi-accelerating and semi-braking on approach to the safety car line and I ended up touching his car as many as three times.

The third time was the problem, the tip of my nosecone was broken off, leaving a big hole. That didn't do good things for the air resistance, and it would cost me around 5-7 km/h on each straight for the rest of the race.

That, combined with opening-lap contact with Marciello - which again damaged the top-left part of my wrong wing - was hampering my pace significantly.

I was also passed by the Prema drivers during the restart mayhem. Them getting ahead was perhaps not entirely in accordance with the rules – they overtook me before the safety car line, something they aren't allowed to do. But there's no point in arguing that now.

After all that, with the damage inflicted on my car, I think the fact that I was more or less matching the pace of those around me was quite reassuring.

Honestly, fighting for first or second would've been a fool's errand, because the car felt like I had driven it back from a war or something.

I think the long straight was what caused the chaos on the restarts. For the leading driver, there's never a point, an incentive to floor it out of Turn 16, because they'll easily get overtaken by one or even two cars with the slipstream.

Naturally then, the leader will try to go as late as possible. And I get that, when you're trying to go late, you're dashing left to right, forwards and backwards, and that can sometimes create a mess.

For next time, I think they should either just agree a restart procedure beforehand - so that you don't have the lead driver letting go of the SC and then being left free to decide what he's going to do – or simply ban overtaking into Turn 1 on the restart, only allowing it from Turn 2.

Because, what we saw in these races under these rules is that, during a restart, one or two cars will crash each and every time.

I think we did a good job clawing back some points after what happened to us in the past two weekends, although, like I said, I felt better with the car in those first rounds.

But you have to start thinking about points already, and two podiums in a row is a pretty good result. I can't say I'm too satisfied with our run this weekend, but it's the kind of result that, in the end, will help us out in this campaign.

Binder to substitute for banned Matsushita at Spielberg