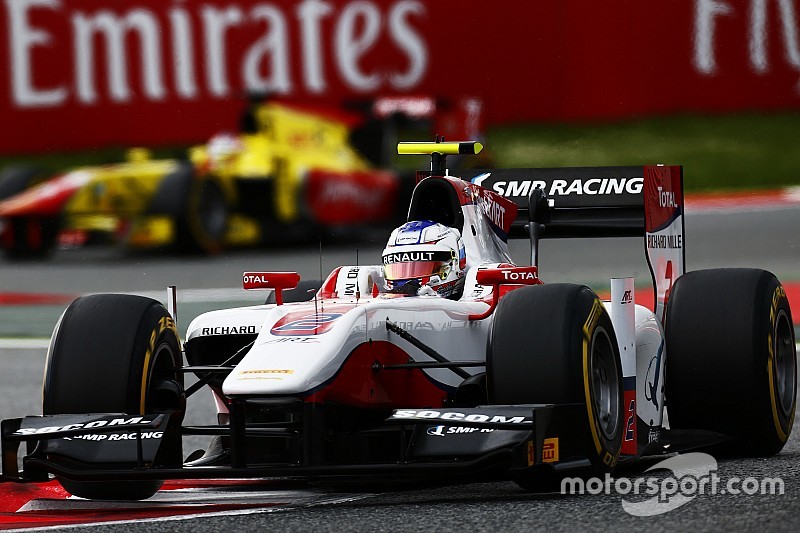 If you followed GP2 this weekend, you know exactly what happened on my debut ART and why I leave Barcelona with no points.

But even despite the mistake, I feel the team and myself showed good pace on our first race weekend together - I could have genuinely challenged for victory in the opening race, could've scored well in the sprint and this column would have been very, very different.

To be honest, the Friday didn't go so well, both practice and qualifying. I can't say we weren't performing well, but we were always a bit unlucky, hitting unexpected traffic and other things like that. In qualifying early on, we were forced onto a different strategy because of the rain, but you can never quite know what the weather is going to be like.

Because of the rain, I didn't do a warm-up lap in my first qualifying lap, just pushed straight away out of the box. At the end of the run, I was P1 – but the rain stopped, the tyres were in no condition to go again and, as everyone else did their flying laps, it was down to P8 for me.

With only P8 on the board, we couldn't risk it. We saw that the rain was going to arrive again and we decided that we needed to start our second run as fast as possible. On my quickest lap, I had a fair few drops of rain, but, of course, as I was done and others closed out the session with their own flying laps – no rain anymore.

We were not as quick as we could be – but looking that everything went against us, P5 wasn't too bad. If we got a good start in Race 1, we'd be there straight away, it's not a huge problem as long you're in the first three rows.

You can call me stupid

And then I spun it while chasing Norman Nato for P2. It was absolutely unacceptable – you can say that I'm stupid and that's probably a good explanation.

In that corner, Turn 2, there are some bumps that you feel every time you pass over them. And, of course, as you hit the bumps, it's important what your car is doing, what balance you have exactly on the car.

I was in the slipstream behind Nato and I felt that my car had a different balance, it was lighter on the rear – and, immediately, as I arrived on the bump, boom. After that, I was just a passenger. But that's no excuse.

In the middle of the track, I was stuck in fifth gear and it would not shift down to fourth. So I stalled it and that was that.

The whole race was really good at that point and my tyres felt in much better conditions than the guys' in front looked. I feel I threw away the win. It was really stupid.

After all, the win was there for the taking. And that's what upsets me most. In that moment, I was trying to line up a move on Nato as I felt I had much more tyres – it looked like he was barely holding on.

If it went to plan, I would be ahead of him and, after the pitstop, given that our car worked so well in the long run, I don't think it would be a problem to get Pierre Gasly for the lead.

I felt confident in the car. Not everything went perfect but, up to the spin, I felt that I was controlling the race well, 100 percent on it. Perhaps that's what made me do this stupid thing.

I helped clean the car after the race – as a bit of an apology, maybe. I did it quite often in Formula Abarth, though, and I was winning almost every race then. It's just a good thing to do – it's not difficult, I enjoy spending time with my mechanics with the car and it's good for us to be one united team.

We went from 21st on the grid to 11th at the chequered flag on Sunday, but that was far from the maximum. I was saving my tyres until the very end, planning to push in the last five laps, and that's when the safety car arrived for the big crash, ending the race.

Had I started P8, P7, P6, that would be enough to be on the podium at least. We had winning pace but I just threw away the weekend.

Still, there are positives to take away. We had a troubled Friday, but everything was really, really good on the two points-paying days.

So, what happened in Race 1, that was absolutely unacceptable. If you heard the team radio call, you know that I was in shock – I just couldn't believe it.