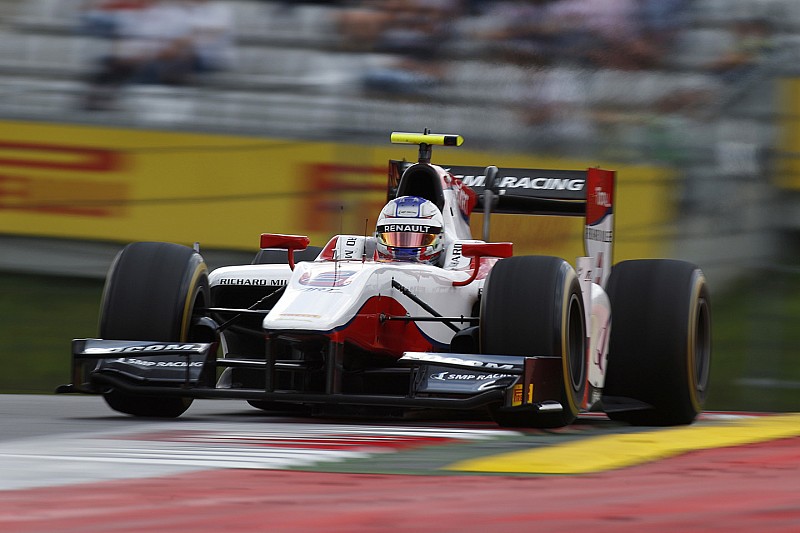 Motorsport.com columnist Sergey Sirotkin looks back at the downward spiral of his Red Bull Ring weekend, in which he scored more points in qualifying than in the two races.

The fourth round of the GP2 season at the Red Bull Ring is now in the history books and, just like the previous three, it was full of both ups and downs for me and my ART Grand Prix team.

We were very fast over one lap, but, while unusual weather and pitlane chaos certainly cost me a big chunk of points, what is more concerning is that the race pace, when it came down to it, was rather lacking.

On Friday, however, things were pretty positive. We didn't show our true pace in practice, having only gotten one quick lap because of the usual reasons – traffic, yellow flags and all that.

But we quickly proved that we were quick, taking pole in qualifying, if only by 0.006s. And that was pretty much the end of the good part of this particular weekend.

On Saturday, the start was not that great – I think it was perfectly average, but the Prema drivers behind me got quite an amazing start and they were ahead. And I just didn't have the pace to stay with them, they pulled quite a bit gap on me immediately.

Obviously, I was trying to save the tyres for the end of the race, because it looked like it was going to be very difficult. We expected the rubber to be completely destroyed by the end of the stint but, with the rain arriving, it never came to that.

In the dry, I was rather comfortable in P3, but the weather changed – and it was a mess everywhere.

The conditions were changing all the time – sometimes you'd be arriving in a corner that was wet a lap before and you'd be shocked by the sudden grip you had. Because the track was so hot that, once the rain stopped, it all dried up in no time and the grip levels increased.

Other times, you'd come in expecting a dry corner and, suddenly, lots of water. It was not easy to manage.

And the resulting safety cars – and, finally, a red flag - did not play into our hands. Some drivers changed tyres during the red flag and gained an advantage like that – and it was just very messy in the pitlane when the restart was given.

I had to properly overtake there on the fast lane, passing between the wall and the car because some drivers were just flat out, just barely avoiding hitting mechanics.

All that put me five places back on where I should have been restarting. I asked if I could get those back on track, and was told that I could.

I passed four of the five cars immediately, getting on the back of Oliver Rowland, who was not letting me go past. I checked if I was allowed to overtake him and got a 'yes'.

So I was back in what should have been my position, P7. But as it turned out, I was not permitted to do that.

In fact, not only that, but by the rulebook, I was supposed to go to the back of the grid. Having lost places in the pitlane, I could not get them all back immediately – and if you're out of position under safety car, you have to duck into the pits, allow all cars through and rejoin at the back. So, in effect, even if I had kept my position coming out of the pitlane, I would still have gotten a penalty.

In the end, that's really unfair. I tried to be nice and careful with other drivers and overtake cars on the fast lane in the pits, as you're supposed to do, but that wasn't enough.

On Sunday, there was more rain and it was messy again, which, starting P12, we welcomed. But we didn't really have pace.

All the positions I gained on track to finish P6 were, really, just being in the right place at the right time – and I was lucky that some drivers who looked quicker behind me kept making mistakes on almost every lap.

I was not P6 in terms of pace and I was really quite upset with that – it wasn't difficult to overtake and if I had winning pace, even a victory would not have been impossible.

After all, Alex Lynn was pretty far behind me after the first restart, but he caught up, overtook me and disappeared into the distance to score a podium. And I couldn't do anything with Antonio Giovinazzi on the last lap either.

We are investigating what went wrong there. Barcelona and Monaco, yes, did not bring us a lot of points, but at least there was little doubt we had the quickest car there. Now we don't. Even in Baku, we weren't at all quickest, but we know that it was because of the huge amount of damage tothe car.

In Red Bull Ring we were still fast over a single lap: the pole confirms that. But we are looking into the long runs. We saw on Saturday that what I felt in the car and what the car was doing was not matching the tyre data.

Last year, good race runs were one of my strong suits. The whole campaign was all about starting from the midfield and gaining positions, overtaking, saving the tyres nicely.

Now it's the opposite – we have amazing qualifying pace and yet we're losing a bit in the race pace. And it's strange because that wasn't the case in winter testing or in Barcelona.

To be honest, it's been a very strange championship, ups and downs for everyone everywhere. I won at Silverstone last year, but I have no idea how it'll go this time. I am pretty sure we'll be quick, but after what we've faced in the beginning of the season, I have no predictions to make.

I don't see anything we are doing wrong, but something is just not going right yet from external circumstances and race events out of our control. But I think we should at least be fast enough at Silverstone.

Since the next round is less than a week away, I'll spend at couple of days with Renault to again go over my programme for the post-British Grand Prix test – and then I'll head straight to Silverstone, a track that I really do enjoy and that I should do well at.