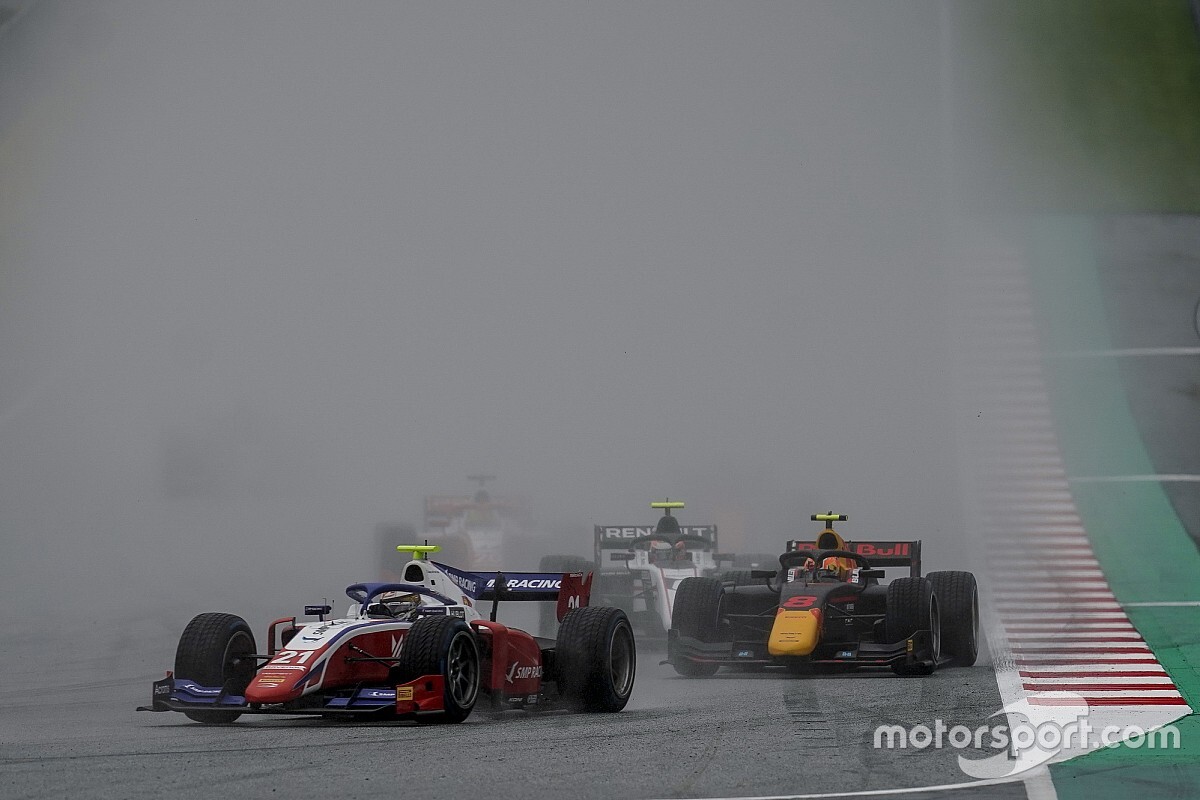 Ferrari junior Shwartzman repelled late-race pressure from long-time race leader and polesitter Yuki Tsunoda to claim his first F2 victory in only his third race in the series.

Red Bull Honda protege Tsunoda led for the majority of the race until he encountered team radio issues and was unable to receive the instruction from his Carlin team to make his mandatory pitstop.

Tsunoda eventually made his pitstop after acknowledging Carlin’s pit board but a slow pitstop meant he emerged behind Renault junior Guanyu Zhou, Prema’s Shwartzman and championship leader Callum Ilott.

Shwartzman had made steady progress from sixth place on the grid but following his pitstop, he rapidly caught Zhou, who was denied a maiden F2 victory in last weekend’s feature race due to a technical issue.

Shwartzman passed Zhou on the exit of Turn 4 to claim the race lead as Tsunoda rejoined the circuit and quickly dispatched Zhou’s Virtuosi teammate Ilott to move into third place.

Tsunoda, who picked up his first FIA F3 victory in mixed conditions at Monza last year, made it up into second place and set about catching race leader Shwartzman after overtaking Zhou into Turn 1.

The battle for the race lead came down to less than a second, but Shwartzman was able to maintain a small buffer to Tsunoda and hung on until the chequered flag for his maiden F2 victory and Prema’s first feature race win since 2018.

Zhou denied Prema’s Mick Schumacher a podium by a tenth of a second as another Ferrari junior Ilott rounded out the top five positions.

Sixth place went the way of ART Grand Prix’s Christian Lundgaard, who was the star of the first half of the race as he made three overtakes on Jehan Daruvala, Shwartzman and Luca Ghiotto in successive laps.

However, a slow pitstop and an off-track moment on the exit of Turn 6 demoted him to sixth place, ahead of his ART teammate Marcus Armstrong.

Series veteran Artem Markelov failed to make the start of the race, after beaching his HWA Racelab-run car in the gravel trap on the reconnaissance lap to the original grid.

The drivers ran a series of formation laps behind the safety car before returning to the pits for a 45-minute red flag period.

After a further four laps behind the safety car, the race restarted and ran green for the remainder of the 36-lap race.