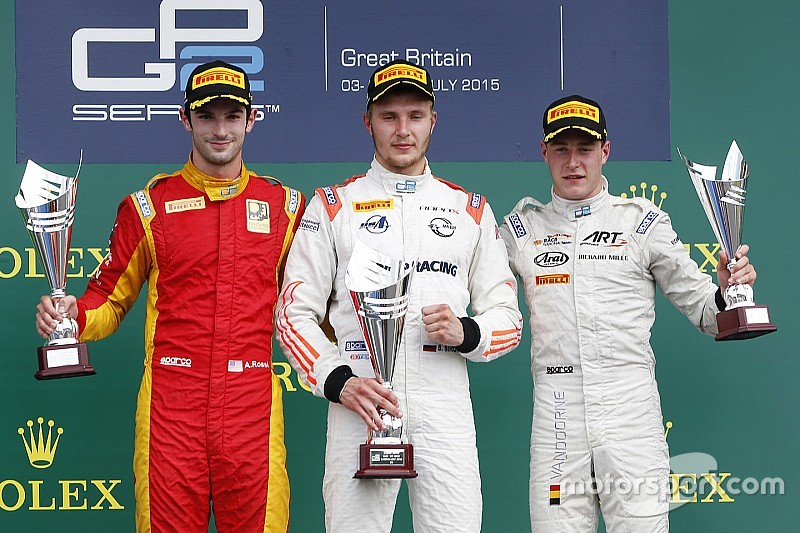 Sirotkin and Vandoorne were in a league of their own in qualifying, yet both were sluggish off the line at the race start, allowing Richie Stanaway to dart between them and into the lead.

With Vandoorne also slipping behind teammate Nobuharu Matsushita and having a run-in with unhappy rival Alexander Rossi, the safety car immediately came out for the wrecked car of Nathanael Berthon, who was spun around and collected by Artem Markelov.

The race restarted at the end of lap three and Sirotkin instantly attempted an audacious move on Stanaway, working his way round the outside of the Kiwi, with Matsushita also taking advantage of the move to pick up second.

However, the Japanese driver soon began to lose time and had to pull to the side of the track, his race undone due to an apparent engine issue.

The race settled down as it approached halfway point. By that time, Sirotkin had established a four-second lead over Stanaway, who was closely followed by Vandoorne and Rossi.

It was then that Stanaway began to visibly struggle for pace, losing several tenths per lap to the race leader and seemingly holding up Vandoorne. This allowed Rossi to pounce, the American finding a way through in the Loop.

And Rossi then wasted little time passing Stanaway, working his way around the outside of the Kiwi at Brooklands. Vandoorne pulled off the exact same move next time by, after which both him and Stanaway opted to take their mandatory stop.

Rossi decided to cover for the Belgian's strategy with a stop the lap after, while Sirotkin, enjoying a whopping nine-second lead, went around the track one more time before his tyre change.

A scrappy out-lap, however, meant that the Russian was only five seconds up the road from Rossi after the stops cycled through.

But five seconds proved more than sufficient from Sirotkin, who eased to the finish line to claim his first win in the series.

Early-stop strategies placed rookies Jordan King and Nick Yelloly ahead of Vandoorne for third place when the latter rejoined. On fresher tyres, the Belgian made quick work of Yelloly and then passed King into Copse with six laps to go, settling into third.

King, meanwhile, had to continue defending, with late-stopping DAMS duo of Pierre Gasly and Alex Lynn coming up quick. After several laps of frustration, Red Bull junior Gasly finally wound a way past into Brooklands, with Lynn then demoting King through Luffield.

With the DAMS duo completing the top five, King was tapped into a spin by Arthur Pic in the final corner of the last lap.

Formula Renault 3.5 points leader Oliver Rowland was ninth on his GP2 debut, beating Rio Haryanto to the line. The Briton could move up to reverse-grid pole should Pic be penalised after the race.

Of the remaining retirements, Stanaway saw his bid for a good finish end with a suspension failure in the second stint, while his compatriot and pre-season favorite Mitch Evans was out of contention early on when his headrest flew out of the car.