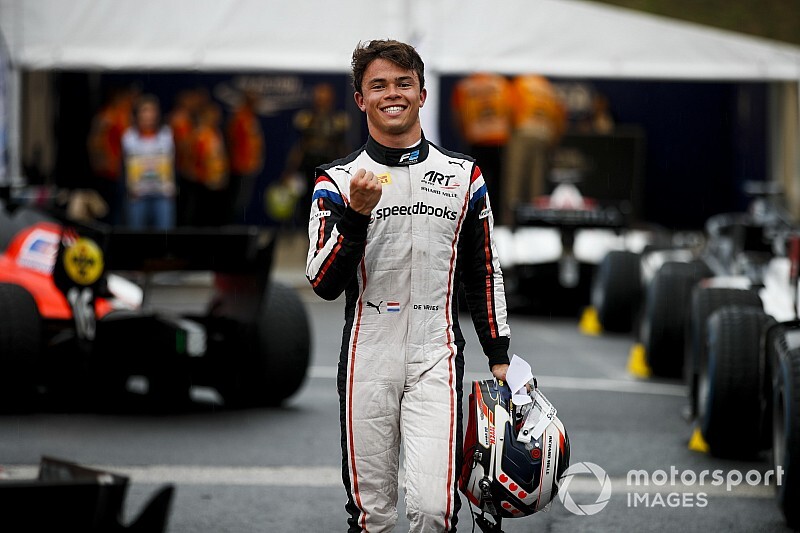 Nyck de Vries took pole position at Spa and extended his Formula 2 championship lead, after a late red flag thwarted a number of his rivals, including Nicholas Latifi.

Dutch driver de Vries was tipped to dominate after scoring a hat-trick of pole, fastest lap and victory last year at a weekend he calls his home race due to the proximity to Holland.

The ART Grand Prix driver was fastest in the first sector of the first group of flying runs, but just as most of the field worked through the second sector, Ferrari junior Callum Ilott ground to a halt with a throttle problem and brought out a red flag. It ended a six-round run of qualifying in the top 10 for the Sauber Junior Team driver.

After the track improved and teams were able to make mid-session changes, De Vries delivered a lap a second quicker than his prior benchmark at the end of the session - before drama at Pouhon ruined a proper battle for pole.

Juan Manuel Correa, Ralph Boschung and Sean Gelael all went off track on their flying efforts, and the red flag was waved once more with Gelael in the barrier.

DAMS’ Sergio Sette Camara made it through before the red flag to jump up to second, ahead of Jack Aitken and Nobuharu Matsushita – who appeared quick enough for pole but locked up at the penultimate corner – with Matsushita’s Carlin teammate Louis Deletraz rounding out the top five.

Mick Schumacher – winner of the most recent F2 race in Hungary – and de Vries’s ART Grand Prix teammate Nikita Mazepin also made it through and took sixth and seventh ahead of MP Motorsport's Jordan King.

But King was deemed to have not slowed down enough under a yellow flag and a three-place grid penalty was applied, meaning he will start 11th.

The Virtuosi Racing team’s tactic of running further back had worked well as top F2 rookie Guan Yu Zhou was third and less than a tenth behind de Vries after the first flying laps.

But that running position meant they were caught out by the late red flag and Zhou was ninth, one spot ahead of his title-challenging teammate Luca Ghiotto.

Williams Formula 1 junior Latifi said his car was “horrible” on the first run after suffering with understeer, and will start from 11th after being caught out by the red flag. He trails de Vries by 34 points with eight races remaining.

Mahaveer Raghunathan (MP) had qualified 19th and 2.922s off the pace, but falls to 20th and the back of the grid after stewards deemed that he didn't slow down enough for a yellow flag.