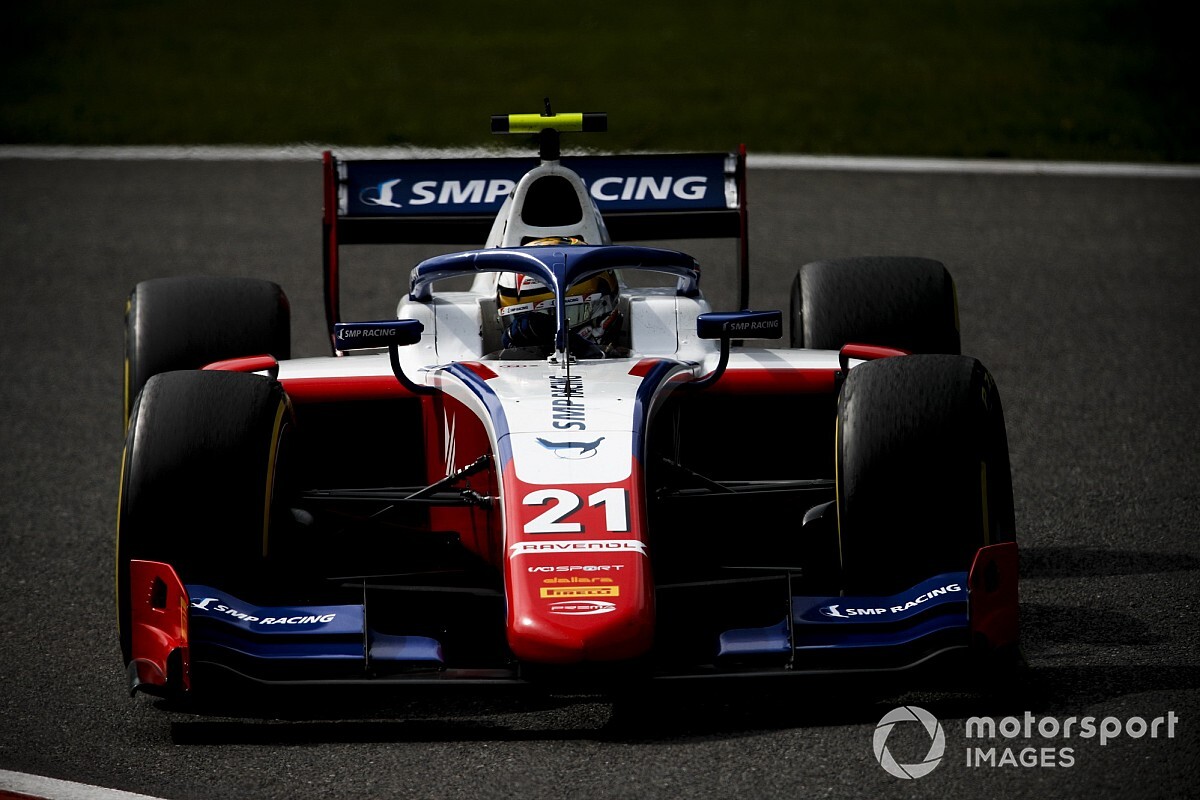 Ferrari Academy driver Robert Shwartzman claimed a dominant win in the sprint race at Spa-Francorchamps to displace Callum Ilott from top of the Formula 2 drivers’ standings.

At the start of the race, DAMS driver Dan Ticktum made a rapid start from third on the grid to pass reverse grid pole sitter Roy Nissany and take the lead into Turn 1.

However, that pass gave Nissany the slipstream all the way up to Les Comes at the end of the Kemmel Straight, and the Williams F1 test driver was able to take advantage of that to swoop around the outside of Ticktum.

There was drama behind as feature race winner Yuki Tsunoda dropped outside the top 10 after running wide at the exit of La Source and, as he tried to reclaim lost positions he pitched the Virtuosi of championship leader Ilott into a spin at Turn 9.

Ilott was forced to park his car immediately afterwards, prompting the first safety car intervention of the race.

When the race resumed, Ticktum got a great run on race leader Nissany as they drove towards Les Combes, with the Trident driver covering off the inside line to force Ticktum to go the long way round.

Ticktum ran over the kerbs on the outside and, as he rejoined the track he clattered onto the back of Nissany, causing terminal damage to the Trident’s car and bringing out the safety car yet again.

As the race resumed on lap 7, Shwartzman led the field from Ticktum, having passed the DAMS driver immediately after his incident with Nissany but before the red flag was deployed.

Shwartzman was able to pull away by 3.3s in one lap alone, as Ticktum began to struggle with damaged tyres.

Behind, Mick Schumacher was on the move in the second Prema, clearing the Hitech cars of Nikita Mazepin and Luca Ghiotto in quick succession, before passing Louis Deletraz and Guanyu Zhou over the next two laps to put himself right behind second-placed Ticktum.

Ticktum was initially able to hold off Schumacher despite reporting heavy degradation on front tyres, but a lock up going into the Bus Stop chicane left him vulnerable - and indeed Schumacher was able to pass the DAMS driver with ease on the Kemmel Straight on the following lap to grab second position.

However, the German driver could do little to do about Shwartzman, who cruised to his third victory of the season, leading a Prema 1-2.

The victory put Shwartzman back in the lead of the championship, 10 points clear of Ilott, who slipped to second in the standings after scoring just a single point across the two races at Spa.

Renault junior Zhou completed the podium spots in third behind Schumacher, with Mazepin, who lost the feature race win after being hit with a five-second penalty for forcing Tsunoda off track, finishing fourth to cap off a strong weekend for the Russian.

Virtuosi’s Ghiotto finished less than a second behind Mazepin in fifth, but ahead of the Charouz of Deletraz and ART’s Christian Lundgaard, who ended a four-race pointless streak in seventh.

Multiple F2 race winner Artem Markelov scored his first points of the year in eighth, ahead of Red Bull/Honda Tsunoda, who dropped to ninth in the final classifications after being hit with a five-second penalty for his collision with Ilott.

Ticktum finished outside the points in 10th after suffering from tyre degradation since his clash with Nissany.

Meanwhile, Red Bull junior Juri Vips staged a remarkable recovery drive to take 11th, having been forced to start the race from the pitlane after his car stalled on the formation lap.

Vips, who replaced the injured Sean Gelael at DAMS this weekend, was also hit by technical issues in qualifying and was forced to start Saturday’s feature race from the back of the grip.