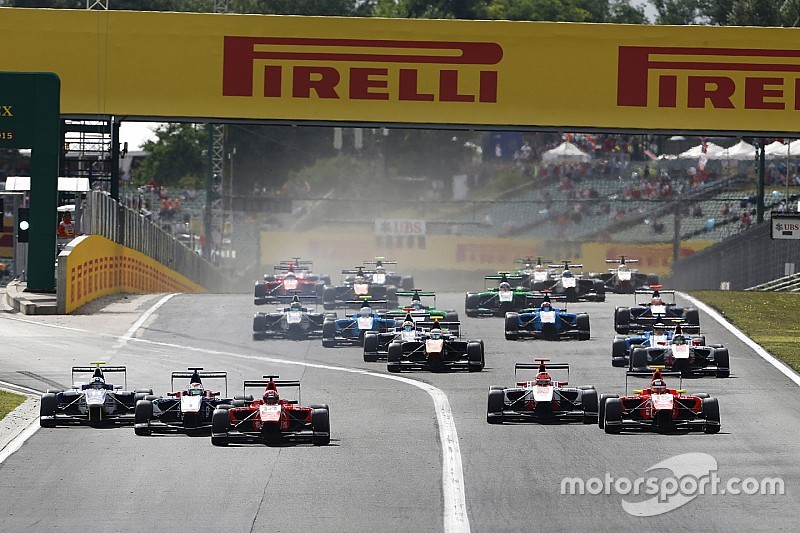 Despite boasting a coveted spot on the Formula 1 support bill and strong drivers, GP3 struggles to get the same recognition as Formula 3. Valentin Khorounzhiy explains why this has been the case.

FIA's efforts to streamline the junior single-seater ladder have led to Formula Renault 3.5 facing an uncertain future, Formula Renault 2.0 struggling to match its phenomenal grids from a few years ago and national F3 series virtually dying out.

GP3, meanwhile, despite seemingly not being part of the grand plan, is still holding strong.

But the series, which was unquestionably more relevant than European F3 during 2010-12, now appears to trail its direct competitor in terms of public attention.

Certainly, that seems to be the case going by traffic - for the last two years, F3 stories attracted a significantly larger amount of readers to outlets this writer has worked with.

On the surface, that seems rather unusual. GP3 has built up a reputation, having helped Esteban Gutierrez, Valtteri Bottas and Daniil Kvyat into F1 and spotlighting the likes of James Calado and Robert Wickens. It's also always been stellar with its PR and media approach - and it races in support of F1.

So, what's at play here? Why is GP3 not reaching F3-levels of buzz? And does it need to?

Any unusual developments regarding the FIA F3 European Championship have, over the past year or so, invited one common, catch-all explanation - Max Verstappen.

In this case, it's obvious the F3 project got a big boost from the Dutchman, even though his rapid graduation to F1 has been met with counter-measures from the FIA.

Verstappen was popular heading out of karting and he became even more popular when he went on a six-race winning streak in his debut year of F3 and got handed a Toro Rosso race seat as a result.

But here's the thing. Ocon and Fuoco are now in GP3, as is likely future Catalan superstar Alex Palou.

There's no straightforward answer in comparing the merits of either field's crop this year. F3's breakaway top four include known quantities Felix Rosenqvist, Jake Dennis and Antonio Giovinazzi, with only Charles Leclerc producing a rookie breakthrough anywhere close to Verstappen's.

But GP3's four frontrunners include Ocon, the ever-underrated Marvin Kirchhofer, on-form Luca Ghiotto and Emil Bernstorff - in terms of excitement, that title fight could give F3's a run for its money.

The answer, perhaps, is instead in depth. GP3 just cannot boast the same numbers of top F4 graduates, who F3 have in spades and who appeal to all sorts of markets - Ferrari's new big thing Lance Stroll, Britain's big hope George Russell, Germany's Maximilian Gunther, France's Dorian Boccolacci and numerous others.

And, from a very different standpoint, F3 also probably benefitted from some terrible driving which, like it or not, has made for very clickable headlines on several occasions this season.

The fact that GP3 supports F1 is a big selling point for the series, but it could also be a cause of some of the issues. After all, GP3's never the main support for F1 - its big sister GP2 is - while F3, whatever championship it runs alongside (usually DTM), is basically always the second most-important item on the ticket.

As such, GP3 tends to get less advantageous timeslots - late Saturday and early Sunday. F3 almost never starts as early as GP3's sprint race and it almost never finishes as late as GP3's feature.

Entertainment's another question mark. Just as European F3 was re-launched in 2013, GP3 introduced a new, quicker chassis. And, while it's been rightfully praised for the fact it sounds better than the previous spec, the racing hasn't been as good.

But then again, F3 has never exactly enjoyed a reputation for non-stop action and constant overtakes. In fact, both championships have probably produced a similar proportional number of classic races.

Part of an ever-changing system

Viewcounts and unique visitors will probably not be the main factors in whether GP3 is allowed to stick around as a direct competitor to FIA's F3 project, as that's not nearly as important as the series' ability to get a grid together and prove demand - something GP3 has been quite excellent at.

But those parameters are not meaningless as drivers' sponsors will probably be more keen on investing if they're guaranteed exposure.

GP3's certainly not doing anything wrong, but the climate has changed and it would make sense to look for ways to get on top of F3 once again.

The series can't exactly produce its own Max Verstappen, nor can it detach from F1. But, having come under fire for the quality of its racing in the last couple of years, it can certainly do something about that - either continuing with the higher-deg tyres which have already improved the show in 2015 or figuring out a different way to stimulate wheel-to-wheel combat.

Make the racing as good as it's ever been and its longevity should be ensured regardless of the surrounding turmoil on the single-seater ladder.

Visser returns to GP3 with Trident