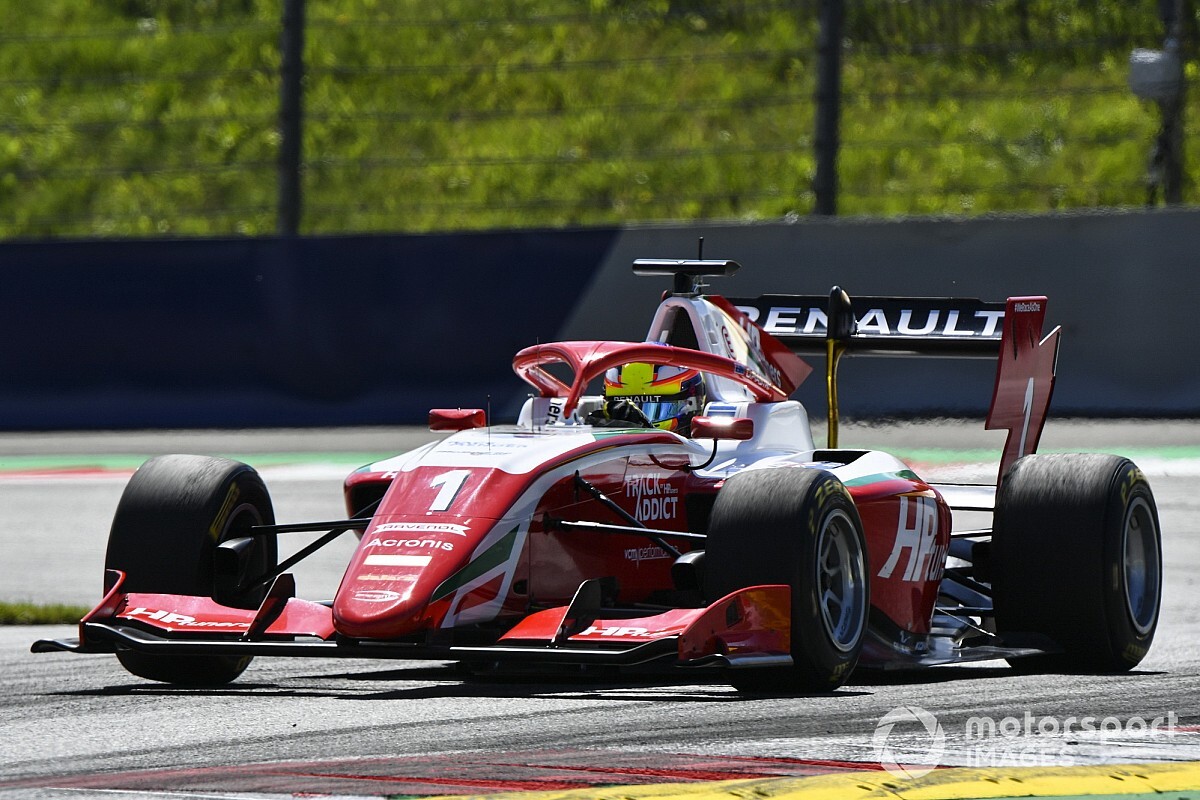 Australian driver Peroni, who was taken on by the Renault F1 junior programme thanks to his 2019 Formula Renault Eurocup title success, was part of a three-abreast battle for the lead going into the first corner.

Poleman Fernandez was slow away, allowing fellow front-row starter Lirim Zendeli up the inside towards Turn 1, and Piastri, from third on the grid, into the middle.

Piastri got pincered between the two and appeared to try to back out, but as Fernandez turned in from the outside there was a collision, which pitched Fernandez off the track, and the ART Grand Prix driver retired to the pits with damage to his right-rear.

Piastri barely lost momentum, and was able to slipstream Zendeli up the hill to the Turn 3 hairpin, passing the German around the outside for the lead.

Sargeant managed to pass Zendeli around the outside of the tight Turn 4 right-hander on the fifth lap, but got two wheels on the grass and conceded the position once again.

One lap later he tried again at the same place and, with Zendeli appearing relatively uncomfortable on the brakes, Peroni was also able to get past too.

At that point, Sargeant was 3.2 seconds behind Prema teammate Piastri, and the gap grew over the next couple of laps, but then the American began to chip away at the margin.

Once the shadowing Peroni became less of a threat, Sargeant began to reel in Piastri. The gap dipped under 2.0s with two laps remaining, and it was 1.6s at the flag.

Peroni set fastest lap in his pursuit of Sargeant on his way to making it two Australians on the podium, while Vesti – who passed Zendeli on lap nine – was also close at hand and completed a Prema 1-2-4.

Last year’s Macau Grand Prix winner Richard Verschoor challenged Vesti on the opening lap, but put two wheels of his MP Motorsport car in the gravel at Turn 4 and dropped back behind David Beckmann and Liam Lawson.

Beckmann and Verschoor spent most of the race in seventh and eighth, with just a small margin to Alexander Smolyar (ART), reigning BRDC Formula 3 champion Clement Novalak (Carlin) and Bent Viscaal (MP Motorsport).

The order didn’t change, meaning Novalak claimed the final point and pole for Sunday’s reversed-grid race, with new rules meaning it is the top 10 reversed rather than the eight of before.

Jake Hughes, fifth on the grid, pitted at the end of the formation lap for attention to the left-rear of his HWA car, joined the race late and finished 28th.

New Red Bull Junior Igor Fraga (Charouz), who started from the back following qualifying problems, made commendable progress to 16th from the 30-car field.