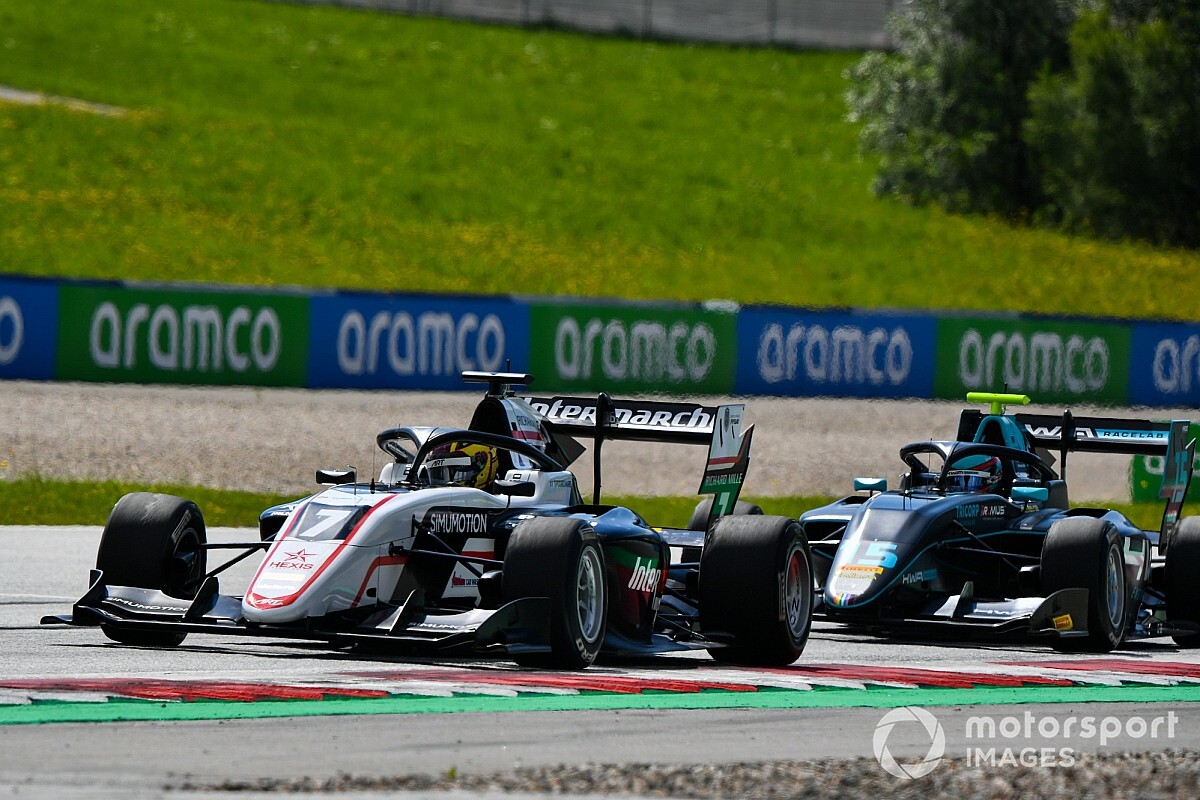 A brilliant battle between Hughes and Lawson looked set for a final-lap shootout to decide the win but the pair then tagged in a clumsy Turn 4 collision, forcing them both to retire.

Pourchaire claimed the early advantage after he blitzed his start from second on the grid to hold the inside line and pass polesitter Hughes on the run to Turn 1.

Despite HWA pilot Hughes trying to retaliate around the outside for much of the opening lap, 16-year-old Pourchaire retained a cautious lead but could never break the tow.

With DRS activated on lap three, Hughes and MP Motorsport driver Lawson ducked into the slipstream on the run to Turn 4 and both managed to pass Pourchaire in the braking zone.

Lawson then held the inside line into the corner, promoting him into first place thanks to an excellent double overtake with Hughes emerging in second.

From there on Turn 4 proved to be the flashpoint, as Hughes retaliated a lap later with DRS to pass and hold a 0.5-second margin at the end of the lap as the top four cars ran clear.

After a couple of aborted attempts on Hughes, Lawson finally made his move at the same corner on lap 11 down the inside in his bid to become the first repeat winner of 2020.

The Hitech driver was then given a period of respite behind the safety car, called when Sophia Floersch spun across the front of Alexander Smolyar and smeared her Campos Racing machine down the barrier.

Although Lawson complained the neutralised pace was too slow, he aced the restart to keep Hughes at bay in the first two laps that passed without DRS assistance.

But as DRS came back into play, Hughes made a quick challenge for the lead into Turn 3 although he locked up at the apex as he passed, which gave Lawson a superior run to Turn 4 to reclaim the lead.

In what appeared to be a two-horse battle for the eventual spoils, Hughes again used DRS to attempt a pass around the outside of Turn 4.

As Lawson hugged the inside to keep hold of position, he tagged the kerb, which unsettled the car and he slid into the side of Hughes, forcing the Briton out onto the gravel.

Both suffered terminal suspension damage and retired before the next corner, which promoted Pourchaire into an unlikely lead.

As proceedings finished behind the safety car, he scored his first FIA F3 win over Logan Sargeant for Prema – who started fifth – and Trident's David Beckmann.