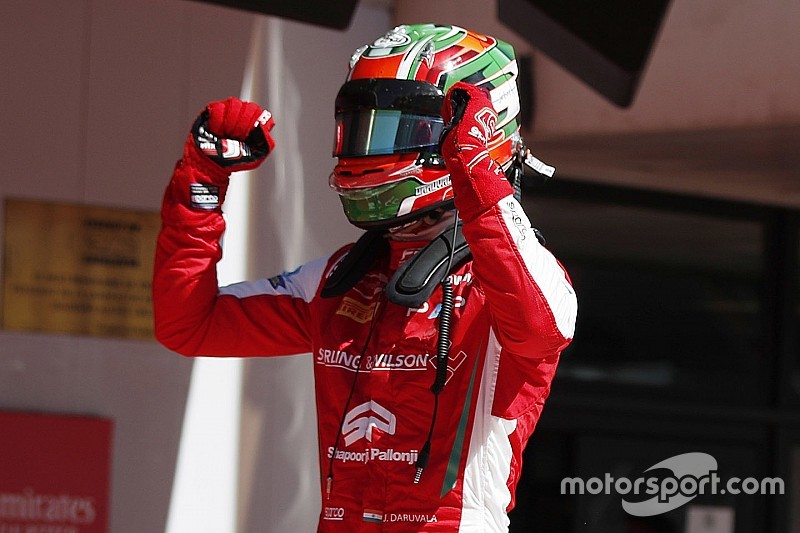 Prema driver Jehan Daruvala was victorious in an incident-filled FIA Formula 3 sprint race in Barcelona, which started with a four-car crash.

Daruvala, second on the grid after finishing seventh in Saturday's feature race, had a better launch than polesitter Niko Kari and took the lead off the line.

The safety car then came out because of a four-car collision at Turn 1 involving Jake Hughes, Artem Petrov, Raoul Hyman and Ye Yifei.

After a lengthy recovery period, the field had a drama-free restart as Daruvala quickly built a two-second lead over Trident driver Kari.

But the safety car was out again when Alex Peroni ran wide at Turn 1 and, after quickly rejoining the track, moved back to the left to pass the bollard on the correct side.

However, Peroni ended up sending Simo Laaksonen in the wall as a result, for which the Australian received a stop-and-go penalty.

Daruvala made a strong second restart and quickly pulled away from Kari and, with no more safety car periods, the Indian scored his maiden victory in the newly-formed series by 2.1s.

Kari was initially also safe from ART driver Max Fewtrell, but the Briton lost positions during the race with Prema's Marcus Armstrong and then Hitech's Juri Vips occupying third.

Vips then closed the gap on Kari and stole second on the penultimate lap.

Kari also came under pressure from Robert Shwartzman but held on to take the final spot on the podium with the Russian still completing a strong recovery from eighth to fourth.

Leonardo Pulcini (Hitech) had a disastrous race, receiving two penalties for unsafely rejoining the track and then forcing Devlin DeFrancesco off the track.

Fabio Scherer retired after a spin at Turn 1, caused by an incident with Keyvan Andres Soori.

F3 teams could ask for qualifying to be split into groups