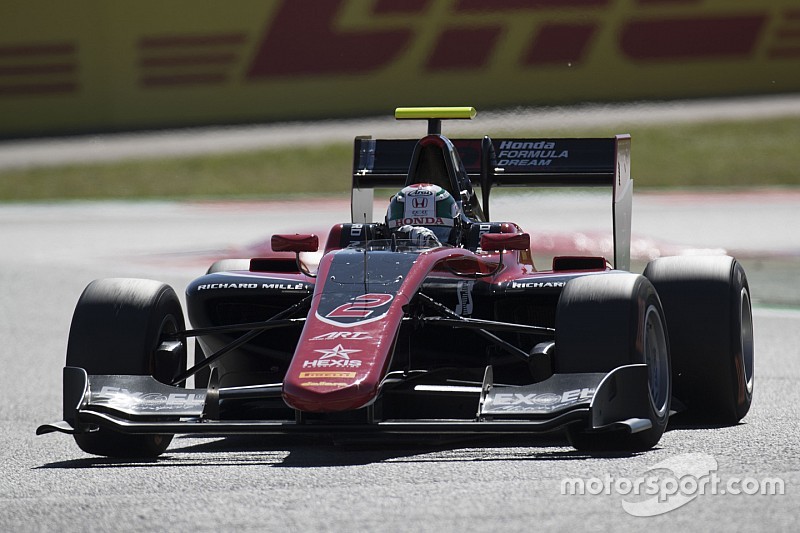 Fukuzumi made a better start than pole-sitter Aitken and grabbed the lead off the line on the long run down to the first corner at Barcelona.

Aitken attempted to come back at Fukuzumi but slid wide at Turn 1 and edged Dorian Boccolacci off the track on the exit of the Turn 2. The incident dropped the Trident driver to fourth place behind Leonardo Pulcini and was noted by the stewards, who decided to take no further action.

Fukuzumi and Aitken traded fastest laps early on as they broke clear of Pulcini, while George Russell – who had dropped from fourth on the grid to eighth with a poor getaway – used his first DRS to pass Marcos Siebert for seventh place on lap eight of the 22-lap race.

GP3 has introduced the F1-style overtaking aid for 2017, with the drivers allowed to use it six times in the feature race and four times in the sprint event.

As Russell and Alessio Lorandi opted to use their DRS allocation to make up positions early in the race, Aitken waited until lap 15 to open his rear wing slot for the first time.

That allowed him to close in on Fukuzumi down Barcelona’s main straight, but the Japanese driver was able to maintain his advantage.

Aitken tried the DRS tactic again the following lap but just as he looked to be closing on his teammate, the British driver suddenly lost drive and was forced to crawl back to the pits to retire.

That left Fukuzumi comfortably clear at the front of the pack and he went on to win by 7.4s over Pulcini, who resisted late-race pressure from the charging Lorandi to hang on to second.

Russell, who had used to DRS to defend against a mid-race attack from Haas F1 junior driver Arjun Maini, came home fourth after passing Boccolacci when the French driver ran wide at the final corner with three laps remaining.

Anthoine Hubert also got by Boccolacci in the closing stages and they came home fifth and sixth, with Maini just behind in seventh.

Raoul Hyman came out on top of a last-lap scrap with his Campos teammate Siebert to claim eighth and pole for tomorrow’s reverse grid sprint race, and Santino Ferrucci demoted the Italian Formula 4 champion to 10th on the run to the line.