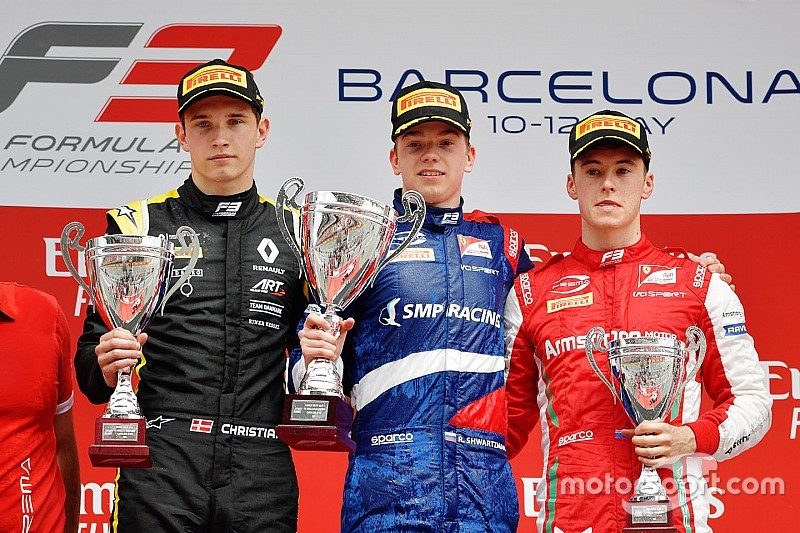 From second on the grid, ART driver Lundgaard made a textbook getaway to pass polesitter Shwartzman at the first corner, and from there the Dane never looked like losing the lead.

Lundgaard concluded the second lap with a 1.5s advantage over Prema driver Shwartzman, and by the 10th lap of 22 he had edged two seconds clear.

His advantage peaked at nearly three seconds before a late virtual safety car period caused by Campos driver Alessio Deledda spinning into the gravel at Turn 13, after which Lundgaard eased away to the tune of 2.5s over Shwartzman at the finish.

But after the chequered flag, Lundgaard - along with Alex Peroni and Teppei Natori - was handed a five-second time penalty for a VSC infringement, dropping him to second.

Marcus Armstrong took the final podium spot, but the Kiwi almost managed to pass Prema teammate Shwartzman at the start, only to be firmly rebuffed by the Russian at Turn 3.

David Beckmann made a superb launch from seventh on the grid to move up to fourth, where he stayed for the remainder of the race, followed by ART stablemate Max Fewtrell.

The third Prema car of Jehan Daruvala made a poor start from fourth on the grid, dropping to seventh on the first lap. The Indian was able to recover one place at the expense of Carlin's Logan Sargeant, before dropping behind Hitech GP's Juri Vips, ending up seventh.

American youngster Sargeant ended up dropping out of the points, finishing down in 15th.

HWA's top finisher was Bent Viscaal in 12th, while teammate Jake Hughes recovered from 29th on the grid to finish 17th after a brief off-track moment with Renault junior Ye Yifei.