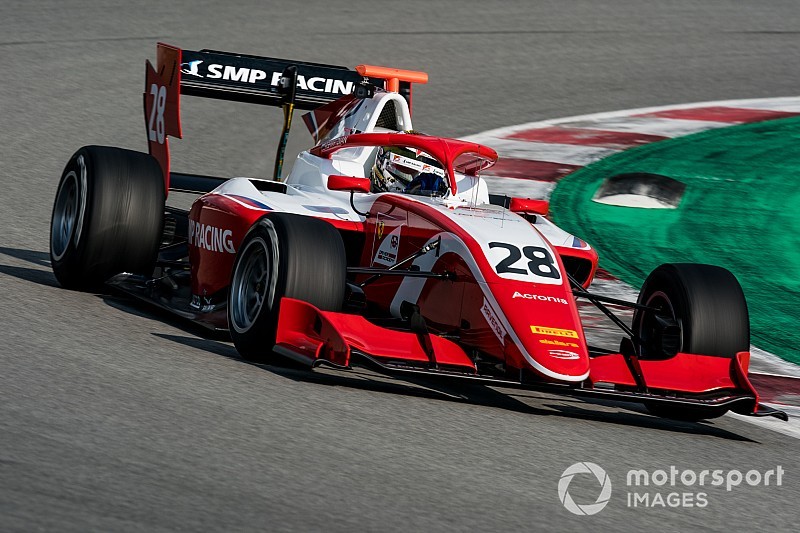 Reigning European F3 champion team Prema elected to run all three of its cars in the mid-session gap in a bid to avoid traffic, with SMP Racing-backed driver Shwartzman delivering a lap four tenths clear of the opposition.

But Formula Renault Eurocup runner-up Christian Lundgaard snatched provisional pole away from the Russian with a few minutes left on the clock.

Lundgaard looked to have given dominant GP3 team ART Grand Prix the inaugural pole for F3's new era, but Shwartzman started his final lap just before the chequered flag flew and managed a 1m31.975s, 0.108s up on the Dane.

Marcus Armstrong and Jehan Daruvala – also of Prema – headed out late, and rose up the order to take third and fourth places, 0.452s and 0.554s off pole respectively.

Behind Daruvala, Logan Sargeant steered the best of the Carlin cars to a top five, ahead of MP Motorsport’s Simo Laaksonen and ART’s David Beckmann.

Reigning Eurocup champion Max Fewtrell was eighth in the third of the ART machines, ahead of late improvers Alex Peroni (MP Motorsport) and Yuki Tsunoda (Jenzer).

Hitech GP had a tough session, with Red Bull-backed Juri Vips its highest finisher in 11th, while Leonardo Pulcini struggled to 18th place after a late start to his session.

HWA's highest-placed driver was Euroformula Open runner-up Bent Viscaal in 16th. Jake Hughes was 2.1 seconds off the pace in 29th, but reportedly without a working DRS on his car.