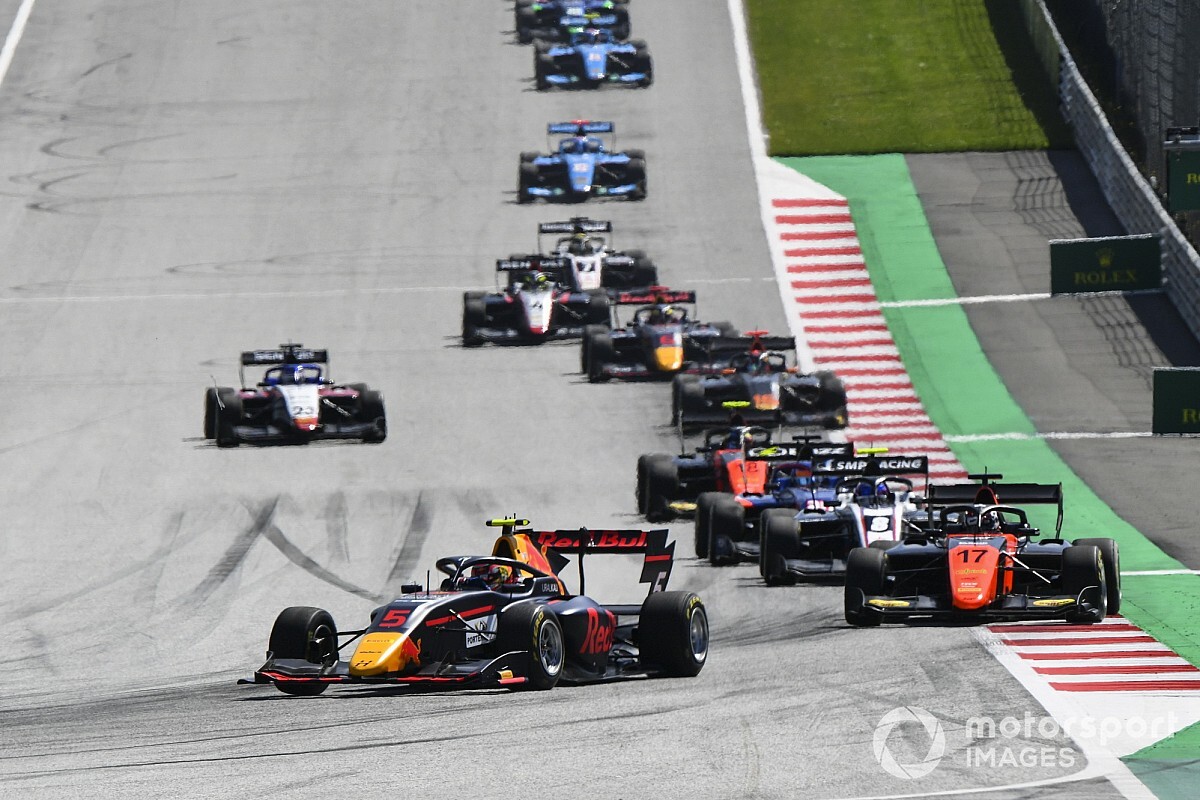 Red Bull Junior Liam Lawson put in an exquisite performance from fifth at the start to take victory in the reversed-grid FIA Formula 3 Championship race at the Red Bull Ring.

The New Zealander got up to fourth at the start, as front-row man Alexander Smolyar was slow away, and then demoted Richard Verschoor on the straight to Turn 3 to go third.

Lawson therefore ran third in the early stages, with poleman Clement Novalak leading from David Beckmann, and the top nine all together in a jostling DRS train.

Beckmann then got into Novalak’s slipstream on the run to Turn 4 on the fourth lap, and made a superb dive to take the lead from the reigning British F3 champion.

Novalak retaliated on the following lap, but his lunge down the inside of the Turn 3 hairpin was too ambitious and the Carlin driver ran wide, allowing Beckmann’s Trident machine back in front and Lawson’s Hitech GP weapon up to second.

Lawson immediately started probing Beckmann’s defences, and a beautifully judged move under braking on the outside line into Turn 4 put him in front on the seventh lap.

Three laps later, Novalak repeated his earlier Turn 3 effort on Beckmann and this time did a much better job of it, putting himself into second.

Then, at half-distance, there was a virtual safety car period. Alex Peroni, running eighth, suddenly lost power and parked on the grass verge – Theo Pourchaire, running 10th, was caught out by the slowing Australian, hitting the back of the Campos Racing car and forcing him to the pits.

The race restarted with Lawson two seconds in front of Novalak, who now had a gap from Beckmann.

Verschoor, who had been lurking in fourth, now found Beckmann – without DRS – easy prey and inserted his MP Motorsport car into third at Turn 4.

Roman Stanek had run wide at the final turn, smashing through a DRS board and leaving shards of polystyrene all over the track.

It took some time for the marshals to clean it all up, leaving two laps of racing and the unfortunate Lawson – who had enjoyed a 1.5s advantage – now with Verschoor on his tail.

But with no DRS deployment on the final two laps, Verschoor was unable to find an opening, and Lawson was able to hang on to win by 0.4s.

Novalak completed the podium ahead of Trident pair Beckmann and Lirim Zendeli, while Frederik Vesti led the Prema Racing charge in sixth.

Ferrari junior Enzo Fittipaldi made tremendous progress over the two races after qualifying on the back row on Friday, and the HWA Racelab driver was able to pass Max Fewtrell (Hitech) after the late restart to finish ninth.

Logan Sargeant, second on Saturday, was caught up in a ferocious early battle with Peroni, Piastri and Bent Viscaal, and suffered a punctured right-rear tyre on lap two from contact with Viscaal’s front wing.