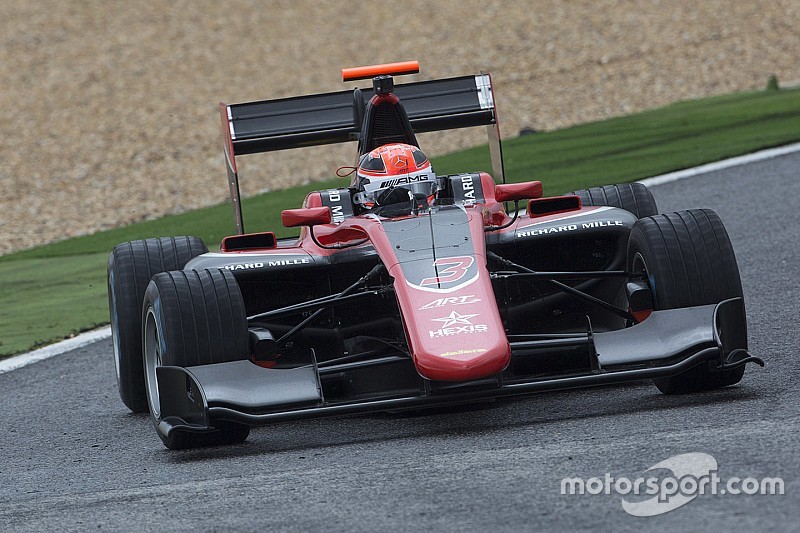 George Russell kicked off his rookie GP3 campaign by setting the pace in the first pre-season test day at Estoril on Wednesday.

Russell, who became affiliated with Mercedes during the off-season, set a time of 1m27.606s in the afternoon session.

The majority of the morning running was hit by rainy, windy weather conditions, and only a single lap was completed on slicks, by Raoul Hyman, who ended up first by over five seconds as a result.

In the afternoon, the field immediately lowered the benchmark set by Hyman - who is testing with Campos but isn't confirmed by the team yet - with ART's Nirei Fukuzumi, Italians Leonardo Pulcini and Alessio Lorandi, as well as Arjun Maini all leading at one point.

In the end, it was Russell taking the lead, narrowly edging out his teammate Fukuzumi.

Hyman completed a strong day in third, less than a tenth behind Russell.

The rest of the field, led by a third ART car of Anthoine Hubert, was a further four tenths down.

Maini, who will kick off his first full-time GP3 season, was fifth, followed by Ferrari junior Giuliano Alesi and Dorian Boccolacci.

The latter and Ryan Tveter, both yet to be confirmed to race in GP3 this year, drove the two free cars of Trident during the day.

Renault's Jack Aitken brought a fourth ART into the top eight ahead of Red Bull and Haas proteges Niko Kari and Santino Ferrucci.