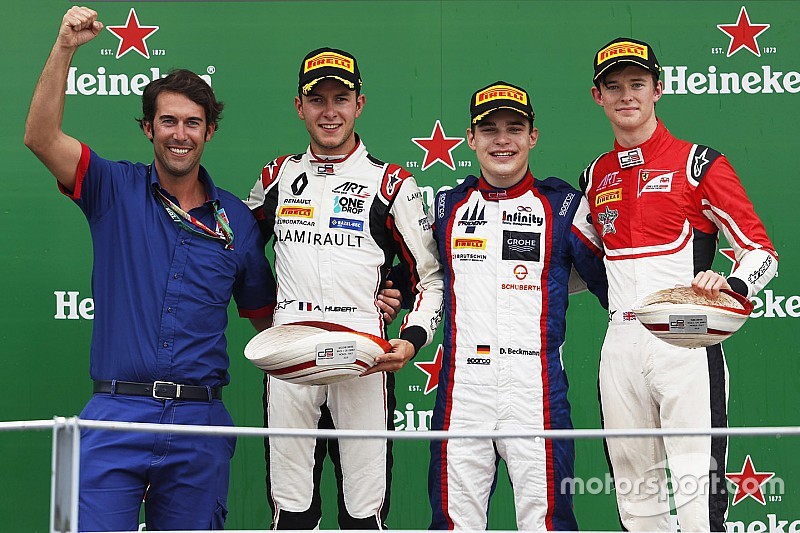 Beckmann converted his pole position into a Turn 1 lead by being the only driver from the first two rows to make the corner, as Leonardo Pulcini, Anthoine Hubert, Juan Manuel Correa, as well as Tatiana Calderon, all cut the chicane.

The Trident driver then quickly pulled away from first Pulcini, and then Hubert when the Frenchman passed the Italian on Lap 3, and Beckmann kept the gap around five seconds to win with ease.

Hubert also spent the race on his own in second and extended his points lead to 29 over ART teammate Callum Ilott.

Pulcini on the other hand had to defend third from Nikita Mazepin and Ilott - the ART duo switching positions when the Russian ran wide at the Roggia chicane - for most of the race.

He finally looked set to secure the final podium position only to starting losing places in dramatic fashion on the penultimate lap with a gearbox problem and drop outside of the top 10.

Ilott inherited third and minimised his losses in the championship by finishing right behind Hubert.

Simo Laaksonen (Campos) successfully edged ahead of Mazepin for fourth on the penultimate lap when the latter ran wide at the opening chicane - his last of numerous off-track excursions.

The Finn secured his best result in GP3 in fourth with Mazepin settling for fifth, followed by Trident duo Giuliano Alesi and Pedro Piquet.

Devlin DeFrancesco hit Diego Menchaca at the end of the main straight, prompting a brief virtual safety car stint, and the Mexican's retirement.

In a disastrous race for Jenzer, Correa spun at the Roggia chicane on the first lap, the American dropping to the rear of the field, before Calderon gradually slipped out of the points and finished a lowly 15th.