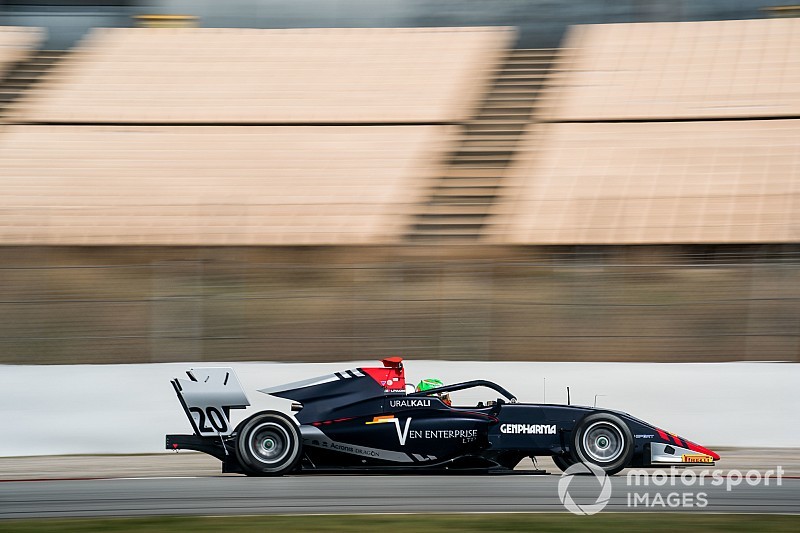 Quickest by two tenths on the opening day, the GP3 race winner fired in the fastest lap of the two-day test on Wednesday morning, recording a 1m32.222s.

Despite numerous red flag interruptions – with problems for Alessio Deledda (Campos), Teppei Natori (Carlin) and Jake Hughes (HWA) among others – laptimes in the morning session were considerably quicker than those recorded on Tuesday.

As many as 13 drivers surpassed Pulcini's existing benchmark, but the 20-year-old Italian's Wednesday gains were enough to leave him 0.147s clear of the pack.

ART-run Renault juniors Christian Lundgaard and Max Fewtrell made up the top three behind him, the former having been quickest in the first pre-season test in Paul Ricard in March.

Campos driver Alex Peroni was fourth despite causing one of the morning session's many red-flag interruptions.

Much like on Tuesday, the weather was inconsistent throughout the day, with intermittent rain a factor.

German Formula 4 champion Lirim Zendeli topped the afternoon session over Trident pair Pedro Piquet and Niko Kari – the latter causing a stoppage in both the morning and the afternoon sessions – but Zendeli's effort was almost a second and a half slower than what Pulcini had managed earlier.

The final pre-season test will take place at the Hungaroring on April 17-18.