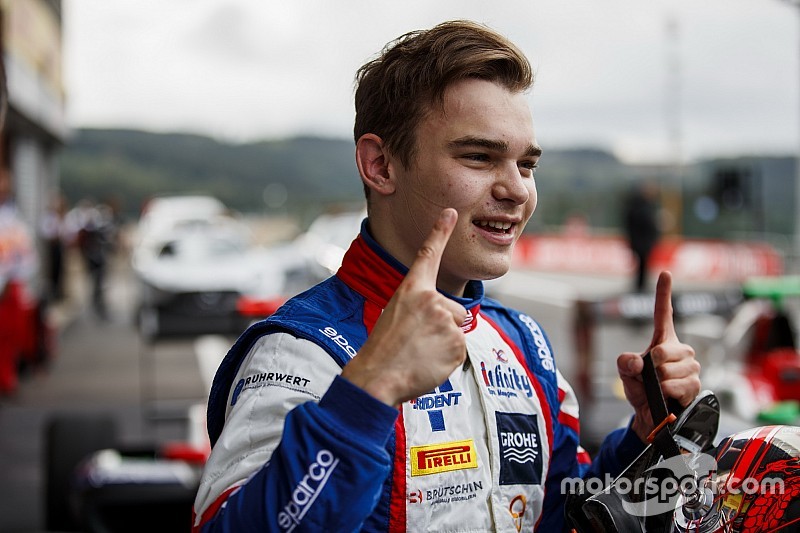 David Beckmann scored a maiden GP3 Series win from pole in a Trident Racing 1-2, as the squad took three of the top four positions at Spa.

Beckmann made a strong getaway, while a brilliant start from Ryan Tveter put him in prime position to challenge his teammate.

Tveter was sixth entering La Source, but as Pedro Piquet – also of Trident – struggled to get the power down and held up all four ART Grand Prix cars behind him, Tveter snuck up the inside and into second place.

He went off the circuit at Les Combes, but held the spot and began to hunt down Beckmann as he'd scurried away in the melee.

Tveter sat on Beckmann’s tail for the early running, with the decisive moment coming on lap eight when Tveter used DRS to close on the leader, but misjudged the braking point at Les Combes and ran wide, giving Beckmann a two-second buffer.

The German held on for victory in just his third race with his new team after joining from Jenzer Motorsport, replacing Formula 2-bound Alessio Lorandi.

Championship leader Anthoine Hubert had an awful start, and did well to consolidate third after the scramble at Turn 1.

He looked unable to match the pace of the two Trident cars at the front in the early running, but didn’t fall back towards the rest of the field either.

Hubert closed Tveter down in the closing stages, and got within 0.6s, but had to settle for third, albeit extending his championship lead, 24 ahead of ART teammate Callum Ilott.

Piquet spent most of the race in fifth behind Jake Hughes, who passed the Brazilian in the early running. But the Brit's tyres went off in the closing stages and he fell from fourth to seventh as Piquet sealed fourth.

Nikita Mazepin – who had been pushed off at La Source at the start – also passed Hughes in the late running to take fifth, ahead of Ilott.

Ilott had attempted to go around the outside of Mazepin at the second part of Les Combes on lap two, but Mazepin ran wide on the damp track and shunted his teammate off. Ilott was lucky to rejoin after contact.

Joey Mawson passed Hughes on the last lap at Les Combes, but went off the track and almost crashed into Giuliano Alesi when returning onto the circuit.

They avoided contact and Mawson secured the sprint race pole in eighth, with Alesi ninth and Tatiana Calderon sealing 10th.

Leonardo Pulcini’s title aspirations took a hit, as the man previously third in the championship could only finish 15th from a 12th-place start. The Campos Racing driver falls behind Mazepin in the points.