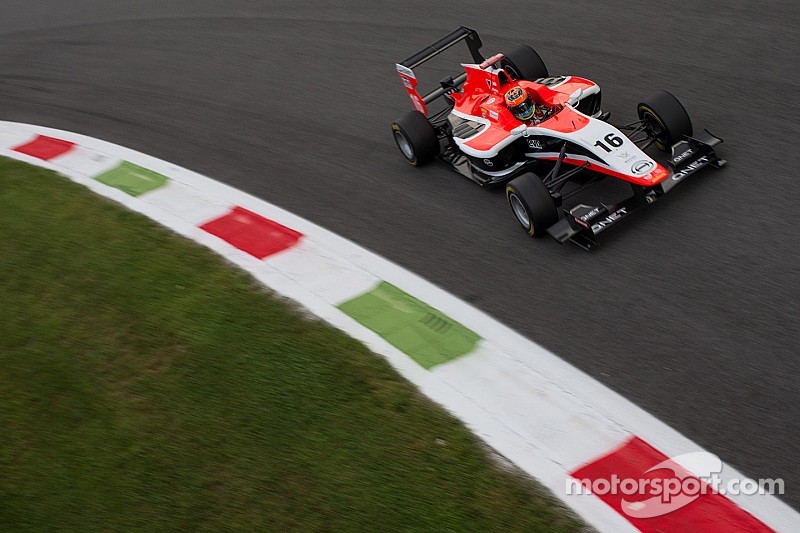 Determination, maturity and a lot of grit is what Marussia Manor Racing’s Dean Stoneman showed on track today in Monza. From fourth on the grid, the Brit made a brilliant start to snatch the lead and came out on top of an epic duel with Series leader Alex Lynn. ART Grand Prix’s Marvin Kirchhöfer joined the pair on the rostrum in third.

Jenzer Motorsport’s Mathéo Tuscher started from reverse pole with Patrick Kujala alongside, but it was Stoneman in red who charged into the lead with Lynn and Emil Bernstorff joining him for company. It was a frenetic first few laps with positions swapping throughout the field with Kirchhöfer up to P4 after passing Tuscher (the Swiss driver losing several places at the start).

All eyes were on the titanic tussle at the front with the Carlin and Red Bull Junior team driver desperate to find a way past Stoneman. On lap three, Lynn got the move done but Stoneman wasn’t going to give up easily and re-passed him later on in the lap. Bernstorff saw his opportunity to pounce and snuck through into P2 passing his teammate but Lynn was having nothing of that and re-claimed second a few corners later.

Kirchhöfer was soon on Bernstorff’s tail and attempted an overtake into Turn 1 but ran over the kerb and lost P4 to Kujala. The Finn spun out moments later after contact with Tuscher brought a premature end to both drivers’ race 2.

At the midway point Stoneman held a half a second lead back to Lynn with Bernstorff and Kirchhofer a few seconds further adrift. The German began to challenge for the rostrum place and put Bernstorff under huge pressure, the Carlin driver ran wide into the dirt and lost his place to the ART Grand Prix star dropping to fourth.

In the latter stages the fight was on for P6 and it was Kevin Ceccon, Luis Sa Silva and Jimmy Eriksson who claimed the final points on offer after both Dino Zamparelli and Alex Fontana made small mistakes.

There was no denying Stoneman after delivering a brilliant win and the Brit crossed the line just 0.908s clear of Lynn. Kirchhöfer recorded his second podium of the Monza weekend and received two extra points for posting the fastest lap. Bernstorff, Yelloly, Ceccon, Sa Silva and Eriksson completed the top eight.

Series leader Lynn has increased his lead in the Drivers’ Standings to 50 points after his nearest title rival Richie Stanaway suffered technical gremlins with four laps to go when lined up to score four points. The Kiwi is on 123 points compared to Lynn’s 173, with Eriksson, Bernstorff and Kirchhöfer rounding out the top five on 115, 111 and 107 respectively.

Carlin heads the Teams’ Standings and extends their advantage – the British squad have 290 points, with Status Grand Prix and ART Grand Prix on 228 and 225 completing the top three.

There is a break in the calendar now but the wait will be worthwhile with GP3 marking its second trip outside of Europe with a brand new venue on the horizon, Sochi in Russia on October 10-12.