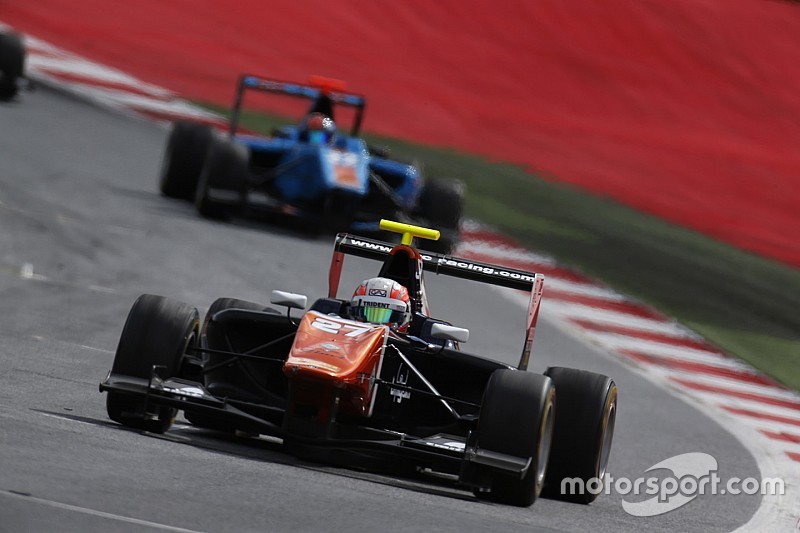 At this weekend, for the first time, Pirelli will use the Super Hard compound tyre.

Following a thrilling weekend in Spielberg, Austria two weeks ago, the GP3 Series heads to Silverstone in Great Britain for the third round of the 2015 season. Let’s rewind to the Red Bull Ring: The Italian squad Trident dominated proceedings. Luca Ghiotto scored his second consecutive pole of the campaign and overtook Esteban Ocon to snatch the lead in race one and drive off into the distance, claiming his maiden win in the category.

His Trident teammate Óscar Tunjo drove a stunning race from P9 on the grid to carve his way through the field, passing Marvin Kirchhöfer for the win with two laps remaining. This was a debut win for the Colombian rookie. Ghiotto now leads the drivers’ standings after two rounds ahead of Kirchhöfer and Ocon. French squad ART Grand Prix top the teams’ standings ahead of Trident and Carlin.

Hot temperatures are expected for Silverstone this weekend with the Super Hard Pirelli compound nominated for the first time. The 5.891 km Silverstone track is one of the fastest on the calendar and the drivers enjoy the challenge of the historic circuit.

“Silverstone is particularly demanding on tyres because of its many fast corners, meaning that there is a lot of energy going through them for sustained periods of time. This places a lot of stress both on the tyre structure and compound. With most of these corners flowing in quick succession, there is no rest for the tyres, which are constantly working hard and heating up to generate mechanical grip. As a result, we needed a compound more similar to our 2014 hard for GP3, as all the 2015 tyres are all a step softer than their predecessors.

The GP3 drivers have a smaller allocation of tyres than GP2 and no pit stops during the races, which is why the superhard is a step we have introduced only for GP3. The weather is expected to be warm at Silverstone this weekend, but we know from the past that conditions can still be unpredictable, so the teams will have to be ready to adapt their strategies if necessary to changing circumstances.”

“Silverstone is certainly one of my favourite tracks. From the outside it’s fairly flat but there are loads of high speed corners to challenge the skills of a driver. One of my favourite parts of the circuit is Maggots and Becketts. I think it’s a really cool section as you can go flat out through Becketts if you take it perfectly. That’s a really good feeling. You can also gain a lot of time from rolling off the brakes and carrying the minimum speed. This doesn’t normally apply to many other circuits. Therefore this track requires a slightly different driving style.

“As it’s an aero-dynamic dependant circuit, overtaking may be difficult depending on how close you are to the car in front of you. Vale and Brooklands are two good opportunities for passing. I think the GP3 races will be very exciting here and I don’t expect the tyres to be much of an issue.”

• Austrian Christopher Höher replaces Samin Gomez this weekend in Silverstone in the #25 Campos Racing car. Höher has driven one round in GP3 last season at the Budapest event.

• This is the first time Pirelli will use the Super Hard compound tyre.

• There have been four different winners from the first four races: Esteban Ocon, Marvin Kirchhöfer, Luca Ghiotto and Óscar Tunjo.

• Luca Ghiotto has pocketed both pole positions so far this season. The Italian has achieved pole from three of the four rounds he’s undertaken so far in his GP3 career.

• In the opening two rounds there have been double victories from a specific team. In Round 1 ART Grand Prix’s Ocon and Kirchhöfer were victorious and in Round 2 Trident’s Ghiotto and Tunjo both recorded wins.

• ART Grand Prix leads the way in the Teams’ Standings on 92 points. In second is Trident on 83 with Carlin on 62 points.