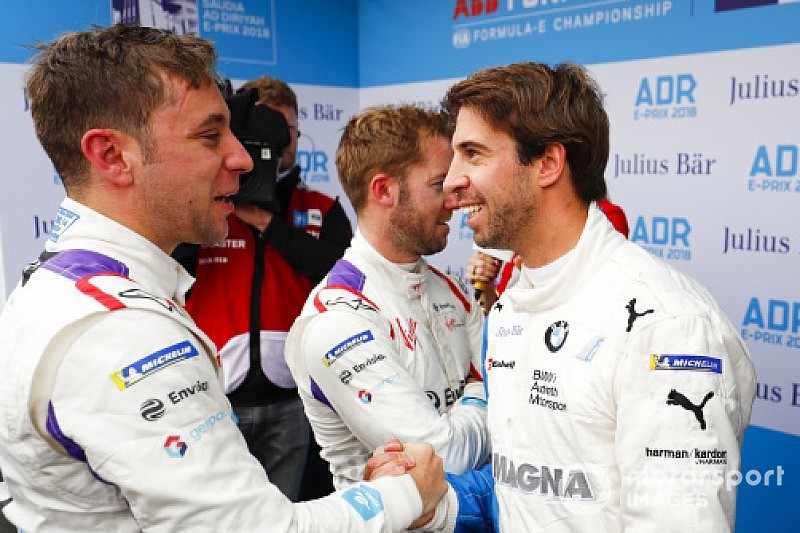 After wet weather cancelled the planned FP1 and FP2 sessions, qualifying took place just a short while after a hastily rescheduled practice run did occur.

Qualifying was organised into two groups instead of the usual four, with NIO’s Tom Dillmann taking to the track early in the first 15-minute session.

The drivers were only permitted to complete one qualifying run as per the regulations – out-lap, a 200kW sighting tour, 250kW flying lap, in-lap – but Dillmann ran solidly for 10 minutes before putting his flying lap in.

He therefore topped the early running with a 1m17.893s, but was immediately placed under investigation for not respecting the qualifying format.

The rest of group one – which included the top five finishers in the 2017/18 championship per the expected qualifying format for the first race of the year – hit the track, led by Dragon’s Jose Maria Lopez, with just under five minutes of the first segment remaining.

Lopez failed to better Dillmann’s effort, but da Costa did, with a 1m17.728s.

Sebastien Buemi wound up fourth, with Jean-Eric Vergne and Lucas di Grassi finishing towards the end of the first 11 runners.

The group B runners took to the track after a 10-minute gap, with a more even split in when they appeared.

Gary Paffett and Oliver Rowland went out after a few minutes, but both had moments on their 250kW laps – with the latter appearing to clip the barrier at the exit of Turn 1 – and did not trouble the front runners.

Just as DS Techeetah driver Andre Lotterer was completing his flying lap, red flags came out after Maximillian Gunther (Dragon) stopped on the flowing left of Turn 7 with what appeared to be a damaged left-front corner of his car.

After a lengthy delay, the drivers – including Lotterer – who had had been on-track before the stoppage, were allowed to re-run their 250kW efforts.

Lotterer ended up as the second-fastest group B runner, 10th overall behind Vandoorne, Bird, Vergne, Robin Frijns and Jerome D’Ambrosio.

While Lotterer was able to get a clean 250kW effort in, several drivers, including Alexander Sims, Felipe Massa and Jaguars Mitch Evans and Nelson Piquet Jr appeared to have theirs disrupted by a late Felix Rosenqvist crash.

In the dying moments of the session, Rosenqvist clipped the outside wall approaching the final corner and went into the barriers at speed at the edge of the turn, nose-first.

With the Mahindra Racing driver stopped at the final right-hander, a red flag was briefly shown by a marshal situated near the incident, but a full stoppage was not called by race control.

The drivers following Rosenqvist therefore crossed the line for the final time in qualifying after passing the accident.

Evans finished 11th, while Sims ended up 17th, with Massa and Piquet bringing up the rear of the field ahead of Gunther and Rosenqvist, both of who did not set a 250kW lap.

Rowland, Turvey, Paffett and Mortara filled positions 13-16, with Audi’s Daniel Abt ending up as the lowest-placed group A runner in P18.