An energetic start to Formula E in Miami 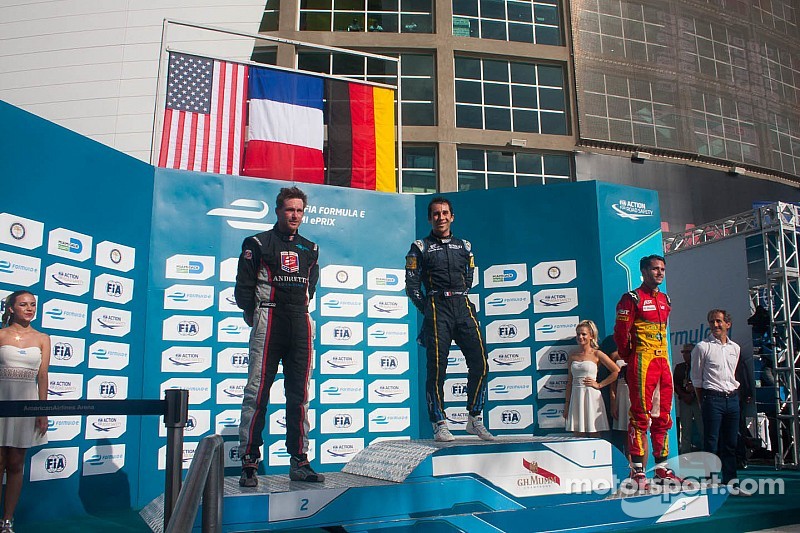 Nicolas Prost (e.dams-Renault) came out on top, finishing ahead of Scott Speed (Andretti) and Daniel Abt (Audi Sport Abt).

Miami, “Gateway to the Americas”, was the venue for the fifth ePrix of the FIA Formula E Championship. In Florida’s largest city, the drivers once again showed off the qualities of the Spark-Renault SRT01_E single-seaters used in the all-electric category. At the end of a race in which energy management was crucial, Nicolas Prost (e.dams-Renault) came out on top, finishing ahead of Scott Speed (Andretti) and Daniel Abt (Audi Sport Abt).

After a two-month break, the American leg of the FIA Formula E Championship world tour resumed in Florida. The fifth round was held in Miami, a city that has made sustainable development one its main commitments.

One of the eight

Technical partner to the championship since its inception and selected as one of the eight manufacturers authorized to work on the drivetrain next season, Renault Sport continued its relentless quest for maximum reliability and safety for the Spark-Renault SRT_01Es. And their work is clearly paying off, as the single-seaters enjoyed unprecedented performance levels in the first ever ePrix to be held without a safety period.

After the single practice session was dominated by Sam Bird (Virgin Racing), Jean-Éric Vergne (Andretti) claimed his second pole position in the series during qualifying. Following a perfect start, the former F1 driver was then caught off guard by Sam Bird, who grabbed the lead midway through the race. The Frenchman pitted to change cars shortly afterwards, whilst the Briton, running low on energy, was forced to concede first place to Nelson Piquet (China Racing) and then Nick Heidfeld (Venturi).

Daniel Abt emerged from the pit stops leading the race. Under pressure from Nicolas Prost, the German was unable to hold off the Frenchman and Scott Speed on the penultimate lap. The son of the four-time F1 World Champion became not only the fifth driver to win in as many rounds, but also the new championship leader. The first team to win two ePrix, e.dams-Renault extended its lead in the teams standings.

As a curtain-raiser to the ePrix, the Western High School proved to be the quickest and most efficient of the Miami high schools in winning the Formula E School Series races, in which ten local schools took part.

The next round of the Formula E will be the last of the American events and will also mark the halfway stage of the season. The sixth ePrix of the season will be held in Long Beach, on 4 April.

Jean-Pascal Dauce, Director of Motorsport, Renault Sport Technologies: “Our American hosts have shown real enthusiasm for Formula E. Once again, the Miami ePrix confirmed the value of the technical solutions chosen carefully by our people as technical partner of the series. The challenge was even greater here as the drivers and teams only had one practice session in which to get up to speed before qualifying. Energy management once again proved to be a complicated exercise, and some paid for not getting it right at the end of the race. Congratulations to Nico Prost and our partners e.dams-Renault for their carefully-crafted race win!”