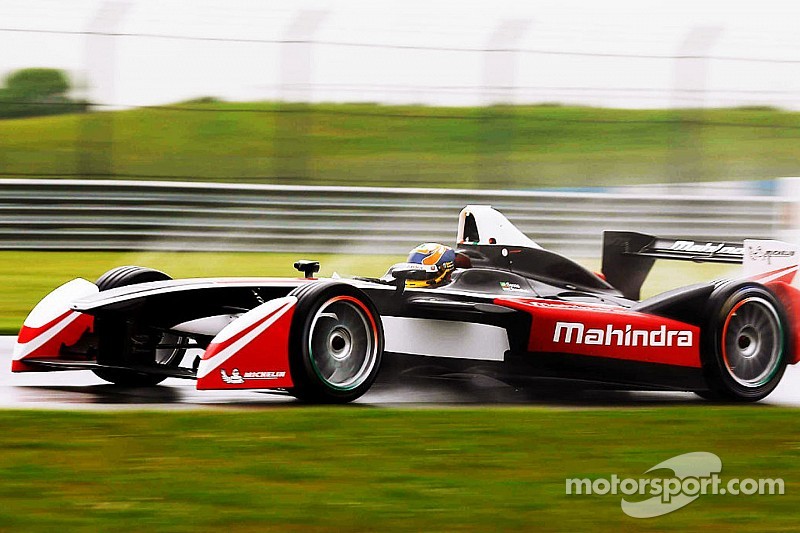 Karun Chandhok will be driving for Mahindra Racing in the newly formed Formula E series.

For many people the words ‘Indian Motor-Racing Star’ probably conjure up about as many images as the words ‘German Baseball Great’ ‘Swiss Military Hero’ or ‘Genuinely World Class English Winger’.

There have only been two Indian racing drivers in the history of Formula One and one of them, Karun Chandhok, is now poised to take the wheel for Mahindra Racing at the highest level of fully electric powered motor-racing when the first ever Formula E season commences in Beijing next month.

“The technology is really interesting,” Karun tells ESM, “It’s very different, very new – all the energy recovery stuff is actually very tricky… it’s not as quick as we would like perhaps but that’s because battery technology is still in quite a nascent stage.  As battery technology improves then the speed will go up.  But it is very impressive that we have a fully electric car capable of doing 230kph… I think you’ll see this change quite rapidly as the technology evolves, batteries will get more and more powerful and batteries will get lighter and lighter.”

Formula E is a culmination of the increasing prevalence of hybrid technology in motorsport during recent years, though Karun does not believe the sport is in danger of becoming fully electric in the near future.

“I don’t think in my lifetime we’ll see the internal combustion engine being replaced completely by electric cars.  I think there’s a place for both of them… I’m a big fan of history and tradition and I think that can’t be ignored completely.  The Formula E stuff is aimed to develop technology to go on the road car… if you look at the road car industry today they are all going electric hybrids.  There’s a lot of interesting stuff going on there.”

Growing up in India Karun initially struggled to break into the sport, partly due to the overwhelming popularity of cricket – ‘a very, very hard thing to compete against’ – and partly due to a general lack of knowledge surrounding the sport which ultimately resulted in a lack of financial support and sponsorship.

“People knew what F1 was and people knew Schumacher and Hakkinen and people like that,” Karun says, “but nobody really understood anything further down the ladder.  So if you said ‘I’m off to go to Formula 3 and I need £350,000’ people just thought you were mad!  They just couldn’t comprehend it.  And also the media didn’t understand it.  At the time there wasn’t really an educated knowledge-base of motorsport media… I did a press conference at a Go-Kart track once and the guy asked what the difference was between a Go-Kart and a Formula One car – I mean where do we even start!”

I think in many ways both Narain (Karthikeyan) and I have had to be ambassadors for the sport, promote the sport and also educate people on the sport

“Today all that’s changed.  There’s a very knowledgeable motorsport media base, there’s a lot of interest in the sport.  It’s still difficult to raise the funding for anybody coming out of India, there’s no question about it, because don’t forget we have a Rupee currency that isn’t as strong compared to the Euro or the Pound or the Dollar… there’s a lot of things we’re up against but at least today I’d say the next generation of drivers have got a bit more opportunity just because the interest level is higher to get media interest and to get sponsorship for what they’re doing.”

Though Karun doesn’t say it in quite so many words there can be little doubt that he is one of the catalysts for this increased knowledge and interest in motorsport in India.

In 2010 Chandhok became only the second Indian driver in history to reach the highest level of the sport, along with Narain Karthikeyan.  Karun’s breakthrough into Formula One, as well as other triumphs such as a GP2 victory at Hockenheim in 2008, was breaking news on TV stations in India and a leading story in the newspapers the next day.

“I think in many ways both Narain and I have had to be ambassadors for the sport, promote the sport and also educate people on the sport.  That’s certainly been quite an important role in what we’ve had to do… it’s a strange thing to be honest, there’s a lot of people who take a great deal of pleasure in seeing their picture in the paper or magazine and things like that and I don’t really. I became a racing driver because I like driving race-cars and that’s what I do.  I’m one of these sad people who on my days off I go to Snetterton to be a driving coach for a Formula 3 team.  Tomorrow I’m going to my local kart track to spend a day karting with a bunch of 15 and 16 year olds.  My passion for the sport is huge and that’s the reason I do it.”

It is a passion which is never more palpable during our conversation than when he talks about his admiration for the other, perhaps less visible, members of his team.

“You do get to spend time with some unbelievably intelligent people.  Honestly the race engineers and the people you work with… I feel very privileged in many ways to be able to sit in an office with these people.  And when you work on solutions and work on ideas and they come up with these things, you think ‘That’s just brilliant – I would never have thought of that!’

Similarly he talks with real enthusiasm when our conversation touches upon the topic of one of his favourite circuits.

“It’s just such a buzz driving around Le Mans.  It’s a very, very special place… The circuit is just amazing.  When you drive a Prototype around there it’s so quick, and managing the traffic and managing the fuel and the tyres and still doing a quick lap time – and then the weather changing all the time!  You know, you get rain on different parts of the track, it’s dry on different parts of the track.  It is such a difficult race to do.  It mentally drains you, not just physically.  But that’s such a big challenge.”

It’s clear the life of a professional racing driver also goes hand in hand with its own specific set of challenges.  While Karun quite enjoys the PR and marketing side of motor-racing he says he finds the politics involved in motor-sport ‘exhausting’.

I’ve seen a picture this morning they’re replacing the grass and gravel at the Parabolica at Monza with a tarmac run off.  Health and safety is just ruining motorsport frankly

“It does take a lot out of you,” he says wistfully, “you spend your life constantly looking over your shoulder…  You’re always looking for someone who’s trying to steal a deal from you or trying to put you down, there’s always somebody out there – it’s a cutthroat business you know?”

“I have a few very good friends who are racing drivers, but it is difficult I think to forge really strong relationships sometimes because there will be occasions where you’re both chasing the same deal and only one of you is going to get it… It’s happened on more than one occasion.  But it’s not just me it’s happened to – I’m sure it’s happened to everybody.”

Karun also doesn’t pull any punches when discussing his fears that motorsport is losing its competitiveness by placing too much emphasis on safety.

“I’ve seen a picture this morning they’re replacing the grass and gravel at the Parabolica at Monza with a tarmac run off.  Health and safety is just ruining motorsport frankly.  I know we have to make the circuit safer and all that but they take away the challenge…  I like going to Spa but it’s lost the challenge… That’s why when you look at the lap times now at Spa for GP2 or the lower categories, the lap times are actually really close because even the not so good drivers are able to get quite close to the good drivers – because they’ve got a tarmac run off.“

“If someone was to ask me my top circuits I would say Silverstone, Suzuka, Monaco, Le Mans, Macau probably…  Monaco is one of the last remaining challenges.  I think three circuits – Monaco, Macau, Le Mans – these are road circuits which are used for racing.  There’s still an element of danger therefore the challenge is higher.  If you make a mistake, you hit the wall – you pay the price.  I mean I’ve hit the wall in all of these races and I deserved it, you know?  If you make a mistake you should hit the wall.”

Karun is currently mentoring India’s Arjun Maini in Formula 4 and, while he is not yet considering what he might do when he retires, he does mention the possibility of developing his own driver’s school.

“I’d like in the future perhaps to have an academy set up, especially out in India, to help young drivers…  I think there’s a lot I’ve learned and a lot of mistakes that I’ve made along the way in my career and if I can help somebody else to not make those mistakes and to progress in their career then there’s a degree of satisfaction I get from that.”

Has he got any general advice for any up and coming drivers?

“Walk before you can run.  You need to be smart about what steps you take on the ladder… being in the right team at the right time in the right category is probably one of the most important bits of advice I can give anybody…it’s about making good decisions really.”

For the moment though, Karun Chandhok is firmly focused on his own racing career.

“I do get a massive buzz out of driving race cars even now and I think that’s why we do it.  It’s strange because I suppose outside of being in a car I’m not exactly parachuting out of planes all the time.  But I enjoy my cycling and I love driving my car so I have my bit of adventure.  But I’m not Felix Baumgartner by any stretch of the imagination.”

He may not be attempting Baumgartner’s infamous ‘space jump’ any time soon, but to the many people who follow this pioneering driver, Karun Chandok provides a similar inspiration every time he jumps into a race-car.

How Formula E can accelerate the adoption of wireless charging