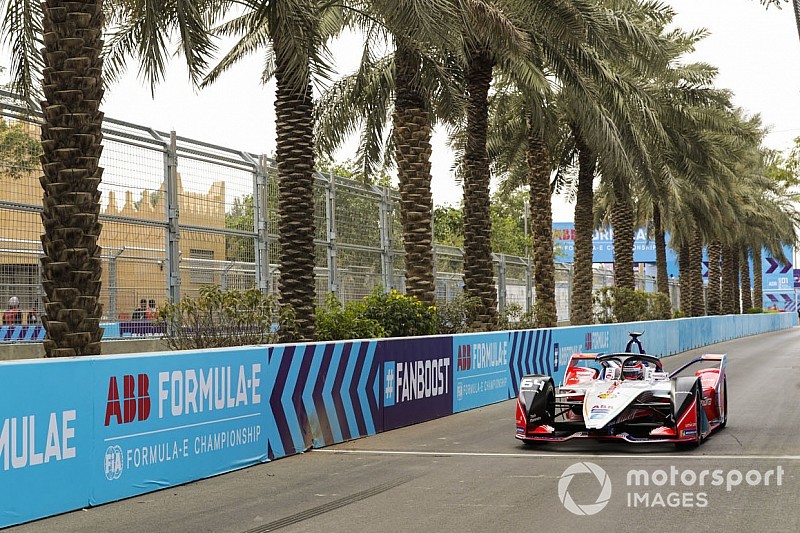 Reigning champion Jean-Eric Vergne and other ABB FIA Formula E drivers have criticised the layout for the attack mode system at this weekend’s Ad Diriyah E-Prix.

The attack mode activation zone is situated at the exit of Turn 17 at the season-opening circuit, and that corner feeds on to the track’s main straight, which will also stage the race start.

The off-line zone is located to the right-hand side of the corner exit and houses three timing loops that must be run over to activate the attack mode – which then allows drivers to use an increased power mode of 225kw.

This is much tighter than the natural corner exit and drivers will have to slow down on the racing line to make it into the zone, and run close to the right-hand wall to go over the loops.

Vergne said: “It’s a great system, it's a very good idea, but the way it has been designed for this track is not good.

“I think it's way too close out of the corner. You need to go down to 20kph.

“As a result everybody will use it under full course yellow or safety car and FE will not see what they were expecting. Right now, we [will lose] at least three, four seconds to activate the attack mode.”

NIO driver Tom Dillmann reckons the attack mode at this track will not “do what it’s expected to do”.

“We are losing a lot of time going for it, so I think many people will actually use it on the safety car to get rid of it.

“You don’t gain that much when you are on more power, because you are still limited in energy, and also you still need to save [energy]. And it’s so tight that you lose maybe two seconds to get it.

“Just going for it you might lose two places, and then to gain back those places there’s not much more power [available]. I don’t think it will be like we saw in the videos.”

“To lose time, there’s not enough gain [in return]. So either you keep like that but then you don’t lose time switching it on, or the power needs to be more.”

BMW Andretti’s Antonio Felix da Costa highlighted cars travelling at different speeds as a potential issue, but reckons “JEV expressed himself not correctly because he said ‘we’re going to lose like three seconds to activate it’”.

“Even if we do,” he added. “I don’t think that’s an issue – it’s actually cool for the racing if there’s a big loss to have a big gain. [It] will mix things up even more.

“The problem is where it is – the difference of speed within the same racing line will be different. So it’s bit dangerous for me at the moment.”

How Alejandro Agag is the Elon Musk of motorsports