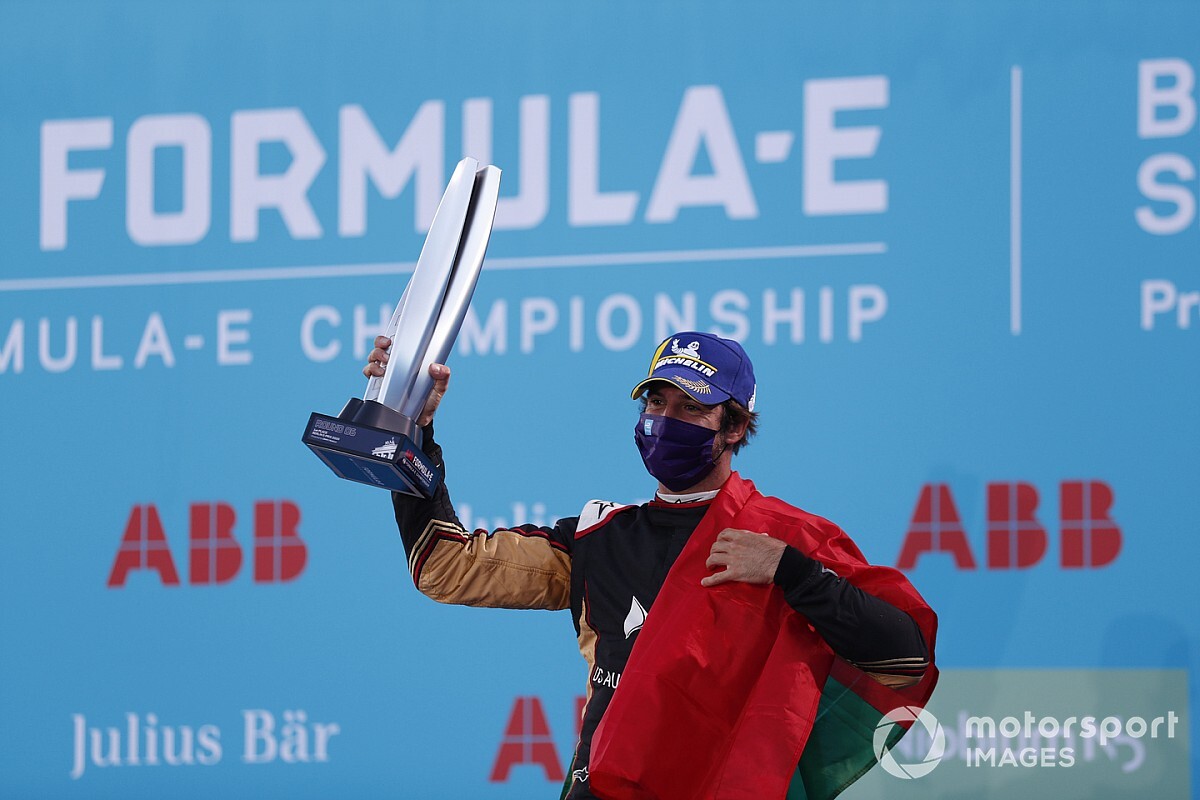 A fine start for both DS Techeetah machines left them unchallenged into Turn 1 as a superb launch from Sebastien Buemi forced Lotterer to defend with his Porsche.

That gave da Costa and Vergne clear breathing space of 2s at the end of the opening lap in an otherwise processional first phase of the race.

But Robin Frijns brought out the safety car on lap nine after shunting his Envision Virgin Racing car into the wall on the outside of Turn 2 after trying to battle past Maximilian Gunther.

Although Frijns continued in an attempt to return to the pits, he ran over the kerbs to cause terminal suspension damage and force his retirement.

After the safety car the DS Techeetah duo were unmatched at the restart, and although Lotterer was able to hang on, he missed the attack mode activation zone.

Having run off line in an attempt to collect the boost, he lost ground to the leading pair, which looked set to give DS Techeetah a 1-2 - despite complaints over radio from Vergne that da Costa was ignoring team strategy to manage the pace at the front.

In an effort to pass da Costa, Vergne then opted to activate his higher power attack mode but this became a wasted opportunity after the race was neutralised by a full-course yellow after Felipe Massa crashed at Turn 6.

As the race resumed, Vergne began to fall back suddenly, allowing da Costa to run home clear with fastest lap to his third FE triumph.

Added to his bonus points for topping his qualifying group, superpole and for snaring fastest lap - the first ever FE cleansweep - da Costa now leads by 41 points.

Lotterer was able to fight past Sam Bird - on his own remarkable recovery - to score a late second position for Porsche.

Bird had only lined up seventh on the grid, but took the strategic decision to delay taking his attack mode, which put him on a late climb up the order.

Mercedes' Nyck de Vries hung on in fourth ahead of a strong return for Mahindra Racing, led by Jerome d’Ambrosio, with Vandoorne progressing from 15th to an eventual sixth. Buemi was seventh.

Gunther was a fortunate eighth, after he tagged Mitch Evans – who was recovering to track position after battling Buemi – with the Jaguar driver spinning into the wall and down to 15th.

Alexander Sims - entering the race third in the points behind Evans - was a quiet 10th, one place ahead of double DTM champion Rene Rast.

Vergne began rapidly losing places in the final leg of the race and eventually fell to 20th after being pitched into a spin by Audi's Lucas di Grassi, who finished in ninth place.