ABB FIA Formula E has delayed shakedown for the Swiss E-Prix in Bern after track installation issues meant the full complement of walls and fences was not installed in time. 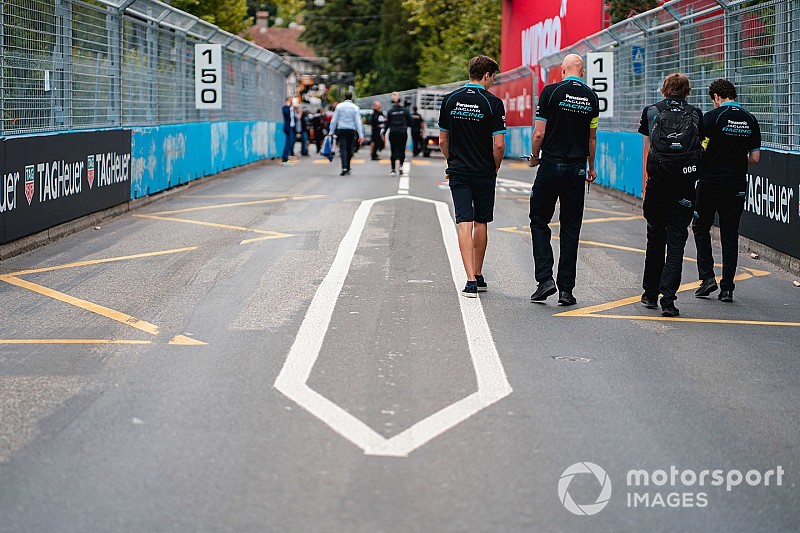 The shakedown session was due to be run at 15:00 local time in the capital of Switzerland on Friday, but is now set to take place at 17:45 and will be a shortened session of 15 minutes.

Motorsport.com understands that walls and associated fences are still being installed at several places around the 1.7-mile track.

FE and the FIA opted to delay the shakedown session to give the teams and drivers the chance to sample the new track under normal shakedown conditions, which means running in a lower 110kW mode as opposed to the standard 200kW race power level.

There had been suggestions shakedown could take place at 15:00 as expected, but in such a scenario the cars would have had to follow the safety car as no session can take place as usual until a track is finished for safety reasons.

The organisers therefore decided to provide more time to its track building team by delaying shakedown.

The possibility of running the shortened shakedown session behind the safety car remains, if the remaining track infrastructure cannot be installed by the rescheduled time.

The Bern track features steep descents and corresponding ascents for almost its entire length, with sections that are extremely narrow, along with several tight corners.

The indoor paddock is also nearly 1km from the track's pitlane, which means the cars will have to leave their garages at 17:25 to be in place for the start of shakedown at 17:45.

The team equipment in the pitlane is being housed in smaller satellite tents compared to the usual set-ups.

"Tracks that are really driver-dependent and [where] you need to have a very good car," he continued. "You have no margin for mistakes and you have to nail it.

"If you combine that [with] rain it is going to be chaos because Formula E is super hard to drive in the wet. With 250k/w it looks super quick. I'm really looking forward to drive here because I think it will be exciting driving. The race will be not so many places to overtake.

"At the bottom of the hill it will be something like 230kph which is quite quick. When you turn down that hill section [in an FE car] it would feel like 400kph at Le Mans.

"The braking [is] a lot of lateral force, but no run-off. One small mistake and the car oversteers a bit and you hit the wall."

When asked for his thoughts on how the layout of the track could impact on overtaking, HWA driver Gary Paffett told Motorsport.com that: "It's going to be a challenge because it's tight and because the straight lines aren't that straight.

"There's a lot of curves in there and off-line, there's certain bits you want to avoid because there's a big lump and you want to go to one side of it.

"Overtaking will be tough, but possible. Defending will be relatively easy here. It's Formula E so we'll find a way to get past in the end, but it won't be easy."

The "big relief" that soothed a motorsport giant

Formula E says it's up to WEC to avert date clashes