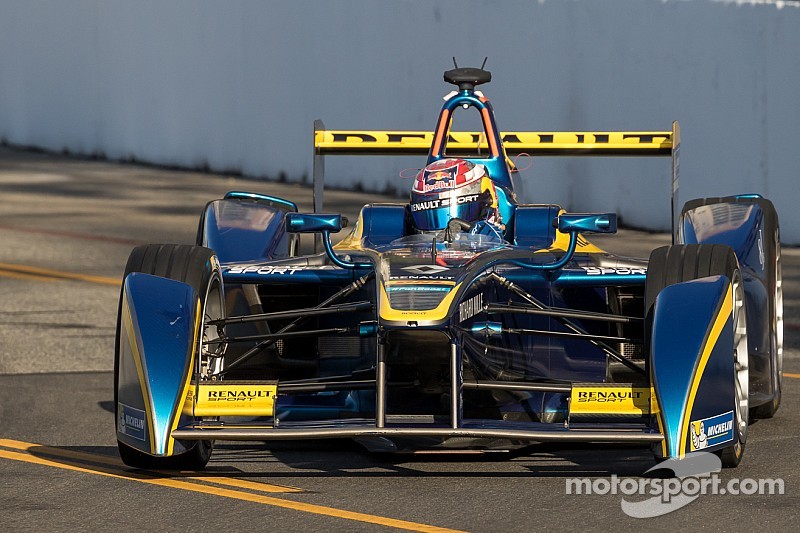 Sebastien Buemi will start round six of the FIA Formula E Championship from pole position after a thrilling qualifying session at Long Beach.

In the last of the four qualifying segments, Buemi lapped the shortened version of the classic IndyCar and Formula 1 venue in 56.853s in his e.dams car.

Daniel Abt looked to have grabbed the top spot, but Buemi just pipped him by 0.084s – although he is under investigation for his speed under a yellow flag zone, just before the session was red flagged.

"Really good, great for the team," said Buemi. "I'm quite happy after the last race, which was quite difficult for me. I've already started once from pole, so this time I hope it works out."

Abt said: "I crashed in practice, so I'm extremely happy with P2. I think it helped a bit to be in group four, but the car worked great."

Piquet, who is wearing the helmet colours of his father this weekend in honour of his first F1 victory here 35 years ago, caught Stephane Sarrazin on his quickest lap.

“It was just one of those deals,” said Piquet, who will start fourth. “I think I could have got the pole, I lost minimum one or two tenths, but no reason to get pissed.”

Erstwhile points leader Lucas di Grassi, who has suffered mechanical dramas in the last two races, was fifth fastest after setting the pace throughout practice.

But there was more drama when di Grassi’s Abt Audi car appeared to catch fire in parc ferme, and emitted a huge cloud of smoke after it was connected to a 12V battery.

Jean-Eric Vergne, who has scored two poles this year, set 57.106s at his second attempt which was enough for sixth, with Andretti Autosport teammate Scott Speed within 0.05s of him but Antonio Felix da Costa managed to get between them in seventh.