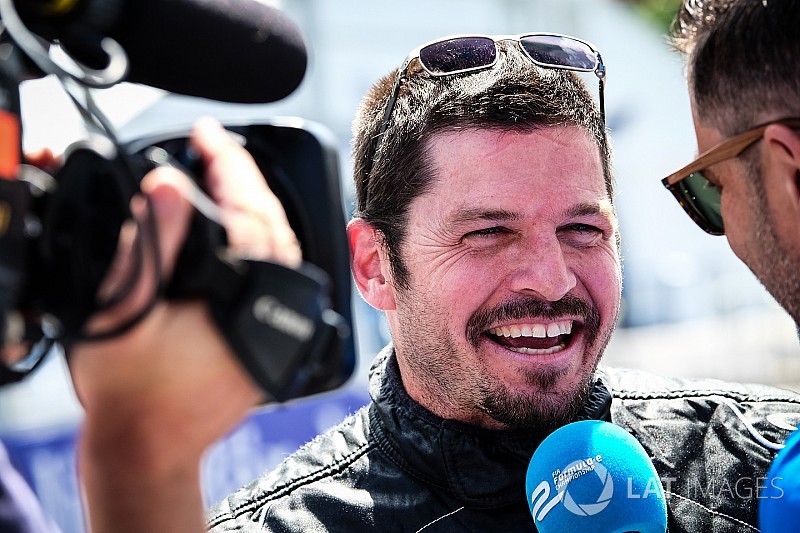 Canadian Patrick Carpentier literally fell in love with the Formula E car he drove on the streets of Montréal before the inaugural ePrix.

Last Friday, Patrick Carpentier, a former NASCAR Cup and IndyCar racer, took the wheel of the one of the series’ test car and completed a few laps around the new downtown street circuit located downtown Montréal.

Carpentier, who was also the official spokeperson of the event, was all smiles when he exited the cramped cockpit of the open-wheel electric racer after he turned a few laps. “I was very impressed with the car. It’s fast and fun to drive,” Carpentier explained. “I was amazed by the possibilities of the car. The power delivery of the electric engine is immediate, instantaneous. It seemed like I had 800 horsepower under my right foot.”

Spanish businessman Alejandro Agag, the CEO of the FIA Formula E Championship, said the double header staged on the streets of Montréal have been a great success and he then confirmed to RDS that Carpentier would have a proper test of a car this fall on the Valencia road course in Spain with the objective to prove his talent and get a full time ride in the series for the 2017/2018 season.

Carpentier, who has won five IndyCar races during his career, is a semi-retired driver. He contested two NASCAR Cup races last year and also contested a World Rallycross Championship event a few years ago. He clearly declared this past weekend that a full-time seat in the Formula E series would undoubtedly pull him out of current state of racing hibernation.

Talking to La Presse, Montréal mayor Denis Coderre said the organiser of the race Evenko was also in talks to stage a support race to the Formula E cars next year.

“Yes, I will test the series' test car on the circuit of Valencia in Spain next October,” Carpentier told Motorsport.com on Monday.

“I spoke to several people during the weekend such as Mr. Agag, FIA President Jean Todt and Mr. Coderre. Everyone wants to see me do a proper test in good conditions. Mr. Todt seemed to be very interested in seeing this happen. So I'll do the test in October and we'll see. In terms of budgets, I think that most teams, if not all, are well financed and they are not looking for paying drivers. Like I said, I'll do the test and we'll take it from there.”