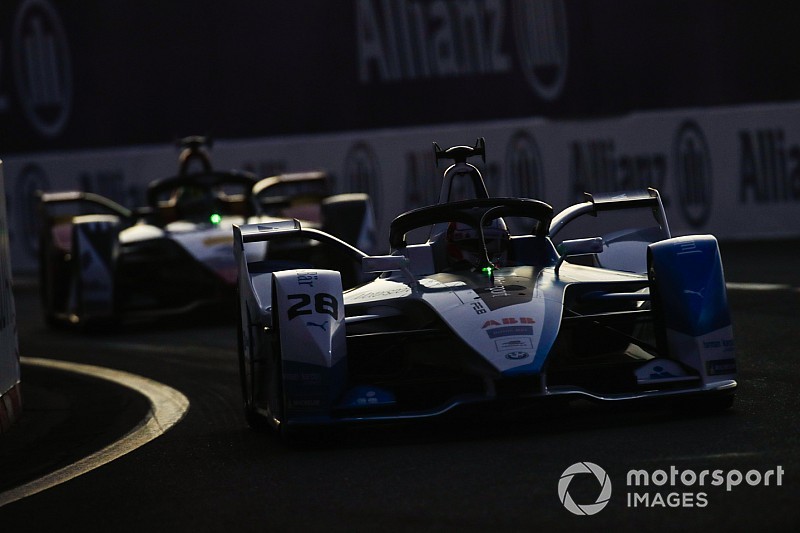 ABB FIA Formula E championship leader Antonio Felix da Costa has been given a three-place grid penalty in Marrakesh for exceeding the maximum permitted power on non-flying laps in qualifying.

The BMW Andretti driver’s car was recorded at a maximum power output of 204.92kW, and the incident occurred on his out- and in-laps during the first group stage of qualifying.

Drivers are not permitted to run above 200kW before or after their 250kW flying laps.

Da Costa drops from third to sixth as a result of the penalty.

Explaining the issue that led to the infringement, BMW team principal Roger Griffiths told Motorsport.com that “the penalty was for exceeding the power out usage on the out-lap and on the in-lap”.

“[There was] no performance advantage during the timed lap but we respect the regulations and we take the penalty.

“It was nothing the driver did wrong, it was just an unfortunate team error. It just spikes – a very short period of time.

“But the FIA has a limit and if you exceed the limit you break the regulation. The stewards understood the position but at the end of the day the rule is a rule."

When asked if the team’s software should have stopped the energy spike, Griffths said: “Yes, we just didn’t get that bit right.

“You’re allowed to exceed it – they recognise it’s very difficult to control when the wheels come off the ground and things like that and they give you a tolerance band.

“But unfortunately we exceeded the tolerance band and we got the penalty.”

Griffths outlined his belief that “two cars in superpole was a really strong performance”.

“We’re the only team that’s done that here,” he added.

“[I’m] very pleased to see Alexander up there – I think he was a little disappointed with himself in Riyadh, being so far back from his teammate he didn’t really understand it.

“And in his second race he’s put the car in superpole and is now starting fourth. So hopefully that translates into a really good result for him.

“At this point [we’re] quite encouraged, just see what we can do in the race.”

The FIA has also announced that the attack mode format for the Marrakesh race will be two activations lasting four minutes each.

This was the same format used in the season-opening race in Saudi Arabia.

Drivers are allowed to arm their attack mode systems for a maximum of five times.

The rules behind the Ferrari F1 settlement that enraged rivals