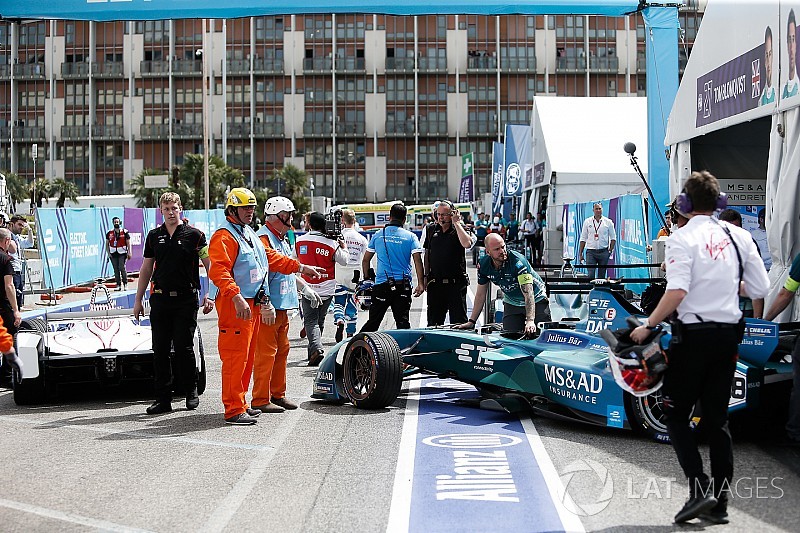 Antonio Felix da Costa has been handed a 10-place grid penalty as a result of his pitlane collision with Jose Maria Lopez during qualifying for Formula E’s first Rome race.

The Andretti team has also been fined €10,000 as it “released the car in an unsafe manner and [da Costa] then collided with car number six that was approaching in the fast lane,” according to the stewards’ decision.

Da Costa emerged from his Andretti garage just after Lopez had exited the Dragon pits and speared into his rival at low speed, pinning his car against the inside pitwall.

The two drivers were unable to take part in qualifying after the incident, which occurred during the fourth group running of the session.

“It was a mistake from us as a team,” da Costa told Motorsport.com. “One thing I’d like to say is that the person that is not a fault here at all is Lopez.

“For me as a driver – I was just following a procedure – I get released by my team and so went like I’ve been going.

“It was a little bit unlucky because the two cars are just next door to each other. If there is a small delay from either of us, we will overlap, and that happened.”

Lopez explained that there was nothing he could do to avoid the incident.

“I always try to look and see what we could have done differently – I could have maybe [have gone] quicker but I have the pit limiter.

“The thing is – it was an unsafe release from them and Felix was looking at the steering wheel.

“He was coming and I was like ‘he’s going to see me’ [and] he just hit me, and when he hit me he realised I was there.

“I accept the apology but my weekend is gone and it’s very difficult to digest because I think we had really good potential – I was P4 in FP2.

“We did everything properly – a lot of work behind to try to do a good race – and this happening hurts.

Da Costa and Lopez have been given permission to start the race despite not setting qualifying times.

Luca Filippi and Edoardo Mortara have also been given permission to start the race after failing to set representative times in qualifying.

Jerome d’Ambrosio has been given a two-place grid drop for passing the chequered flag twice in group one – he and Filippi had failed to cross the timing line in time to start their flying laps.

Mortara broke his car’s suspension during the third group running.

Da Costa will start the race from 20th, behind Lopez, d’Ambrosio, Filippi and Mortara.