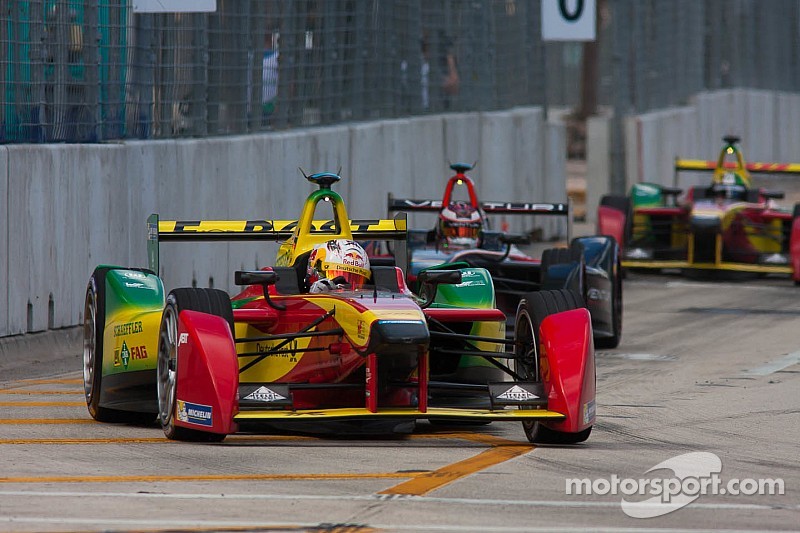 Jubilation on the podium in Miami

In third place Daniel Abt was one of the heroes in the first round of the electric racing series in the United States. A drop of bitterness: Abts team-mate Lucas di Grassi dropped all the way to ninth place due to a technical issue and had to relinquish his lead of the standings. Instead, Team ABT Sportsline improved to second place overall.

Until two rounds before the end of the race Daniel Abt even looked like the winner of Formula Es US debut. After starting from position four the 22-year-old German showed a strong first half of the race and with a perfect pit stop by his team took the lead. However, on the last of the total of 39 race laps Abt had to pay attention to his battery management and reduce speed. Instead of pushing for victory the youngster safely brought third place home, marking his first podium success since a GP3 race in September 2012.

An awesome day! A huge load has come off my chest and I must admit that on the run-off lap I even had some tears in my eyes.

Abts team-mate Lucas di Grassi had hopes of taking a trophy for a long time as well. The Brazilian, who had already been on the podium three times this season and won the Formula E inaugural race, had started from position six. He, too, made up positions with strong lap times and a perfect stop including the car change and was running in third place for a long time. In the final quarter of the race, however, the temperature of his battery rose so much that the power was reduced. Battling with dull weapons, di Grassi dropped all the way to ninth place.

Team ABT Sportsline, the only German outfit in the international field, has scored an amazing fourth time in five races with both drivers. The well-deserved reward: The team based in Kempten advanced to second place in the overall standings. Before the beginning of the second half of the season Lucas di Grassi, with a gap of merely seven points, is ranking in second place as well. He had been leading the standings since the beginning of the season and, most recently, retired or lost positions twice due to technical issues that were neither the teams nor the drivers fault.

The round in Miami was the fifth of eleven races of the FIA Formula E Championship that includes visits to Asia, Uruguay, Argentina, the USA, Monaco, Russia, Great Britain and Germany. The sixth race will follow in just three weeks from now and be held in North America as well. On 4 April 2015 Daniel Abt and company will be competing in the streets of Long Beach (USA).

Drivers and team director thats what they say

Hans-Jürgen Abt, team director: "A day of mixed emotions at the end of which the joy about Daniels strong showing prevails. We saw another unique Formula E event, in a great location and in front of a tremendous crowd. Im incredibly happy for Daniel. Hes been going through some rough times but has always held his head up high and never gave up. I wish for him to have finally broken his duck. Of course were upset about the problems on Lucas car. But were going to carefully analyse what the causes are and then travel to Long Beach superbly prepared, for one thing is clear: the fans can look forward to a gripping second half of the season."

Daniel Abt (D, 22, #66): "An awesome day! A huge load has come off my chest and I must admit that on the run-off lap I even had some tears in my eyes. This podium marks the end of a tough time for me: although in GP2 and also in the first Formula E races I had the performance something always prevented me from clinching a result in the points. Today everything simply fit together. This success is special also because my whole family was here. Naturally, Im hoping for this trophy to mark the start of a strong second half of the season in Formula E."

Lucas di Grassi (BR, 30, #11): "Congratulations to Daniel! He honestly deserves this result and the trophy. I personally had problems with my battery temperature and as a result had only a reduced output on the final laps. Otherwise a podium would have been possible, so ninth place is just a matter of limiting the damage. But were looking ahead. Were going to carefully analyse what the problem was, correct it and then strike back in Long Beach. Were racing again in just three weeks from now."

An energetic start to Formula E in Miami