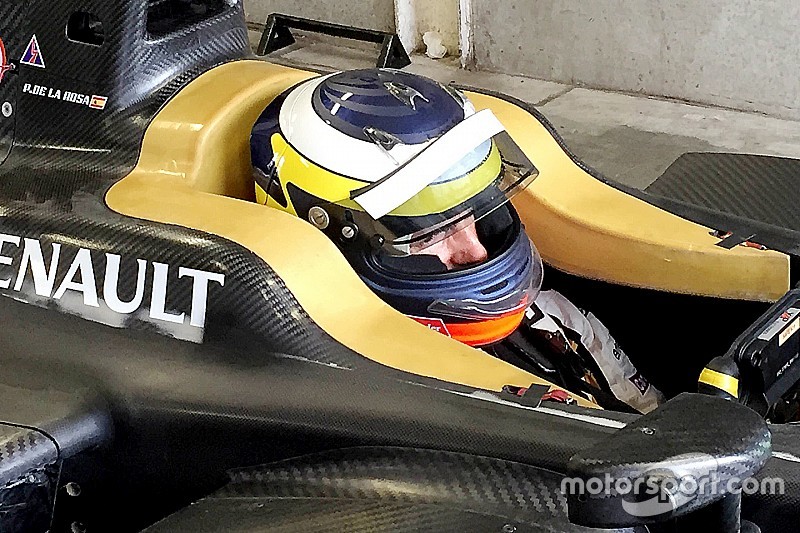 De la Rosa got his first taste of Formula E action at Donington with Team Aguri.

What did you think about the Team Aguri Formula E car today?

De la Rosa: "It was interesting, very interesting this morning before the rain came. You don't feel the engine or the vibrations.

"I found it difficult to feel the tyres because the wheelspin and the rear end is hard to feel. But, it is still a single-seater and it seems the same but feels different. The feeling of speed is still there because there is less mechanical grip. You still have to drive on the limit, it is not easy."

"It didn't take me long to adapt. It is always easier when you have the same engine power but when it changes and you start altering the maps, the steps are dramatic.

"I really enjoyed it and I understand now why drivers say it is a very challenging package to master."

How did the test with Team Aguri come about?

De la Rosa: "It started at Battersea Park actually. I saw in the paddock and in the pits many familiar faces from my time in F1 with Arrows, Jaguar and McLaren. I know Mark Preston (Aguri team principal) from McLaren days and Keith Smout (Aguri commercial director) from our time at Jaguar.

"It was one of the good things from when I went to the Battersea race that I saw a lot of F1 people and friends. This is when I realised that the Formula E Championship was at an even higher level to what I had seen on TV."

Have you been following the Formula E championship in its maiden season?

De la Rosa: "Yes, I have both on TV and at the track. I think the level and interest is building race by race. It is competitive and different and I saw this up close at Battersea. I could see the level was high and I wanted to see it and feel it for myself."

What are plans for more testing or even racing in season two?

De la Rosa: "At the moment this is just an exploration for both sides really. It is too early to say if I will race or not. I am here and I wanted to have a go and Team Aguri was good enough to let me try it. The team looks very attractive on the outside and they have a good engineering team and good plans for the future.

"As I said it is early days for me, but if I do it then it will be at 100 per cent. I need to learn a lot more but that is why I did the test – to learn everything I could. We'll see what happens after this test."

How do you appraise what Formula E has achieved so far?

De la Rosa: "It is incredible really what Alejandro [Agag] and his team have achieved this season, their first season. The need to have a championship like this is obvious because it is all about the future. Racing needs to be a lot wider than just F1. It is very, very interesting.

"This I like very much because I have great memories of racing at Monaco, Montreal and Melbourne where the races are a big event.

"This is the shared vision of Alejandro and his team and I think it needs to be applauded because it takes racing to the fans rather than taking fans to the racing, and it gets new enthusiasts engaged."

Hans-Jürgen Abt: "Formula E is a model for success"