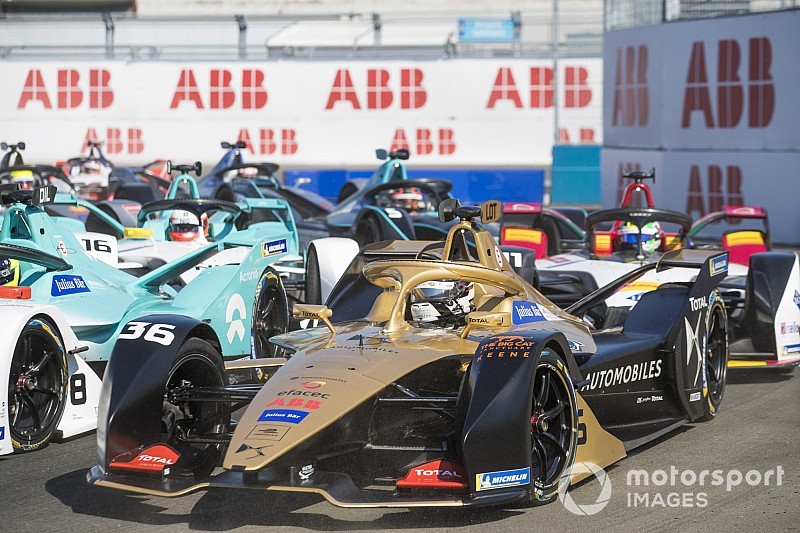 A protest lodged by FIA Formula E outfit DS Techeetah against the driving standards of Audi’s Lucas di Grassi in a New York E-Prix pile-up was rejected by the stewards.

The DS Techeetah protest concerned an incident from on lap two of the 36-lap race that chiefly involved di Grassi and the team's two drivers Andre Lotterer and Jean-Eric Vergne.

The sporting rule cited in the protest – Article 30.12 – states: “At no time may a car be driven unnecessarily slowly, erratically or in a manner which could be deemed potentially dangerous to other drivers or any other person.

“This will apply whether any such car is being driven on the track, the pit entry or the pitlane.”

In the aftermath of Sam Bird spinning Jose Maria Lopez at the Turn 6 90-degree left, the track was briefly blocked, with all cars running lower than sixth caught up in the aftermath.

Championship leader Vergne hit the back of Gary Paffett, while Lotterer went into the back Vergne and di Grassi struck the rear of Lotterer’s car.

All the cars were able to escape the incident, but the two DS Techeetah drivers had to pit for repairs – Vergne with a left-rear puncture and nose damage, and Lotterer with heavy front-end damage.

After the race, DS Techeetah launched a protest, claiming di Grassi had breached Article 30.12 and alleging he had “continuously pushed car 36, Lotterer, until he spun around”, per an FIA bulletin.

But the stewards rejected DS Techeetah’s protest, saying Bird had already been punished - with a 10-second penalty - for causing the original track blockage by spinning Lopez and ruling that the contact between Vergne, Lotterer and di Grassi was a result of the blockage.

An FIA bulletin said “no breach by any of the drivers [following Bird and Lopez] was evident and that these collisions were an unavoidable consequence of the contact between cars 2 [Bird] and 7 [Lopez]”.

The bulletin continued, stating DS Techeetah “called evidence from the driver of car 36 [Lotterer] who said that he came upon the accident scene, braked heavily and was hit from behind and his car was turned left into the wall”.

It added: “He said that despite his brakes being locked, the rear of his car was lifted by the contact from behind and his car was continually pushed by car 11 [di Grassi].

“Car 11 managed to get past and continued the race. The respondent [Audi/di Grassi] denied the breach and the driver of car 11 gave evidence that when he arrived at the incident, he braked heavily and was hit from behind. He denied having pushed Car 36 deliberately.

“The stewards and the parties reviewed the available broadcast and CCTV footage of the incident and brake and throttle data from both cars.

“That evidence was inconclusive and did not cause the stewards to depart from their original judgment made during the race that the collisions behind cars 2 [Bird] and 7 [Lopez] were an unavoidable consequence.

“The breach of the rules alleged against the driver of Car 11 was not established on the evidence.” 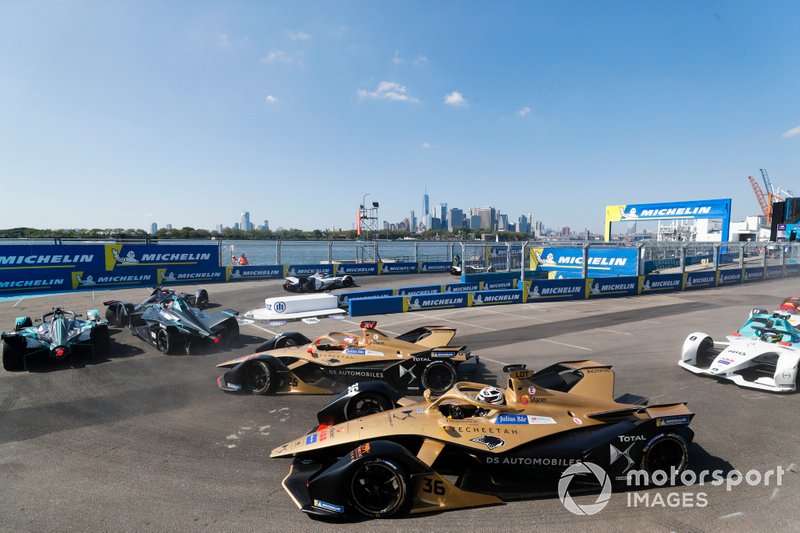 The stewards also determined that neither Vergne, nor Felipe Massa were to blame for their collision in the closing stages of the race.

Vergne and Massa clashed at the Turn 2 right-hander on the final lap of the race as they fought over ninth place.

Vergne dived to the inside of Massa’s Venturi-run car at the preceeding Turn 1 switchback and the pair made contact away from the apex of the corner, with Vergne forced deep but still alongside Massa.

They then came together again, with Vergne hitting the Turn 2 inside wall, heavily damaging the front of his car and spinning Massa.

Massa was subsequently hit by Jerome d’Ambrosio and Lotterer, while Vergne was run into by Stoffel Vandoorne – although all those drivers were able to escape the brief entanglement and finish the race.

An FIA bulletin explaining the outcome read: “The stewards have examined the video evidence and heard evidence from the drivers of car 19 [Massa] and car 25 [Vergne], determined neither driver was primarily at fault for the incident.

“Telemetry data from both cars on the lap in question and previous laps showed that neither car took Turn 1 in an unusual manner.

“There was incidental contact in the middle of Turn 1 under braking. Car 25 was offline on dirty pavement at the exit of Turn 1 and was attempting to regain the course at the entrance of Turn 2 when contact occurred.

“While car 19 could have allowed more room at Turn 2 neither driver was primarily at fault for the collision. The stewards take no further action.”

The two drivers disagreed on who was to blame for the incident, with Vergne telling Motorsport.com: “I tried to pass him so he crossed me.

“I don’t know what went through his mind but he completely squeezed me into the wall, kept his line, didn’t give me any room.”

In a Venturi statement, Massa said: “He tried a kamikaze move on the brakes at the end of the main straight.

“When I saw him coming, I knew he would not be able to stop. In the end, it created a huge accident. He destroyed my race and destroyed his championship today.”

In a third post-race investigation, no further action was taken against Edoardo Mortara and Oliver Rowland regarding their clash at the exit of Turn 10 on lap 28 that ultimately eliminated Mortara and caused major damage to the front of Rowland’s Nissan e.dams car.