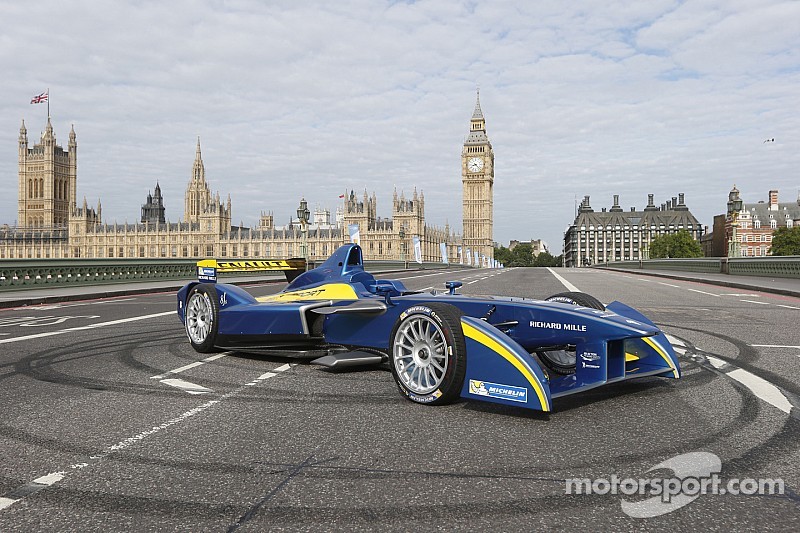 On 13 September, motorsport will enter a new era with the first ever FIA Formula-e race, staged in China on the streets of Beijing.

Contested in 200kW (270bhp) electric single-seater race cars, this championship is set to provide an important framework for research and development into “zero- emissions”* vehicles.

Highly committed to electric vehicles with its Z.E.** range, Renault provided its expertise in the design of the Spark-Renault SRT_01E, the car that will be used by the ten teams competing in the championship.

Renault is equally the title partner of the e.dams team set up by Alain Prost and Jean-Paul Driot. Sébastien Buemi and Nicolas Prost are the drivers tasked with competing on behalf of e.dams-Renault during the ten rounds of the inaugural season of the FIA Formula-e championship.

From Formula 1 to the World Series by Renault, Renault is already heavily involved in motorsport. What persuaded you to invest in this FIA Formula-e championship? “The fact that we are already involved many different competitions is the very reason we are interested in Formula-e. For Renault, it was obvious that we had to be a part of this new venture. This is a unique and highly innovative experience, which is set to give motorsport a totally new look. This new direction is entirely in keeping with the development of the all-electric Renault Z.E. range, which already features four models.”

How did the engineers from Renault Sport and the other entities involved in designing the race car work together? “I think it’s fair to say that Spark-Renault SRT_01E was a joint effort. Renault, Dallara, McLaren, Williams and Michelin: it’s very significant that so many big names from the world of motorsport have all worked together on a project that is most definitely geared towards the future. All the engineers and technicians were very enthusiastic and excited during the creation of the car.

Everybody strived, in their specialist area, to improve the slightest detail in order to provide the teams with reliable and quick race cars for the very first race. However, our work is not yet done: we will be on hand at all of the races to provide the teams and drivers with the same kind of technical assistance we offer at the championships we organise.”

Renault is one of the five founding partners and is the technical partner of the Formula-e championship, but it is also the title partner for the e.dams-Renault team… “Yes, we wanted to show our commitment to the new championship and benefit from some additional media coverage. Once again, it seemed obvious that we should join forces with Alain Prost and Jean-Paul Driot’s team.

Alain Prost has a long, shared history with Renault and is also ambassador for the Brand. The competitive records of these two greats speak for themselves, and we know that they will do everything in their power to ensure e.dams-Renault does well. The performances of Sébastien Buemi and Nicolas Prost during recent tests were also very encouraging.”

In all areas, the FIA Formula-e championship breaks new ground. Race cars, teams, circuits and sporting format: everything is new in this competition, which is based on three core values: Energy, Environment and Entertainment.

As early as 2011, the FIA (Fédération Internationale de l’Automobile) stated its desire to see a fully-electric racing series. In line with the challenges facing the motor industry, the championship is expected to serve as a framework for research, whilst also driving interest among the general public in electric cars and promoting sustainability. Combining engineering, technology, sport, science, music and entertainment, the plans of Alejandro Agag – the Spanish businessman already involved in motorsport – were approved by the FIA on 27 August 2012. The championship promoter then entrusted Spark Racing Technology with the job of designing and building the first forty

Formula E single-seater race cars. Among the technical partners involved in this venture, Renault played a central role in becoming the architect of the electric powertrain.

The vast majority of electric vehicles are currently driven in cities. The same will apply to Formula-e races, which will be held at ten city-centre circuits, on the streets of some of the planet’s greatest cities. Starting in September and concluding in June of the following year, the race calendar complements that of F1 and the World Series by Renault.

The FIA Formula-e championship is open to ten teams, each with two cars. A very high quality field is set to contest the inaugural season, since ten of the ten of the confirmed drivers have already competed in Formula 1 at some stage of their career. At the meetings, the drivers will all have two single-seater race cars that they may use as they see fit. The races will feature one mandatory change of car.

Each meeting will use the same organisation. All rounds will be one-day events, ensuring disruption is limited for the host city and local residents, whilst also keeping running costs down for the teams. There will be no shortage of action for fans, and the low noise levels of the cars means that it will even be possible to organise concerts during the races! In the morning, two practice sessions will give the drivers and teams time to familiarise themselves with the layout of the circuit and to fine-tune their set-ups. Just after midday, qualifying will be split into four ten-minute sessions, with five cars challenging for pole position in each group.

The driver that takes pole position will be given three bonus points and the driver that sets the fastest race lap will earn two points. The title of Drivers’ World Champion will be awarded to whoever has the most points at the end of the season, with drivers able to discard their poorest result. The Constructors’ World Championship will be decided by counting all results for both cars.

*   No CO2, no regulated atmospheric pollutants, while driving.