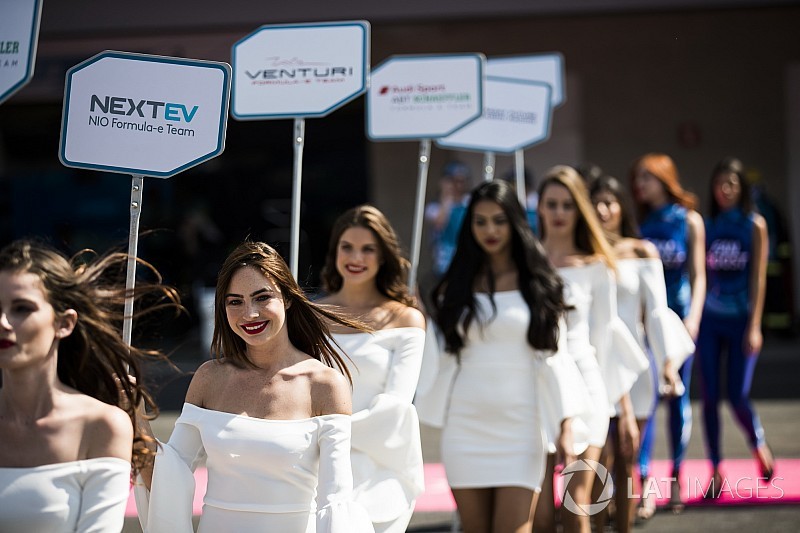 Formula E will continue to incorporate grid girls into future races despite a series' statement claiming Formula 1 had only just joined the 21st century by dropping them.

F1 announced last week it would halt the tradition, which was met by a "welcome to the 21st century" message from FE and the claim it had "stopped using grid girls last year".

This was a reference to FE using 'grid kids' for its 2016/17 season finale in Montreal, a concept that has continued in the 2017/18 season for the races in Marrakech last month and Santiago last weekend.

However, the opening round of the season in Hong Kong featured grid girls at the request of the local promoter.

Series CEO Alejandro Agag told Motorsport.com that he felt "grid girls should be part of motorsport" and could feature in the series again.

"For me, it's not the most relevant issue today," he said. "It should be a non-issue. Sometimes we use kids, sometimes we should use grid girls.

"They haven't done anything bad, it's part of the visual tradition of motorsport. I am not an enemy of the concept of grid girls at all.

"Formula E will have grid girls. Maybe not in every race, but I think they are part of the tradition of motorsport."

When F1's decision was announced, commercial chief Sean Bratches said using grid girls "does not resonate with our brand values and clearly is at odds with modern day societal norms".

It has since announced a similar initiative to FE to invite youngsters and aspiring race drivers onto the grid, but CEO Chase Carey has also revealed it will work to "maintain glamour" and part of that will include having "pretty girls at races".

According to The Daily Telegraph, Carey said: "I think it's a part of life, and it's a part of what makes our sport special. It is a sport of glamour and of mystique.

"But I think you have to continue to evolve. In today's world there are obviously different sensitivities to 10-12 years ago. I don't think you can just be stubborn."

He added: "If a meaningful number of people don't agree with something, I think you have to respect that. But we will continue to be a sport with glamour, with excitement – and with pretty girls."

The National Guard leaving NASCAR - They made the right decision

The master plan to turn around FE's perennial struggler