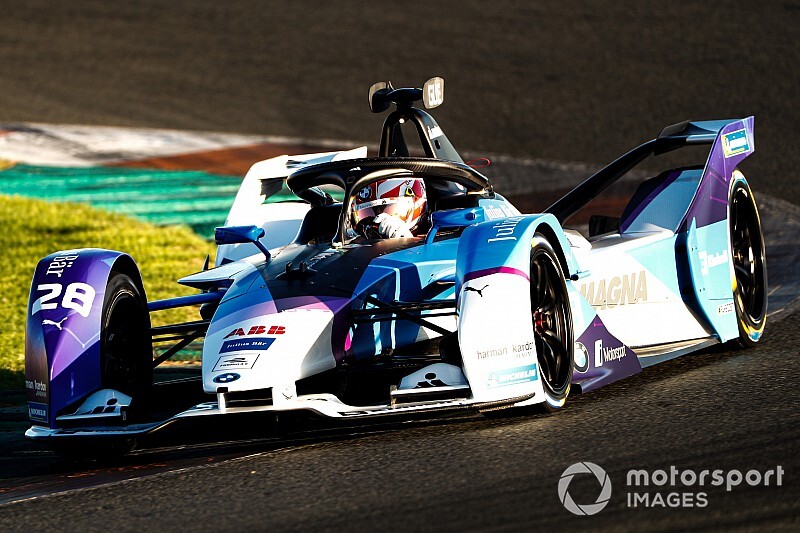 Gunther’s best time – a 1m15.926s set on his final lap of the morning session – is 1.051 seconds quicker than the fastest time from last year’s pre-season test, a 1m16.977s posted by his BMW predecessor Antonio Felix da Costa.

After the initial laps of Tuesday morning had been dedicated to installation running, Porsche’s Andre Lotterer moved to the head of the times with a 1m16.650s.

Lotterer stayed in first place until just past the halfway mark of the three-hour session, when he was deposed by Gunther’s effort of 1m16.228s.

Reigning FE champion Jean-Eric Vergne then moved to the top of the times on a 1m16.193s as most of the field began to set times quicker than the 2018 benchmark.

Da Costa replaced new teammate Vergne in first place towards the end of the morning with a time of 1m16.032s on a lap that featured a significant improvement in the final sector.

But Gunther took the top spot away from da Costa just after the chequered flag had fallen to lead by 0.106s heading into the two-hour lunchbreak.

The morning running was interrupted by three red flags – the first of which was caused by new Jaguar recruit James Calado hitting the wall at the chicane on the start/finish straight after 20 minutes of the first hour had passed. Calado went on to finish the morning running in 21st place.

The third red flag occurred 20 minutes before the lunch break when Porsche’s Neel Jani, who was classified 19th, stopped at the pit exit.

The middle stoppage was caused by de Vries stopping his Mercedes at the left-hand Turn 10 kink at the far side of the circuit at the start of the second hour.

It took over 15 minutes for the 2019 Formula 2 champion’s car to be recovered, after which he did not return to the track and was classified 23rd.

A Mercedes spokesperson told Motorsport.com that a technical issue resulted in a blown battery fuse, which caused de Vries to pull over. The team is investigating the issue and is changing the necessary components so de Vries can drive again in the afternoon.

His Mercedes teammate Stoffel Vandoorne was 20th in the morning running.