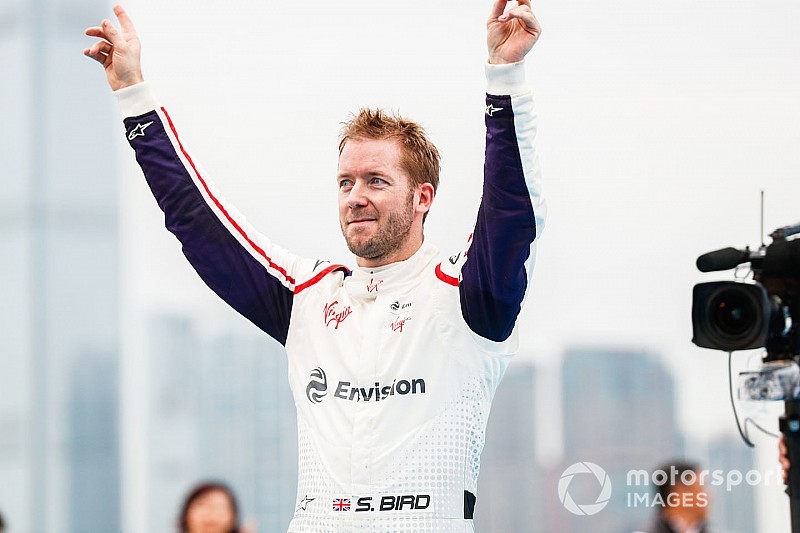 Lotterer had led the fifth race of the 2018/19 FE season since the eighth tour of what would go on to be a 36-lap race, when Bird lost the lead by sliding deep at the 90-degree right of Turn 2.

The duo the engaged in a tight battle for the lead for the rest of the race, which went through three safety car periods and a red flag.

At the final restart, Bird continued to pressure Lotterer and on what would be the penultimate lap they made contact going into Turn 2, with Bird nudging the DS Techeetah driver’s right rear tyre.

It looked as if Lotterer would hang on but as they approached the start of the final lap his right rear tyre punctured and he fell to the back of the order, gifting Bird the lead.

The event took place in greasy conditions after rain showers had hit Hong Kong throughout Sunday, although none fell during FE’s 50th race.

At the start, Oliver Rowland had rocketed off the line from second on the grid to take the lead from polesitter Stoffel Vandoorne on the run to the Turn 1 hairpin, while Bird shot around the outside of the approach to the right hander to move from seventh on the grid to fourth.

Bird then pressed Lotterer, who he had clipped as he slid into Turn 1, as the pack went into the Turns 3/4 chicane to move into third place.

He then caught Vandoorne at the start of the second lap and got alongside coming out of Turn 1, sealing second as they raced up the long straight and into Turn 2.

But the race was then halted when Felipe Nasr went into the barriers at the outside of Turn 2, and the Dragon driver’s stricken car was hit by Pascal Wehrlein and his Mahindra Racing teammate Jerome D’Ambrosio.

The incident put all three drivers out on the spot, and a full course yellow was initially called before it was upgraded to a full safety car and then a red flag, with Rowland leading the pack back to the pitlane.

When the race resumed, with the rest clock reset to just under 36-minutes remaining, most of the field took their first attack mode usage.

Rowland led for a lap before losing the lead to Bird when he appeared to lose drive coming out of the first corner.

That promoted Bird into the lead that he would hold for just a lap before he went deep at Turn 2 and set up his long chase of Lotterer, with the duo mirroring attack mode strategies by taking it for the second time when the race resumed following the second safety car.

That stoppage had been caused by HWA’s Vandoorne stopping with a suspected driveshaft problem at the exit of Turn 7.

A third safety car was called when Rowland stopped the same spot on lap 30. The Nissan e.dams driver had damage to the right-front and left rear of his car.

Mortara held off a late surge from di Grassi, who had the advantage of attack mode at that point to take his second podium in a row.

Jean-Eric Vergne finished 13th after an eventful race that involved a near crash at Turn 1 early-on, and a clash with Tom Dillmann (who was 12th for NIO), for which the reigning champion was given a five-second penalty.

The other non-finishers were Sebastien Buemi and Alexander Sims, who retired in the pits after clipping the wall at Turn 5 late-on, and Nelson Piquet Jr.

Piquet stopped at the end of the first lap due to suspected damage to his front suspension.