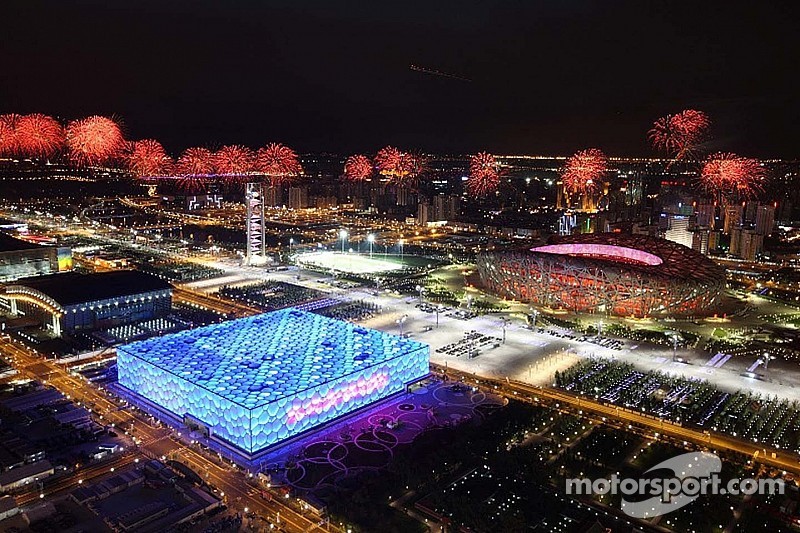 The inaugural Formula E ePrix will take place this weekend on the streets of China's capital city.

Just a few days remain before the latest chapter in the long, but sporadic history of racing in Beijing is written. Work is almost complete on the Olympic Park track that will host the Formula E race on September 13, an event that will go down in history as the first all-electric international motorsport competition.

It’s now 10 years since the Chinese Grand Prix, held at the Shanghai International Circuit, first appeared on the Formula 1 calendar – an event that has accelerated the growth of motorsport in the world’s most heavily populated country. But motor racing in the Chinese capital of Beijing goes back much further than that.

Beijing first featured in an internationally recognised race over 100 years ago. Then known as Peking, the city was the starting point of the Peking to Paris rally in 1907. Five cars took part in the event that was won by the Italian Prince, Scipio Borghese driving a four-cylinder Itala. The drivers followed no regulations as they raced for almost 10,000 miles through China and across Russia, reporting their positions back to Europe via telegrams in towns the passed along the route.

For the drivers, it will be a tremendous challenge to learn the limits of this track quickly, as well as to understand the best overtaking opportunities

The race even featured one of motor racing’s first tyre wars as Borghese used Pirellis and the second-placed Spyker of Charles Goddard was fitted with Michelins. Hazards were plentiful, as the journalist Luigi Barzini – who accompanied Borghese – recalled in his 1908 book Peking to Paris, which featured hundreds of pictures, many of which depicted incidents the competitors were fortunate to escape from uninjured.

A magnum of Mumm champagne was Borghese’s reward for winning an event that has lasted exactly two months!

Scores of international conflicts that occurred in the intervening decades meant that it was 90 years before the event was run again. In 1997, the Peking to Paris Motor Challenge revived the event, taking 45 days and a southern route via India, Iran, Turkey, Greece and Italy.

Since then it’s become a semi-permanent fixture on the historic racing calendar, with events running in 2005, ‘07 and 2013. The next one is scheduled for 2015.

There have been two street races staged in Beijing before, both of them organised by the owners of the China Racing Formula E team.

The pit lane is also unique and requires some special practice to get right.

Lucas di Grassi on the challenges that the Beijing circuit presents

The first was part of the 2006/2007 A1GP season on a street track in the Yizhuang district of the city. The circuit had to be shortened after the first practice session as the cars were unable to negotiate the extremely tight turn 8 hairpin.

Despite the late layout change, the event went ahead and the sprint race was won by Jeroen Bleekemolen for Team Netherlands, while Enrico Toccacelo won the feature race for Team Italy. A Chinese round remained on the calendar for the rest of the series’ existence, with two rounds taking place at Zhuhai and Shanghai the following year and at Chengdu the season that.

Single-seater racing was back on the streets of Beijing in 2010 with a non-championship round of the Superleague Formula series. The track was built around the Shunyi Olympic Rowing-Canoeing Park. The first race was won by Craig Dolby driving the Team Tottenham Hotspur entry while Alvaro Parente claimed victory in the second racing for Team FC Porto.

A number of purpose-built circuits have been constructed in China in recent years. These include the 2.391km Goldenport race track in Jinzhanxiang, in the Chaoyang District of Beijing. The track has been used by numerous racing series since its completion in 2001 including Formula Renault Asia, Formula BMW Pacific, China Superbike Championship and the Porsche Carrera Cup Asia.

The circuit also hosted one round of the FIA GT1 championship in 2011 and this year it will feature in the World Touring Car Championship with races taking place on October 4 and 5.

Before then attention turns back to the streets of Beijing and the stunning backdrop of Beijing’s world famous Olympic Park. The track Formula E will make its world debut on is 3.44km long and features 20 corners – the perfect surroundings to demonstrate the capabilities of the Spark-Renault SRT­_01E.

"The Beijing track is an amazing facility,” says Audi Sport Abt driver Lucas di Grassi. “For the drivers, it will be a tremendous challenge to learn the limits of this track quickly, as well as to understand the best overtaking opportunities. The most obvious places are likely to be Turns 1, 2, 6, 19 and 20.

“The circuit will also require lots of traction and braking stability, while the energy recuperation at braking zones will help to stabilise the car. Also, it will be our first ever race, so all the drivers will be raring to go! The pit lane is also unique and requires some special practice to get right."

To cast your FanBoost vote for the Beijing ePrix click here.